Sometimes trading is easy, sometimes it's not. But certain rules apply at all times. The trend is your friend. Get out of bad trades. When there's nothing to do, do nothing. And today's lesson: Go with what's working.

In the oil market, we've had a period of relative quiet -- at least as far as the oil price is concerned. We've been bouncing back and forth between $51 and $55 a barrel since the beginning of the year. Analysts have done little in the last two months besides guess where oil is headed next. One week, they're all convinced of a breakout; the next, they're sure that markets are ready to collapse.

One rule of thumb we've applied is to do nothing when there's nothing to do -- in the last weeks, we've refrained from messing around with our core energy picks of independent U.S. exploration and production companies working in the Permian basin. And now, looking at the way oil stocks have reacted in the last month, we've seen again that those tried and true rules of investing are true for a reason.

Natural gas stocks have done nothing. Refining has been a disaster. Oil services have been drifting lower. Offshore stocks have continued to be bottom-of-the-barrel.

But our core players in the Permian continue to progress. And beyond that, there have been opportunities to add to positions on recent dips that have proven profitable in core names like Cimarex (XEC) , Anadarko Petroleum (APC) and for other Permian stalwarts like Pioneer Natural Resource (PXD) , Concho Resources (CXO) and Diamondback Resources (FANG) . APC is a holding of Action Alerts PLUS.

One chart to continue to keep you on this straight and narrow path -- the latest short-term oil projections from the Energy Information Agency (EIA) -- includes the increases in rigs and production for shale players here in the U.S.: 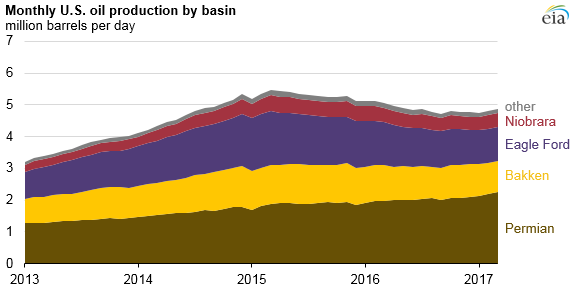 It's a longer term view, but makes the trend incredibly clear: In the last two years, with U.S. production dropping close to a million barrels, there still was an increasing profile of production from only one shale play -- the Permian.

We can make all sorts of fancy rationales for investing in the Bakken or Eagle Ford instead -- only the most mature players remain in those plays, the average cost of acreage is a fraction of what's being paid in the Permian, the efficiency margins that have been gained have had the greatest impacts in those better developed areas, etc.

But as I said at the start of this column, sometimes trading is easy and sometimes it's not -- but adhering to the golden rules can usually keep you out of major trouble.

All the money continues to flow into one area in the U.S., and the trades in those producers continue to work.

And for now, at least until something changes, that's all you need to know.

Get an email alert each time I write an article for Real Money. Click the "+Follow" next to my byline to this article.
TAGS: Commodities | Markets | Energy | Investing | Oil Equipment/Services | Stocks