Laser manufacturer Coherent  (COHR) has made a huge upside run in the past year, which is just part of a longer-term advance that has further to go, in my opinion. Let's check the latest charts and indicators for some guidance.

In this one-year daily bar chart of COHR, below, we can see that COHR traded sideways around $90 for several months in early 2016. This sideways consolidation was the base for the strong price gains we can see from early November.

The On-Balance-Volume (OBV) line has moved higher the over past year, telling us that buyers of COHR have been more aggressive -- with more shares of COHR traded on days when it has closed higher. The trend-following Moving Average Convergence Divergence (MACD) oscillator has been above the zero line for much of the past year and remains in a bullish configuration. A price gap earlier this month with strong volume could become a runaway, or measuring gap.

This longer-term weekly chart of COHR, above, shows a two-year base from around the $60 level. Similar to the consolidation around $90, the $60 level can be a starting point for price targets like $120, $180 and $240. Prices are above the rising, 40-week moving average line -- maybe too far above it. The weekly OBV line has moved up to confirm the price advance and the MACD oscillator is very bullish on this timeframe. 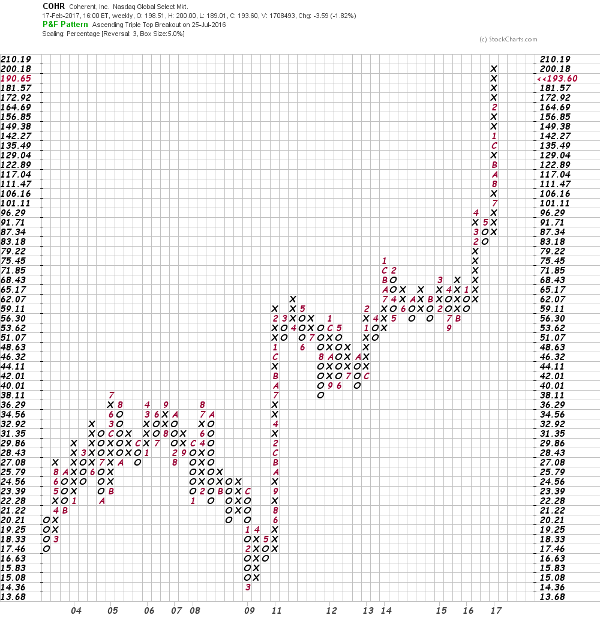 In this long-term Point and Figure chart of COHR, above, we used 5% moves instead of a fixed dollar amount. The recent "straight-up" advance could probably use a period of consolidation, but what I want to see happen and what a stock decides to do can be two different things.

Bottom line: COHR could consolidate or trade sideways around $190 to $200, as there seems to be little indication that prices are going to decline. This sideways price action could last a couple of weeks, looking at some of the prior consolidations. A close above $202 could engage the bull again, with $240 as our next price objective.