Century Aluminum  (CENX) broke out of a long base formation in November, but the really impressive breakout happened in January.

CENX has been consolidating its January gains but could soon be ready for new heights in the near term.

In this one-year daily chart of CENX, above, we can see a long consolidation between $5.50 and $9 or a longer pattern between $5.50 and around $10.50. Notice the heavier volume in the beginning of the pattern back in March and April and the heavier volume in November and December. The lighter volume in the middle of the pattern is not unusual and could be considered typical of a saucer-like pattern. A bullish golden cross occurs early in the pattern in late March, but the slopes of the 50-day and 200-day moving averages do not really turn positive until November. The On-Balance-Volume (OBV) line shows a rising pattern for the entire 12 months and supports a bull case. Momentum is not diverging from the price action.

In this three-year weekly chart of CENX, above, we can see prices above the rising 40-week moving average line. The weekly OBV line has been positive the past year and the MACD oscillator crossed the zero line in November for an outright go-long signal. 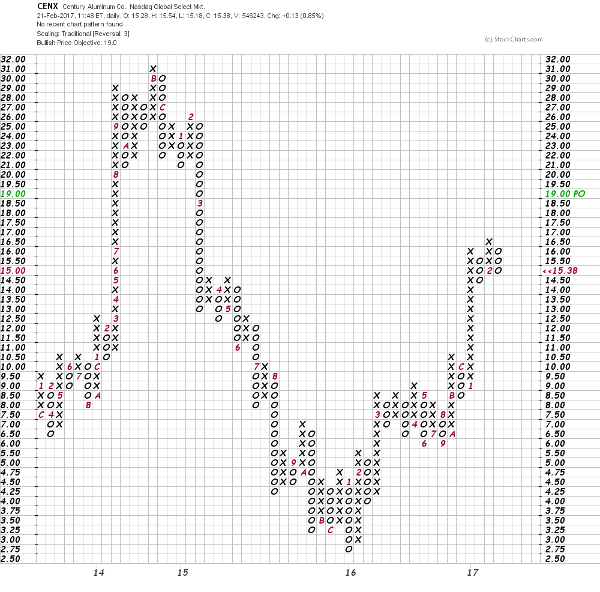 In this Point and Figure chart of CENX, above, we can see the rally the past year and the current consolidation. A trade at $17 would be a breakout and give us a conservative $19 price target.