Netflix Inc. (NFLX)  -- the "N" in the so-called "FAANG" stocks -- has been signing up new subscribers left and right and seems to have the wind at its back, but I recommend caution. Why? Let's check the charts and indicators.

In this daily Japanese candlestick chart of Netflix as of Friday afternoon, we can see that the stock rallied into late January, then corrected to fill part of its January price gap after the company's last earnings release. Prices briefly dipped to around $240 at the right of this chart and closed well off Friday's lows to make a so-called "hammer formation":

Trading volume was heavy for Netflix's upside gap, but has declined from there and hasn't expanded in recent sessions even as the stock's price rallied back towards its January high. The daily On-Balance-Volume line (OBV) did move up with the price action over the past year, but dipped slightly this month. It'll be interesting to see if the OBV line moves to a new high should Netflix's price rally back to record territory.

The bottom panel in the chart above shows 12-day price momentum, which was very strong when NFLX hit its January high, but seems likely to make a lower high on the stock's current move up. Unfortunately, a lower momentum high could foreshadow some further price consolidation for the stock.

In this candlestick chart, we can look at less data to see the patterns better. The hammer low at right is easier to see, as is the confirmation that came the next day:

Friday's candle pattern (which had not closed for the day as I charted this) looked like it could be a "doji" or a "spinning top." Both of these patterns suggest that buyers and sellers were more in balance. That means that the price action on Tuesday might determine the next near-term trend.

Lastly, this Point and Figure chart shows us Netflix's price action without gaps, illustrating the stock's recent consolidation between $240 and $264. A trade up to $288 vs. Netflix's Friday close at $278.52 would be a minor upside breakout and could set the stock on a new trend higher: 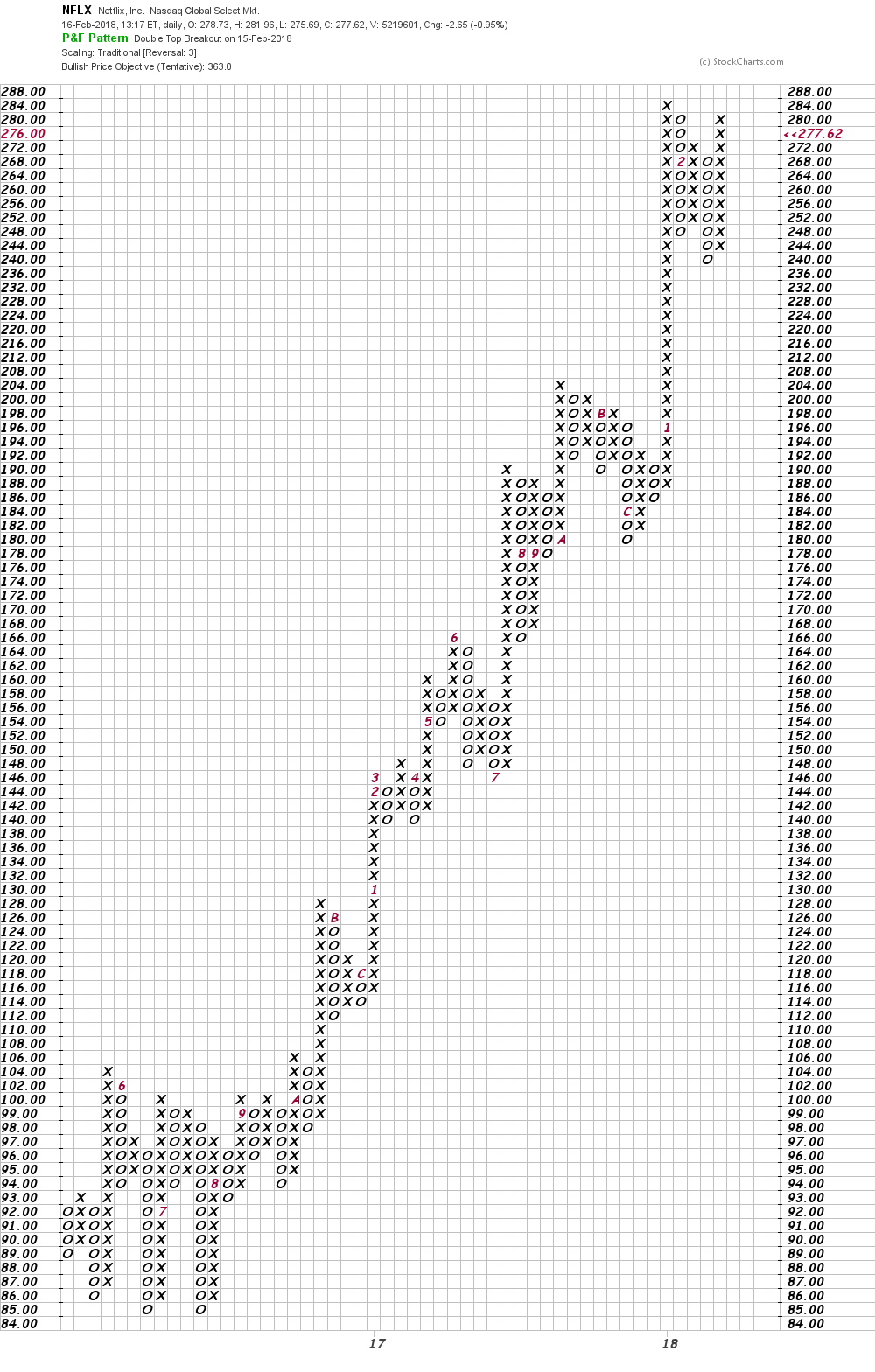 The bottom line -- you might think that NFLX is making a "double-top" formation with peaks around $264, but the pattern isn't large enough in my opinion. Instead, we'll probably see some sort of continuation pattern, with new highs possible in March.

With the bearish divergence from the momentum study, I would rather proceed slowly before entering Netflix on the long side. I'm not outright bearish on the stock, but I think a longer period of sideways price action seems possible.

This column is part of a series of special in-depth reports on the FAANG stocks -- Facebook (FB) , Amazon (AMZN) , Apple (AAPL) , Netflix and Google/Alphabet (GOOG) , (GOOGL) . To check out all of the reports in this series, click here.

Get an email alert each time I write an article for Real Money. Click the "+Follow" next to my byline to this article.
TAGS: Investing | U.S. Equity | Technology | Markets | Risk Management | Stocks

Jim Cramer: The Market Makes No Judgment Calls, Investors Do

And the reality is that the more money you make, the more likely you can contribute to the causes that you care about.