"Perpetual optimism is a force multiplier."

The Running Of The Bull

Five day winning streak. Just last Friday, a few minutes past 1:30 in the afternoon in New York, the S&P 500 curled upward. There had been a few attempts made over the preceding few days, making those of us who do bottom fish at times like that start to wonder if we were getting in a little bit deep. This time the turn was real. US equity markets closed higher that day, and haven't stopped since.

European trading, and US equity index futures now point to a weaker US dollar, and for now at least... that still aligns perfectly with strength in the marketplace. Unless something changes sharply, US stocks will (might) open north of where they closed. As witnessed yesterday morning, and forced by electronic markets that create overshoots in both directions, that has nothing to do with where equities will be by mid-morning. On Thursday alone, we experience both free-fall, as well as a raucous rally.

Oh, there are public portfolios out there. People look at this one, and that one. Last time I reacted to one of these was when I noticed that Berkshire Hathaway (BRK.A) , (BRK.B) had liquidated their position in Action Alerts PLUS holding General Electric (GE) . Big seller out of the way? What does the Oracle know? Time to get in, right? Yeah, your old buddy is still managing that position, might be doing so for some time yet to come. Hey, at least news broke last night that GE was selling part of it's overseas lighting unit. (....and miles to go before I sleep - Frost).

Warren Buffett's Berkshire Hathaway released their 13F statement (a snapshot of the firm's stock portfolio) yesterday. Three big changes become immediately obvious upon first glance at the document. Right at the top, you can see that over the last quarter of 2017, the firm added over 7M shares to their holdings of Apple (AAPL)  (an Action Alerts PLUS holding), bringing Apple's weighting within this portfolio up from 11.6% to 14.6%. Huzzah. AAPL ran more than 3% on the news, though this snapshot is six weeks old. My old 176 price target for the name is back in play. You bet your tail, I'll take more off if we hot that spot, after scraping 150 a week ago. Then, there was the initiation of a small long in Israeli pharmaceutical Teva (TEVA) . Though a tiny weighting within the portfolio, TEVA shares ran 7.7% on the day.

Most disappointing for me, perhaps because I am now long the name, was the apparent evacuation of Berkshire's IBM  (IBM) long. That name dropped from more than 3% of the book to merely a token position. I had recently started to believe Ginni Rometty's "turn around the battleship" story, regarding a modernized approach to the firm's direction. I will not abandon my position, which is still very small just because Warren Buffett has gone the other way, but I would be lying if I did not admit that this does give me pause.

Notice the positive momentum, not the insane parabolic momentum seen late last year,and earlier this year, but the slightly more measured kind being afforded Bitcoin of late? Wonder what's going on there? You may recall Bitcoin trading below $6K as recently as ten days ago. That was on February 6th, the day that the Securities and Exchange Commission, and Commodity Futures Trading Commission held a joint hearing regarding the potential for crypto-currencies... along with the potential for regulating them a bit better.

Yesterday. that same CFTC comes out and warns those in this space that several frauds are prevalent on-line occurring largely in some of the smaller cryptos. Not exactly an "all-clear" for the Bitcoin crowd, but certainly seen by that group as something to feel relieved about.

Bitcoin roared on Thursday to gains of more than 9%, trading well above $10K for the first time in two weeks. The most famous of cryptos is off the pace this morning on some profit taking, though still in a far better place than some expected.. Last sale I see is around $9800 as night evolves into morning.

WTI Crude roared back from the dead yesterday, trading not just above $60 per barrel, but above $61. This glorious move was indeed aided by a softening US dollar. Now, the Energy Sector? That's another story. Among SPDR sector ETF's, the (XLE) (energy) was the only one left in the red yesterday. This can not all be blamed on struggling Natural Gas prices. In fact, since last Friday, while the S&P 500 has screamed to a gain of 5.8%, the XLE has picked up a mere 2.35%. Seems pretty good for a week's work until your realize that this leaves the sector in last place. Year to date, energy is only being under-performed by the bond proxies, and that is for an obvious reason.

What now for the group. We know that expectations for US production are growing off of the charts. We also know that global demand is only going higher as well. China and India are not going anywhere, and as their middle class grows, so will that demand be reinforced.

There is one more thing. Perhaps a big thing. Saudi Aramco. OPEC compliance with their own production discipline is widely believed to be pretty good. It's quite obvious that for the Saudis to go ahead with their plan to bring this state-owned oil giant to market that they will need oil to be stable right where it is. I told you at the beginning of the year that my favorites were tech and energy. Well, tech has been excellent. As markets ran for the exits last week, I told you I was a buyer. I was. I put the emphasis there on the banks, as I felt that they would benefit for sure from volatility, and perhaps from rising inflation. So far, that is a move that I am darned pleased (ecstatic) with. Energy lags.

My thought now, is that my out-performance in these other sectors have bought me enough time to be patient here. As I told you here in the Recon, my game-plan is to play oil services, at least as far as crude is concerned. I'll avoid exploration. Regardless of direction, this rising demand will, in my opinion place a bid under these type names.

Charts Of The Day

Two charts caught my attention this morning. Both of these stocks are in the news this week. One is of a rising star ... Zoetis (ZTS). The other has been a real dog at a time when most stocks were performing well. That would be Campbell's Soup (CPB) . Zoetis reported their Q4 digits yesterday morning. All beats. In fact, they showed revenue growth of more than 14% year over year. Campbell's is expected this morning. Wall Street in general is looking for EPS of $0.82 on revenue that should come in below $2.2B. Campbell's has not beaten quarterly expectations on the revenue side since November of 2014.

Chart Number One: Back on Track (ZTS) 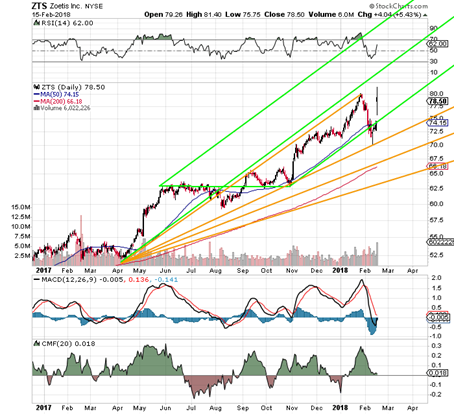 This name that had been a strong performer throughout 2017 ran into trouble ahead of earnings...along with the rest of the broader US equity marketplace. I want you to look at this. See the orange Fibonacci Fan Lines? Not only have these shares rebounded precisely where they should have (38.2% re-tracement off trend), but they did it twice...in late October and early February. Wow. So, we have no doubt. We know where rising support lives, and so do the algos. That's important. Yesterday's rally, while not completely undoing the week prior's sell-off, certainly keeps the name on trend. Now look at how well this name obeys the Andrews' Pitchfork model.

My thought on this, are that ZTS may or may not be a good investment. It looks like it may be. On top of that, if trend is to continue to be respected, and the Pitchfork obeyed...one might just get away with writing 82.50 March 16 calls and 72.50 March 16 puts against the position. This may knock a rough 75 cents off of your average point of entry. If the name runs significantly against you, you will have to buy more shares at 72.50, unless you buy back the put. Then again, you liked the stock above 78.

I like Campbell's Soup. I always have. The soup that is, not the stock. It is easy however to root for this name, an American classic. As you can see, CPB spend most of 2017 in a death spiral until finally broadening out to form a bottom over the past half year. This allows us to apply a pitchfork to the chart.

If earnings surprise today, you can see from the applied blue Fibonacci levels that resistance likely lies in the area of 50.67. The shares have already drawn back from that spot precisely. Should the numbers disappoint, and the shares move lower today, then this "newish" Pitchfork model will be implemented for further pricing anticipation. Your daily MACD is starting to show some life. Money Flow, however remains awful. Today is a big day for this name, potentially a true pivot point if conditions are to improve, or further deteriorate. I am not touching this one until they show me. It's fine if I miss out.