"No one regards what is before his feet; we all gaze at the stars."

Not Again, please. Yes, again. The wounds of social decay infect our nation. Children leave for school, unknowingly their own intrinsic human value diminished by another. A coach lies frozen in time, taken in a moment of pure honor. The lives around him, to him were worth more than his own. Mental illness gone unchecked. Something clearly wrong. This is not the time, nor the place to get political. We do have to inspect ourselves, and each other. We do have to be civil. We do have to at least try to recognize when imbalance, or evil crosses the line into danger.

Prayers for Parkland? Yes, you should pray, if that's what you do. For the families. For the repose of the souls of those lost. We have prayed before. We will, I fear, pray this way again. Perhaps we might also pray for wisdom, the wisdom and energy to understand, and then finally to love each other.

Two weeks ago, a whiff of possible upward pressure on consumer level inflation sent both stocks and bonds into beat-down mode, leaving no place to hide. The nature of exotic volatility-related exchange- traded products led to what amounted to a correction (10% drop from peak pricing) for the equity crowd.

Inflation was again the hot topic yesterday after January CPI printed a bit hotter than expected. There would be no equity beat-down this time, despite exceedingly poor results for January Retail Sales. That performance was made worse by the fact that January Retail Sales showed a decrease in month-over-month terms from a December that was revised dramatically lower than previously thought.

This data, particularly the awful numbers seen in the retail space forced the Atlanta Fed to drag their expectations for Q1 GDP all the way down to 3.2% from an annualized 4.0%. Earlier in the month, this "expectation" had been running above 5%. Perhaps it's time for Atlanta to not make public this number until we are a little further into a quarter, as it's public availability only serves to make the model, and the central bank itself look foolish.

Government debt did get hit on this news. The yield on the U.S. 10-year note spiked above 2.92% in late trading on Wednesday. The yield curve flattened a bit. The spread between the 2-year and the 10-year stands at slightly less than 73 basis points this morning, after spiking to close to 80 last week. Prior to the "flash correction," this spread had been down to roughly 50 basis points. This action has clearly favored the banks, as has the perception of the bankers' adaptability to both inflation and volatility.

Keep in mind that though January CPI printed hotter than expected, there still was no increase in year-over-year inflation. Much ado about nothing? I would not go that far, but overreaction seems to be what markets are good at in this, the "golden age of electronic trading."

So now, increased prospects of rising inflation is good for stocks, after just being a negative. Hmm, I wonder what could have changed. Yeah, maybe this is not about inflation. Not really.

You see, stocks fell sharply all February until last Friday, the ninth. Then stocks started climbing out of their hole. That's really funny, because U.S. dollar valuations as measure by the US dollar index (DXY), climbed sharply from Feb. 1 through Feb. 9, and have been sharply in decline ever since. Hmm. Ever feel like you're not in control of your own destiny?

Don't look now, but the mighty U.S. greenback will buy you nearly four less yen than it could earlier this month. The yen has moved to five-month highs, as the economic community doubts that the Bank of Japan can continue to travel further and further down that often spoken of rabbit hole, as the improving Japanese economy starts to demand a more appropriate approach to monetary policy. Even re-appointing Gov. Haruhiko Kuroda has not softened the advance of the yen, and he sort of makes our central bankers at the Fed all look like policy hawks in comparison.

As we have said in this column, it is dollar valuations that will drive domestic U.S. inflation. Wage growth? Bah!! Let me know when it hits 4% year over year on a corresponding increase in weekly hours. That's when inflation will be consumer driven. Until then, this story is all about deficit spending amid withering revenues, and then topped by corporate tax cuts. What's that? Darned right. Valuations in this environment should indeed be well above historical norms. They still count home runs from the steroid era, right?

It happened after the closing bell last night. Cisco Systems (CSCO) reported their Q2 results. Bang. The firm beat EPS expectations by four cents. Bang. The firm beat revenue projections by $70 million. Bang. This firm returned to year-over-year revenue growth -- for the first time since Q2 2016. Rock on. Gang, that's not the best of it.

Cisco had news for shareholders. The company was boosting its quarterly dividend to $0.33 from $0.29, a 14% increase. Want more? The firm increased its stock repurchase program $31 billion from $6 billion. This stock buyback comes with no expiration date. Huzzah. The company expects this plan to play out over two years.

I have saved the best part for last. Do you realize how Cisco intends to pay for this buyback, and this increased shareholder payout? Repatriation. Another victory for the tax plan. Cisco plans to bring home $67 billion. That's with a "B." The firm plans to take an $11.1 billion tax-related charge. mostly for the U.S. transition tax, a bit for foreign withholding.

The Colonel had a good feeling about this one. He's been writing puts in this name since last week. Told me to get ahead of it. I was too busy. Still not as sharp as the old man. Sharp as a tack, that guy is. The stock took off overnight, and at zero-dark thirty is trading at $45.22, up more than 7% from last night's close, which in turn represented a 2% gain from the night prior.

Let's take a look at the chart. kids.

Chart of The Day: Cisco (CSCO) 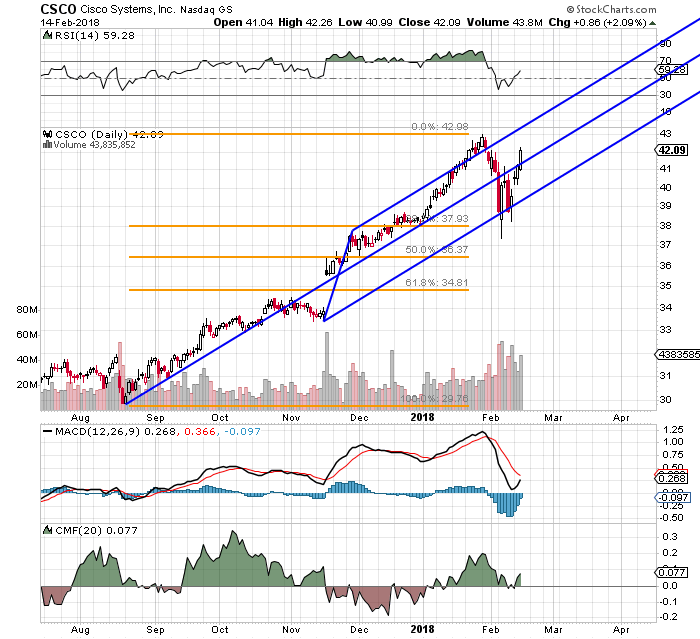 Actually, even prior to this morning's open changes to this chart, the chart was beginning to look solid. For short-term indicators, you can see Money Flow surviving a significant test during the "flash correction." You can also see that Relative Strength waned, but never fell to levels considered to be technically oversold.

The daily Moving Average Convergence Divergence (MACD) at first glance suffered a bearish crossover at the end of January. Upon a second look, one notices that both the 12- and 26-day exponential moving averages (EMAs) never crossed into negative territory, and now that 12-day EMA moves with urgency toward a bullish crossover. That will likely happen at 09:30 ET this morning.

To the medium to longer term models, the name obeyed the 38.2% retracement level if you ignore the lower wicks of the candle sticks. Is that taking liberty? Yes, but take a look at the Pitchfork. This name plays around the edges, often piercing levels, but not actually breaking them. The Pitchfork works quite well if you again lance off those same two wicks.

Yesterday, the share price moved back above the central trend line. This morning, the name will likely open well above the upper trend line. At some point this morning, that line will be tested from above. The performance of CSCO upon that test will be significant in determining price targets for the stock.

Given all of the positive news from a fundamental perspective in Cisco, I would think that $45 support could be good into March.