We took a look at Baidu ADRs (BIDU)  in June after a downgrade by TheStreet's Quant Ratings service , and wrote, "BIDU looks weak overall and further downside probes are possible in the near-term. Traders should avoid the long side of BIDU for now. A close below $174 is likely to precipitate further price weakness."

That analysis totally missed the mark. BIDU only traded sideways for a week and then launched at rally from $180 to over $270 by the middle of October. In a word -- embarrassing. How do the charts and indicators look now?

In this daily bar chart of BIDU, below, we can see that the price of BIDU corrected from October to December and then made a rally to a lower high in January. BIDU finished January with a gap to the downside and a $40 decline. BIDU broke the rising 200-day moving average line but has popped back above it. Prices are now testing the flat 50-day moving average line.

Since the October peak the daily On-Balance-Volume (OBV) line has followed prices lower and slightly higher. The recent rise in the OBV line is encouraging for the bull case but a rise above the October high would be a stronger message. In the bottom panel is the 12-day momentum study, which does not show a bullish divergence.

In this weekly bar chart of BIDU, below, we used a "log" scale to handle the big price swing over the past three years. Prices broke the rising 40-week moving average line and have rallied back above it. The weekly OBV line has confirmed the rally in price but the line has turned neutral the past three months. The weekly Moving Average Convergence Divergence (MACD) oscillator has been in a bearish mode since December and is still pointed down.

In this Point and Figure chart of BIDU, below, we have bullish and bearish clues. There is a longer-term upside price target of $311 shown but we can also see chart resistance in the $250-$274 area. 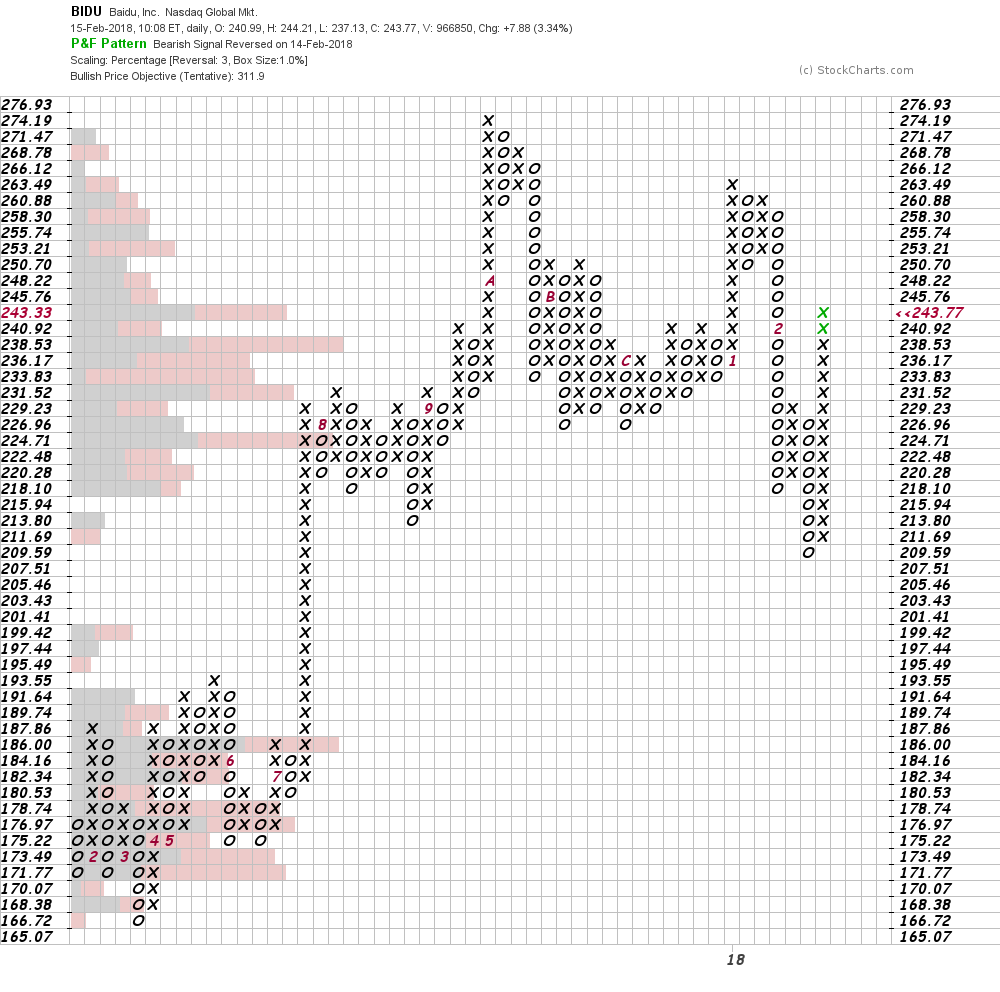 Bottom line: The lower high in January and the break of the November/December lows and the 200-day line does not instill confidence. Going long BIDU at current levels would require, in my opinion, a stop below $215 and that is more than I would be comfortable with right now. I would wait for BIDU to dip and make a higher low than the recent approx. $210 low.

Get an email alert each time I write an article for Real Money. Click the "+Follow" next to my byline to this article.
TAGS: Investing | U.S. Equity | Technology | China | Markets