Anyone else find it interesting that Warren Buffett continues to hold the line on Berkshire's stake in his preferred drink of choice, Coca-Cola (KO) ?

Sure, Buffett nearly quadrupling its stake in Action Alerts PLUS charity portfolio holding Apple (AAPL) and increasing its position seven-fold in the four biggest U.S. airlines certainly creates more buzz. But, at least from an outsider's perspective, there are at least two reasons why Buffett should have nibbled at Coca-Cola last year, instead of keeping his stake at roughly 400 million shares, or 9.27% of Coke's outstanding shares (Berkshire is Coke's biggest shareholder).

For starters, Coke's stock has under-performed the S&P 500 over the last year, falling 6.3% compared to the broader index's 22% advance. The Dow Jones Industrial Average has raced about 27%. Buffett is always keen on getting the most bang for his investment buck, and on paper it would seem the opportunity to buy a Coke that is out of favor with the seemingly dumb Wall Street would be a cool idea. That is especially the case in light of the second factor.

Coca-Cola is targeting a $3 billion cost-savings goal by 2019, helped by the re-franchising of bottling operations by the end of 2017 and zero-based budgeting efforts. With a less capital-intensive Coke, that should free the company up to pay even higher dividends and boost earnings through stock repurchases. How couldn't those things pump up the often-caffeinated Buffett?

There are two things that may be happening here with respect to Buffett and Coke. First, Buffett is clearly throwing more trust in the direction of deputies Todd Combs and Ted Weschler. These guys apparently are OK with wading into the tech space, most notably against the backdrop of a Nasdaq Composite touching new highs each day (the anti-Warren Buffett investing playbook here). Therefore, more capital allocated on names with more buzz, such as Apple and Sirius XM Holdings (SIRI) , less of a need to own even more of a slow growth soda company. To be sure, this emerging new school at Berkshire calls into question how wedded to Coke Combs and Weschler will be post Buffett.

Secondarily, Buffett may not think the relative under-performance of Coke's stock the past year indicates a screaming bargain.

While Coke's volume sales in North America, the company's largest market, grew 1% year over year in the fourth quarter, global volume sales fell 1% due to high levels of inflation in some Latin American countries.

The soda giant's restructuring plan continued to put pressure on the company's top line, resulting in a 55% drop in fourth-quarter earnings. It took a charge of $919 million relating to the re-franchising of some of its bottling operations in North America. As a result, Coca-Cola reported net income of $550 million, or $0.37 a share on an adjusted basis, on revenue of $9.41 billion. In the year ago period, the company earned $1.24 billion on revenue of $10 billion.

Analysts on average were expecting the company to report earnings of $0.36 a share on sales of $9.1 billion.

With the top and bottom lines sluggish, Buffett could be hesitant to rubberstamp (by adding more Coke shares) that the performance is OK, especially in front of new CEO in James Quincey taking over later this year ("I know James and like him, and believe the company has made a smart investment in its future with his selection," Buffett said when Quincey was appointed as successor to Muhtar Kent in December). Buffett probably wants to see what Quincey could deliver before buying more of the company; can't blame him for that.

But hey, wow, Warren Buffett owning about $7.74 billion of Apple. Who would have thought. Guess the Oracle of Omaha is patiently waiting for Apple to repatriate half of its $250 billion in foreign-held cash under a Trump tax holiday and do one hell of a special dividend. Now, that is the opportunistic Buffett we have all come to know and love.

Cool Reads from Around the Web

Amazon continues to penetrate our lives, and that sucks for other retailers: From robust sales of digital assistant Echo to Amazon Prime subscriptions, Growth Seeker portfolio name Amazon (AMZN) continues to make deeper inroads into our lives. The latest example of this comes via the tablet space. Amazon posted strong 99.4% annual growth in its tablet shipments for 2016, totaling 11 million units, claims a report by research firm TrendForce. Overall, global tablet shipments fell by 6.6%. Amazon's growth put it in third place for top tablet brands at a 7% market share, behind Apple (27%) and Samsung (17.2%).

The movie theater as you know it will be dead in under 10 years: IMAX (IMAX) opened its IMAX VR center in Los Angeles on Tuesday, reported Variety. The center consists of a large room with 14 different pods, each containing a different VR experience. It's conceivable that VR makes it completely unnecessary for an IMAX and other theater operators to invest gobs of capital in movie screens, sound systems and the expansive movie theater settings we have all grown up on.

Here comes inflation: Get ready to pay more for your yogurt and bowl of morning cereal. Danone, the world's largest yogurt maker, warned Wednesday that it expects a "steep rise" in milk prices this year. The company, which makes Activia and Actimel yogurts, said the increase would dent profits, but did not say if it would be forced to raise prices. Milk prices have surged about 10% since bottoming in early October last year. 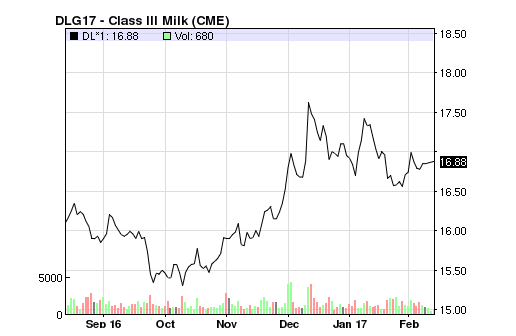 Get an email alert each time I write an article for Real Money. Click the "+Follow" next to my byline to this article.
TAGS: Investing | U.S. Equity | Consumer Staples | Consumer Discretionary | Markets | Hedge Funds | Stocks | Consumer | How-to