"A flower cannot blossom without sunshine, and man cannot live without love."

Ever see a nice bump in disposable income? Maybe it was a performance bonus. Maybe you simply sold a home for more than you ever imagined. Remember trying to surprise the spouse with the good news, especially before cell phones were invented, by picking up something that the day before you might not have thought yourself able to afford, just to see them smile? That my friends is in economic terms, known as "the Wealth Effect."

The Wealth Effect is what former Fed Chair Ben Bernanke, and his successor Janet Yellen aimed for with their quantitative easing program that was launched at a time when the U.S. economy was still wrestling with the possibility of a second great depression. Some would say that the inevitable has only been delayed. Others, that the extreme policy worked as planned in all ways, with the obvious exception of a Philips Curve that has failed to produce a ramp in consumer-level inflation.

We'll see more information on that inflation at 08:30 ET this morning. At that time, the Bureau of Labor Statistics will release its data for January CPI. Consensus is that the rate of consumer inflation slowed in January to 2.0% at the headline (from 2.1%), and to 1.7% at the core (from 1.8%).

We remain two weeks away from the January PCE data. That is the item released by the Bureau of Economic Analysis, and at least under Yellen's leadership was more closely watched than CPI by those at the central bank.

The New York Fed announced yesterday that U.S. household debt had grown to $13.15 trillion as of the end of 2017. This would make the year the fifth in a row to show a record in unadjusted dollar terms.

You've seen the overall growth in revolving credit over the second half of the year. Once seen as a weakness, that families were struggling to maintain a standard of living, now the series is often viewed as a strength, as in the U.S. consumer is feeling confident enough to borrow.

Credit card debt is flat. Not a real problem there. Oddly, at least in my opinion, is that rising delinquency rates are seen in non-revolving type debt.

The delinquency problems that do currently exist come from auto loans (rising), and student debt (seemingly always high). Overall, though, dark skies have been kept at bay for the time being by a stock market that had until very recently been hot as heck, and by rising real-estate prices that have been supported as much by scarcity as demand. That's the effect that Chair Bernanke was going for, the risk taking that the FOMC at the time, tried to provoke.

Are we out of the woods after the "Volatility Correction of February 2018"? My thought is that once again, we have entered a new normal. We are getting good at that. Fundamentally, the economy is humming along nicely, but is it sound?

A House of Cards

Maybe you heard Yale economist Stephen Roach on CNBC yesterday. Maybe you didn't. Not the usual academic drivel. The man made sense, and seemed quite sentient.

"Given this deficit spending, our savings rate is going to zero adjusted for inflation, and that's going to push us into a realm of wider current account and trade deficits." Roach referred to current economic fundamentals as "extremely fragile," and called the U.S. economy "an accident waiting to happen."

Think Roach is crazy? I don't. The recently signed-into-law corporate tax cuts will, in my opinion, keep the economy on track for at least the short to medium term. Earnings growth is the hottest it's been in six years, and this quarter's data does not include any results based on those tax cuts. Just projections and commentary.

No, for a couple of years, I think the economy shall wipe from our memory the words spoken by Stephen Roach. Then, one day down the road, after a few years of this significant increase in deficit spending at the federal level, compounded by Ben Bernanke's risk taking at the personal level, we may be forced to recall Roach's warning's in the most violent of ways.

Roach warns that the U.S. savings rate has dropped to about one-third of where it was in the latter stages of the 20th century. Is increased deficit spending the way out of bad spot that has been many decades in the making? Maybe all of this deficit spending is a simply a hopeful long pass at the end of a football game meant to simply push the game into overtime -- thus, putting off the inevitable. 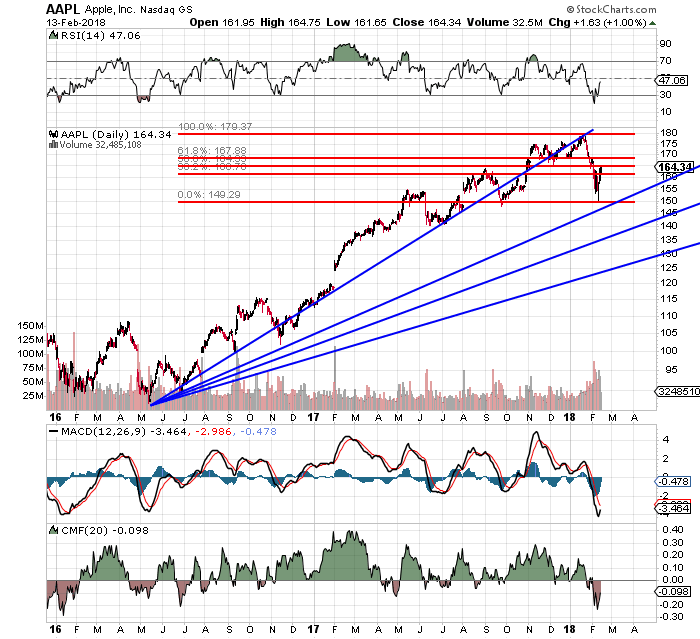 I am not going to dress this up. I am long Apple (AAPL) . I had a $176 price target on the name. When it got there, I sold half of my long, and placed a $197 target on the balance. I felt very smart. I had played the name like Stradivarius, had I not? Just one thing. AAPL itself did not obey my plan.

Instead of spiking onward to glory, the news cycle changed for Apple. Stories of intentional iPhone slowdowns as new products were released ended up being... maybe explainable, but that news had not been widely disseminated to the public customer. Snide remarks were made here and there. You heard them, as had I.

Then the super-cycle appeared to be less than super. Still Herculean, by any other consumer electronics company's standards, but not the five-run home run that some had hoped for. The name sold off hard as the equity markets overall sold off hard.

Oh, by the way, CEO Tim Cook downplayed the idea of a special dividend at Tuesday's annual shareholder meeting. That could be a small negative for the fast money folks.

I added to many long positions last week at what seemed like discount prices. For the most part, these purchases allowed me to post short-term profits in a portfolio whose core positions were taking a nasty punch in the nose. AAPL was among the names I bid for last week. My bid ($148) in AAPL was never hit. The stock bottomed at $150, and now stands above $164.

So, now what? Let's take a look. The balance of my position is still nicely green. The $148 purchase would have beefed up the investment, but not significantly altered the average basis cost.

There are still some nasties lurking on this chart. Money Flow appears to be no short-term friend. The daily Moving Average Convergence Divergence (MACD) is grotesque, although the 12 day exponential moving average (EMA) has started to curl upward toward the 26 day EMA. A cross-over of those two lines would be helpful.

Relative Strength, after bouncing off of technically oversold levels is at least, starting to show some life.

The blue fan lines illustrate to me that the depth of support did indeed show itself just above a 31.8% re-tracement of the entire move from May 2016. It also did reassure me that the bid I made was at least founded with some kind of market-based reasoning that allows me to pretend to myself to be less of a fool.

So, I think we know where short-term support lives. How about resistance? No longer an acceptable target is $197, unless you are more the long-horizon type and less the impulsive trader type.

Using a simple Fibonacci model that starts with the stock's recent fall from grace, first line resistance should appear right where it has, at a 50% re-tracement of this move. There looks to be more traffic in the $167.50 area before any attempt can be made at re-testing the old highs. For those looking to get out, that is where there may be a fight.

For those, who like me missed that bottom, but would still like to reduce their net basis cost, as of last night's close you could still write March 16 AAPL 150 puts for $0.90. That'd pay for a nice St. Patrick's Day feast.

Get an email alert each time I write an article for Real Money. Click the "+Follow" next to my byline to this article.
TAGS: Investing | U.S. Equity | Financial Services | Futures | Economic Data | Markets | Economy | How-to | Newsletter | Stocks | Options