Don't let Wall Street blow smoke up your rear-end when it comes to investing in retail.

While nursing the flu the past two days, I had to contain myself from taking to Twitter to rip people a new one for their creeping bullishness on retail. First was the Morgan Stanley upgrade to a lame, indecisive "equal weight" on department store J.C. Penney (JCP) . Although the note was far from convincing -- meaning don't empty your kid's college fund and pour it into stodgy J.C. Penney -- Wall Street took it as an all-clear sign on retail. That somehow the sector, which has been battered over the past year due to the fundamental shift to online shopping and mixed consumed spending, was a screaming oversold buy.

Then there was the slick headline on Macy's (M) in Barron's that was no doubt designed to get everyone talking on Monday about a company that could be owned by a Canadian company with its own problems inside a year. Hey, you write a headline saying a stock could rise 50% and it's going to get people excited in the broader sector, too.

It's no small coincidence that these types of calls -- which come as folks try to be heroes before looming retail earnings reports this month -- arrive as the S&P 500 Retail Index has been outperforming the broader S&P 500 year to date. Investors are badly looking for undervalued sectors in this overheated stock market, and you would be surprised how quickly they forget about retailers being a horrible investment the last two years and buy into the new hype. 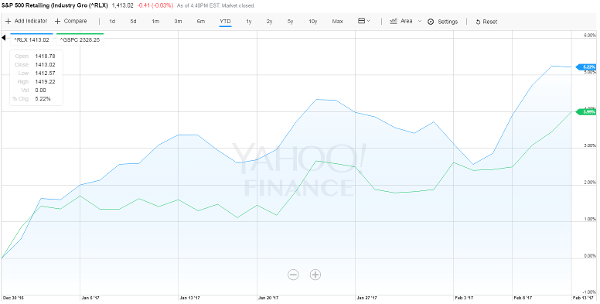 The S&P 500 Retail Index has risen more than 5% this year. Source: Yahoo! Finance

Sprinkle in Apple (AAPL)  shares at an all-time high on the belief that the iPhone 8 will be epic, in effect driving scores of traffic to malls and Best Buy (BBY) later this year, and it's easy to see why the retail trade just feels like it wants to come back to life.

Unfortunately, if you think retail is a can't miss place to make money short-term and even long-term, then this writer has a flying chicken that churns out 50 pound golden eggs for sale. It will only cost you a $1, so get the emails flowing. The reality is that retail remains one of the worst places to park your money.

If you truly believe a company like Macy's is going to get bought and have some play money free to take a gamble, then by all means, let'er rip. But closing out a position in, let's say, a solid dividend-payer with good growth prospects such as PepsiCo (PEP) , to dump it all into J.C. Penney is a fool's game. Heed this advice: you will get your face ripped off.

Lost in the sauce on the J.C. Penney upgrade were these nuggets from the Morgan Stanley analyst on why retail basically still stinks.

And for those unsure of where all this uber bearishness on retail is coming from this morning, here is a tidy list of other concerns:

Want one more for good measure? If Starbucks (SBUX) is struggling with the shift to digital shopping -- its stores are in malls and on street corners -- what makes shares of a sub-par retailer such as Kohl's (KSS) a screaming buy? Does that make any sense? Nope. And it's something all of the new retail bulls will be reminded of once they get shocked with some absolutely awful earnings reports and outlooks shortly.

Jim Cramer and the AAP team hold a position in Apple, Starbucks, PepsiCo and TJX Companies for their Action Alerts PLUS Charitable Trust Portfolio. Want to be alerted before Cramer buys or sells AAPL, SBUX, PEP and TJX? Learn more now.

Cool Reads from Around the Web

It's a dam problem: Think California's Oroville dam is the only problem child in the country? Think again. The average age of the United States' 84,000 dams is 52, according to a report from the American Society of Civil Engineers. In seven states, more than half of the most at risk dams are operating without emergency action plans, points out the National Inventory of Dams. This data was nicely featured by USA Today.

You have never seen one of these: Someone is selling a 1979 four-door Corvette on EBay for $65,000, reported CarScoops. The car, which has over 55,000 miles, is actually one of six built by a custom shop. This may actually be a good investment: the ad also notes that five years ago, a similar car sold for about $500,000.

The movies are the Valentine's Day hotspot: Movie theaters see a 255% lift in foot traffic on Valentine's Day compared to the week before, location check-in service Foursquare says.

Get an email alert each time I write an article for Real Money. Click the "+Follow" next to my byline to this article.
TAGS: Investing | U.S. Equity | Consumer Staples | Consumer Discretionary | Consumer | E-Commerce