Only those who will risk going too far can possibly find out how far one can go.

The alarm goes off. My back hurts. The voice on the radio has already told me that equity-index performance has been sloppy across Asia and Europe. Dow futures are trading in the hole, as are their S&P siblings.

To be sure, there are far worse things than waking up on a cold February morning with the markets skating on thin ice. First among them would be not waking up at all. For one more opportunity at greatness, one more chance to test our mettle against the machines, we pause. We are grateful for the honor.

Many will allow their intellect to become lazy as they age. Many will complain about circumstance. Not us. We will meet obstacle with saber in hand. We will feel the sting of defeat, and grow from the experience. We will never stop challenging ourselves. We will never, ever surrender. We're always willing to take that extra step. Always faithful.

President Trump laid out his ideas Monday for a 2019 budget, as well as a complex plan for rebuilding the nation's crumbling infrastructure. Stocks reacted well in general, and infrastructure-type stocks reacted particularly well.

It was almost as if these plans were either realistic or that their chances of actually being implemented were realistic. I guess no one can blame Trump for dreaming, but the two-year budget that Congress agreed to last week (and that the president signed into law) does count for something.

By contrast, the 2019 budget outline that Trump released Monday is simply a non-binding document that outlines his administration's priorities. Nothing more.

Of course, the budget that Congress agreed to clearly illustrates that our elected representatives have in aggregate largely given up on any thoughts of austerity. But the president's plan uses rosier data regarding economic growth, inflation and borrowing costs at the federal level than the Federal Reserve has forecast. I think that's worth pointing out.

The president's plan would make cuts to entitlement programs such as food stamps, welfare, disability payments and student loans. (Obviously, nobody looking to win re-election will ever touch Medicare or Social Security.)

Hence the problem: Painful cuts need to be made eventually, although the U.S. government has become comfortable with increased deficit spending. This isn't a partisan issue at this point. Those horses left the barn a long time ago.

At some point, the system and the fiat currency will lose confidence in Uncle Sam. When? Only a fool could guess.

Until then, keep on keeping on. Keep learning. Keep adapting. There's a reset button somewhere deep inside that rabbit hole. The day they smack that button won't be a good one.

Bridges and Tunnels and Roads, Oh My!

Did you hear the one about Congress being asked to find another $20 billion worth of deficit spending per year for 10 years for improvements to be made to the infrastructure of our great land? Not only that, this investment will provoke more than $1 trillion worth of investment in this project at the state and local levels. Ha!

Spin the wheel, maybe you'll win a prize. Sorry! Maybe try again next year -- there are nice door prizes for each contestant on their way out.

We also got an extra 200 or so points that the Dow industrials tacked on on Monday after Trump's infrastructure plan started leaking out. Hmm, it looks like the forces that be will try to put them back where they came from on Tuesday morning (or find another reason for the Dow to hang onto them).

Honestly, any plan that would further increase our already-runaway deficit spending (or that depends on local governments to do the heavy lifting) will likely fail at the legislative level, either in Washington or at the state capitols. But on the bright side, I hear that pitchers and catchers are reporting to spring training this week!

The U.S. Air Force is about to modernize and grow. As part of the proposed 2019 budget, the Air Force has requested 77 F-35 stealth multirole fighters from Lockheed Martin  (LMT) . The U.S. Navy has also made request for 24 F/A-18 Super Hornet combat airplanes from Boeing (BA) , and there will be likely also be orders for 15 Boeing KC-46 tanker planes. All of these goodies come to nearly $16 billion, two-thirds of which will be earmarked for the F-35s.

Performance across the sector since Trump took over has been pronounced. Forward-looking plans also allow for an increase in troop levels, as well as an across-the-ranks 2.6% pay raise. I think the term for all of this is "politically safe."

But interestingly, the military is also making some cost-saving moves. For example, the Air Force is reportedly dropping a $7 billion upgrade to its JSTARS system. JSTARS, or the "Joint Surveillance Target Attack System," is basically a large aircraft that's loaded with radar to oversee an operations theater. The brass has been critical of this costly program, claiming it doesn't meet combat-commander requirements.

Another cost-cutting proposal in the president's 2019 budget is a decision to phase out the B-1 from Rockwell Collins (COL) and B-2 from Northrop Grumman (NOC) in favor of modernizing and maintaining the established fleet of B-52 Stratofortresses. The B-52 was first introduced in 1955 and its service life has been truly incredible. This Cold War relic is far cheaper to maintain and remains mission capable in the modern era.

The youngest B-52 rolled off of the assembly line in 1962, but 58 of the 744 that were ever deployed remain active. Fifteen more are ready to go on short notice, and the Air Force only expects to retire the B-52 in 2045. Incredible. Northrop is scheduled to begin delivering the B-21, its next-generation strategic bomber, some time in the mid-2020s.

U.S. oil production moved above 10 million barrels per day back in November, and we all know that West Texas Intermediate sold off hard last week -- $60 support quickly became $60 resistance.

The Organization of Petroleum Exporting Countries acknowledged increased U.S. shale production in a report Monday, but chose to focus on rising demand based on synchronized global economic growth. But on Tuesday, the International Energy Agency (IEA) made plain its expectation that non-OPEC production will run ahead faster than increased demand over the next year.

U.S. production increased by an astounding 1.3 million barrels per day in January. At that growth pace, America is expected to surpass Saudi Arabia in the near future to become the world's second-largest oil producer (trailing only Russia). There's even talk of challenging Russia for the top spot.

From the IEA's statement: "Having cut costs dramatically, U.S. producers are enjoying a second wave of growth so extraordinary that in 2018, their increase in liquids production could equal global demand growth."

What this means is that at oil's current levels, the U.S. shale crowd is making money and getting aggressive. Perhaps America will even end up as a net oil exporter -- not just energy independent, but "energy dominant" (as the current administration has intimated).

Given this expansion of business and a possible bubble-like top that we've seen for oil, I'm uncomfortable holding a sizable long of exploration-and-production companies. Yes, I'm long Exxon Mobil (XOM) , but only via a small stake I picked up on the cheap last week because the name is (or was) oversold. I'm also long Apache Energy (APA) , but that's a name I trade rather than hold for the long term. I almost always have a position in APA, and it's not a pure oil play anyway.

Honestly, I think oil services is where it'll be at in 2018 for the energy crew. I already hold Schlumberger (SLB) , which I consider the industry's elite name and about as well managed as a firm can be. I just fear that maybe SLB's U.S. business isn't as strong as it could be.

Schlumberger is very strong globally, but if America is where the action is, then perhaps I should get my tail into Halliburton (HAL) as well. That's a strong U.S. business for sure.

Charts Of The Day: Schlumberger vs. Haliburton

Let's take a look at these two oil giants' charts. 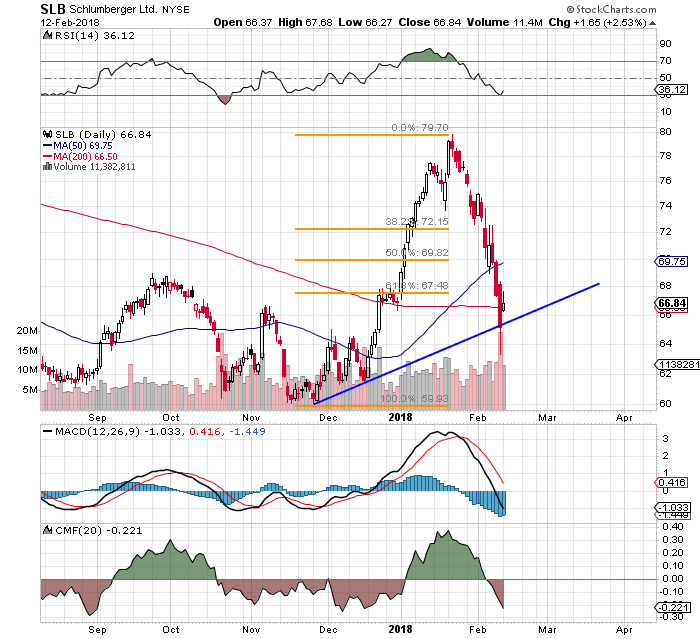 You can see that a positive spike after the "golden cross" in mid-January that quickly evaporated. But there's still at least one positive -- some high volume seen during Friday's bottoming and rebound.

However, I don't like Schlumberger's performance vs. the stock's Fibonacci levels at all. The severity of SLB's February breakdown took the name well below all but the 100% retracement level.

Does this mean that we'll eventually see a retest of the stock's late Autumn lows? Possibly. But I'm more concerned that stiff resistance might reside between $68 and $68.50.

I won't be getting completely out of SLB any time soon, but I might use any short-term strength to spread the risk across both Schlumberger and Halliburton.

Speaking of HAL, let's look at its chart: 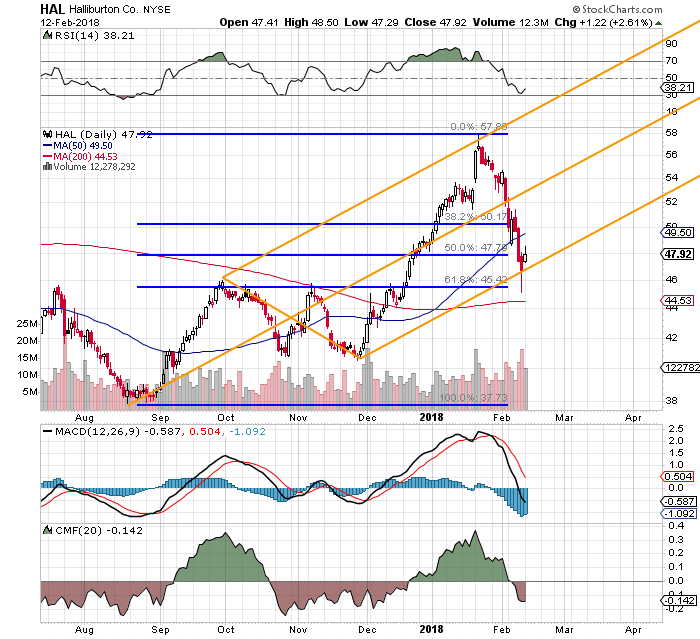 This is a much nicer, more highly organized chart, although the same weaknesses prevail across the combined realm of the Relative Strength Index, Chaikin Money Flow and the daily MACD.

However, when I go to my Fibonacci and Pitchfork models, an obvious pattern appears. With the exception of one bottom wick off of Friday's candlestick, the name still has a chance to respect its 61.8% retracement level.

I know, that's taking some liberty. That said, taking the same liberty allows this stock to remain in obedience to its own Pitchfork model. Meaningful? Perhaps.

Do I indeed spread the wealth between the two? I think so, especially while the name is down. If unpierced, the Pitchfork gives Halliburton support at $52.25 into the spring.