We often associate euphoria with excitement, jubilation, and excessive risk taking. Things like people slapping each other on the back in public, complimenting one another and themselves for their genius when discussing their recent stock trades. Vows to never allow a repeat of the torture and mental anguish suffered last time around. Corrections and crashes of years prior, a distant memory. Arrogance, even.

It was almost exactly a year ago, here, that I discussed sentiment readings on the other side of the spectrum as possible reasons to feel optimistic. Despite the relatively severe correction we were enduring, and extremes in bearish headlines and sentiment, patience and even bullishness were most appropriate. At the time, the S&P 500 was at 1850. We closed above 2300 Friday. Everything is always more clear in hindsight.

I don't know that we are due for a massive correction or that all the gains over the past year are about to be eroded, but things feel very different to me today. Headlines a year ago warned on the potential insolvency of U.S. energy firms (and therefore the entire high yield bond asset class) due to historically low oil prices, Chinese currency weakness and capital outflows, and a U.S. dollar whose strength was choking domestic companies' profit margins and growth. The stock market correction was being pointed to as a harbinger of imminent recession and the 10-year Treasury was all the way down at 1.70%.

We aren't reading about the concerns listed above in today's headlines, but how many of these issues have truly been resolved?

Yes, oil has doubled (to $52) from where it was a year ago -- that puts the cost of a barrel just below half of its 2014 level. There are companies here in the U.S. that can survive with oil in the $50s, yes, but few who can thrive/grow. And there are only three OPEC nations that can meet their fiscal budgets with oil at its current price. The economy of Venezuela, which had a GDP north of $500 billion in 2015, suffered an 18% contraction and 800% inflation last year because of low oil prices. The country is dealing with food shortages and is, literally, on the verge of bankruptcy.

The Chinese yuan has continued to depreciate further against the U.S. dollar, which remains stubbornly strong against all its major peers. And interest rates -- the downward manipulation of which certainly contributed to gains over the past eight years -- appear to have carved out a bottom and are beginning to march higher, albeit slowly. The 10-year Treasury yield, now at about 2.40%, is 40% higher than it was 12 months ago -- this has a meaningful impact on borrowing costs (think mortgage payments).

What if the type of euphoria we are seeing today is not of the back-slapping variety, but of just plain old complacency? Think about what the market has shrugged off in the past nine months -- Brexit, the surprise election of Donald Trump, still-too-low oil prices, a weakening Chinese currency (and strong USD), an enormous amount of geopolitical risk, and a Fed that is finally looking to "raise rates."

The market hasn't been bothered enough by any of this to even pause on its post-election run to all-time highs. The result of all this shrugging off is a degree of complacency in the market we have seen only a handful of times in the last decade, as evidenced by the Investors Intelligence Sentiment reading below: 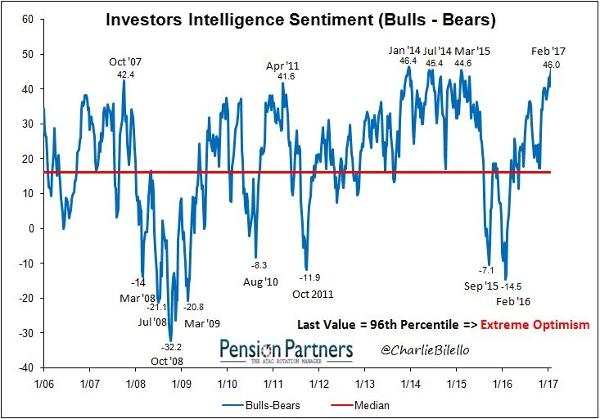 Optimism may be running ahead of fundamentals. Today's market is pricing in the benefits of corporate tax reform and a multi-trillion-dollar repatriation, a large infrastructure spending bill, an across-the-board loosening of business regulation, a doubling of GDP growth (from 2% to 4%), and casually ignoring any economic costs for the aforementioned. Also being priced in is geopolitical stability -- this makes the least sense to me, given the trajectory of stability in the last three months. And yet, here we are at record highs. No worries...

Historically, it's a really bad time to be buying stocks when investor sentiment is skewed so far in favor of optimism. Again, this does not necessarily portend a crash, or even a correction -- what it does suggest, though, is a period of low forward returns for buyers at today's prices. I'm not really interested in taking equity risk for low forward returns. Forward returns for the S&P 500 are barely positive 12 months out when sentiment is above the 94th percentile (of Bulls - Bears). We are in the 96th percentile now.

The S&P is up about 3.5% year to date, but despite the exuberance investors are feeling, I believe better opportunities exist elsewhere. There are plenty of places to invest that are not as expensive, some of which are even doing better than the S&P already in 2017. Emerging market stocks, as illustrated by the iShares MSCI Emerging Markets Indx ETF (EEM) , by comparison, are up 9% through Friday. And EM bonds -- iShares JPMorgan USD Emer Mkt Bnd Fd ETF (EMB) -- are up 3% in the first six weeks of the year, compared to just +0.56% for the U.S. Aggregate Bond Index. Master Limited Partnerships, or MLPs, are up over 7%. Gold is up 7% and the Market Vectors Gold Miners ETF (GDX) is up over 20%.

The U.S. Dollar Index DXY is down (-1.63%) in 2017 at this point, and any continuation of that weakness will benefit commodities (and gold), emerging markets (whose economies and currencies are often tied to commodities), and un-hedged European stocks (not USD-adjusted). From a technical standpoint, emerging markets and gold have just started breaking out. And the un-hedged European index fund, Vanguard FTSE Europe ETF (VGK) , which is just about even with the S&P 500 year to date, is threatening to break above its 200-week moving average.

The S&P 500 closed Friday at the largest distance from its 200-day moving average we've seen in over a year. The U.S. isn't the only game in town, regardless of what you may be reading. After nearly a decade of the U.S. outperforming everything else, it may be time to diversify again.

* Thanks to @CharlieBilello for the charts above.

With the Jobs Report on Tap, 3 Other Issues Are Equally Important for Investors

Here's what to expect in Friday's numbers, as well as my single biggest concern right now.

Target Date Funds: What Some Investors May Be Shocked to Find Out

There's an issue affecting these popular funds that many may not be aware of.

This year's Jackson Hole symposium buys Powell and crew time to figure out how they want to position themselves moving into the latter part of 2022.

Monday's trading action reminded me of a quiet bus ride into the mayhem.