When I was standing shoulder to shoulder with all those other oil day traders on the floor of the NYMEX, once in a while I'd get a very funny feeling. All of a sudden, I'd realize that the position I'd built up for myself was largely shared by just about everyone around the ring -- and I also sensed that every other trader had had the exact same realization.

That'd be a wary moment -- staring around at each other like combatants in an old West quick draw. We'd all still be convinced in our positions, of course. We, collectively, could be entirely right on the coming trend and just need some patience to all make some money. But we also knew that the first guy to flinch in panic could set off a complete avalanche of traders suddenly becoming less convinced and trying to get out.

I called this "the porthole effect": The boat might or might not be sinking, and you couldn't tell through the small hole that was available to you. But if one guy jumped into the porthole trying to escape, he was likely to cause a mob scene of panicked passengers all fighting to squeeze out of that too small exit.

This is kind of what I'm seeing in the oil market today. There's a lot to like -- OPEC coming through with production limits, everyone seeing speedy rebalancing, even the most conservative reckoners and quality reports coming from dedicated U.S. producers, particularly in the Permian basin.

And yet, everyone speculating on the price of oil, just like when I was standing in the pit, seem to be all in one direction -- LONG -- and staring at each other just as we did, wondering who, if anyone, would flinch.

For an oil market that has really done fairly little since the start of the year, we do seem to be reaching a tipping point, when a fairly sizable move is about to come in the crude market -- either recognizing the higher prices that the fundamentals of a rebalancing market and OPEC compliance will bring, or the blow up that comes with traders who are all in the same boat, diving into the porthole en masse.

Now, there's always two sides to every story, and with enormous specs on the long side, there has to be by definition enormous others taking the bets. And here the takers are obvious: They're domestic producers, about to file quarterly reports, who've seen a greater than $50 crude price as a respite for all those rigs they've been adding over the first quarter this year -- about 200 or so. 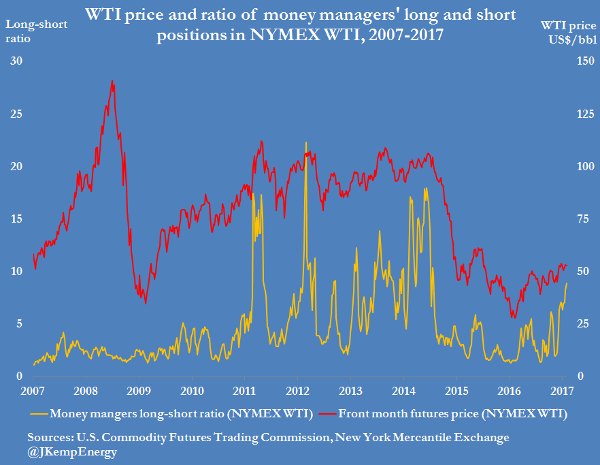 Are they necessarily more right than the speculators?

History -- or at least my long history in futures -- says that they almost always are. In a battle between pure money on one side and commercial physical assets that are the underlying "currency" of the bet, the commercials almost always come out on top. That chart I've given you, if history is the judge, would indicate a fairly sizable, and imminent, move down.

But -- a big but -- there is a rumor that OPEC members, particularly Saudi Arabia, are using private speculative fund managers to be part of the rush to the long side. It wouldn't be the first time, that's for sure. Yes, Virginia, it's true -- Santa Claus is a fake and Saudi Arabia has often used their inside information to make an extra "bonus" in the futures markets.

And what is their inside information? It's got to be about compliance, and internal conversations among OPEC ministers of the steel grip needed to reclaim control of global oil prices, and the will to do it throughout 2017, and into 2018, if required. After the beating that sovereign wealth funds took in 2015 and 2016, there's no reason to believe the Kingdom won't look for another couple of billion dollars of "bonus" bet money paying off, if they believe the opportunity is there.

Just something to keep in mind for the next few weeks.

As for me, I'm of the belief that every dip in oil prices and in oil stocks, is now an opportunity not to be missed. The sagging of oil stock prices in the last weeks has brought some of my favorites to real nice buying zones, that is EOG Resources (EOG) at $97, Action Alerts PLUS charity portfolio name Cimarex (XEC) at $127 and Anadarko (APC) at $67. So even if "everyone" is long, it might not mean that you'll necessarily get that quick dip in prices to load up on oil stocks at even lower, super cheap prices. If I didn't have a sizable position in oil stocks yet, I'd take this moment to begin an accumulation.

Want updates and alerts every time Jim Cramer makes a trade? Sign up here for Action Alerts PLUS.

Get an email alert each time I write an article for Real Money. Click the "+Follow" next to my byline to this article.
TAGS: Investing | U.S. Equity | Energy | Markets | How-to | Risk Management | Short-selling | Stocks