The many big pending deals in the tech sector right now are presenting an interesting opportunity of investors. While they do bring a measure of risk with them, in each case, low valuations limit how much downside exists in a worst-case scenario.

I'm talking, of course, about Broadcom's (AVGO) ongoing pursuit of Qualcomm (QCOM) , Qualcomm's own pursuit of NXP Semiconductors (NXPI)  and Dell's exploration of an IPO or a reverse merger with VMware (VMW) .

Let's look at each in turn.

For this potential deal, the opportunity isn't hard to see: Qualcomm trades at about a 20% discount to Broadcom's revised $82 per share ($60 per share in cash, and $22 per share in stock) offer price. A deal certainly isn't guaranteed to happen: For the time being, Qualcomm continues to reject Broadcom's overtures, and if a deal is inked, it would likely see both close regulatory scrutiny and pushback from Qualcomm clients worried that Broadcom will significantly cut Qualcomm's R&D spend.

However, it's also not far-fetched to imagine a deal happening, given that:

But in the event a deal doesn't happen, Qualcomm shares might not drop a ton. In January, shares rose after the company outlined a plan for producing $5.25 in adjusted EPS in fiscal 2019 (ends in Sep. 2019) even in the absence of settlements with Apple and the unnamed OEM. Should settlements be reached, Qualcomm expects annual EPS in the range of $6.75 to $7.50.

Qualcomm's shares trade for less than 13 times the settlement-free EPS outlook, which the company insists is valid whether or not its pending $110 per share ($47 billion) deal to acquire NXP goes through -- should the deal not happen, Qualcomm plans to boost its EPS by using the funds meant for the deal on stock buybacks. And shares trades for just over 9 times the midpoint of the EPS range Qualcomm expects to reach should settlements be inked. 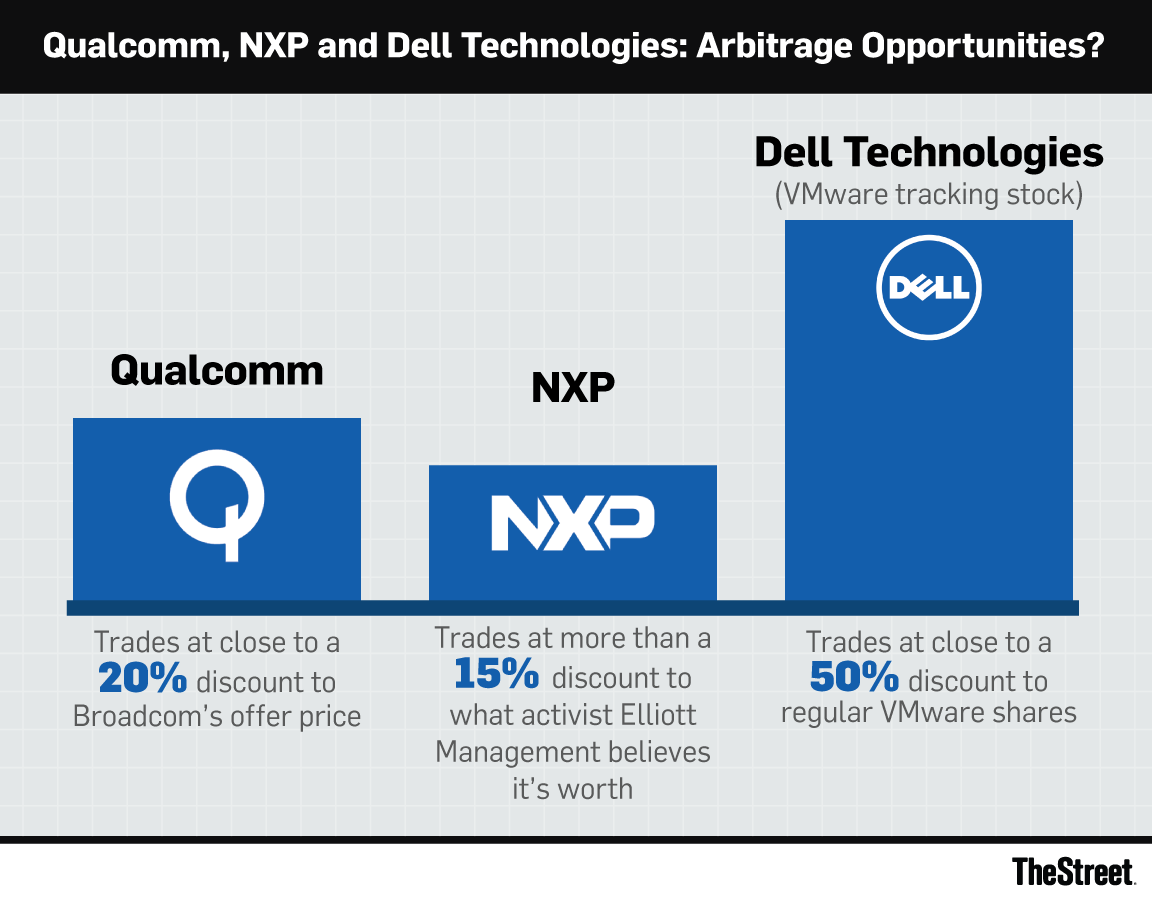 It's quite likely, of course, that Qualcomm will have to pay a little more than $110 per share to acquire NXP. At least 80% of NXP shares have to be tendered at that price for a deal to happen, and as of Feb. 9, only 1.5% of shares had been tendered, as NXP shareholders continue demanding a higher bid.

Elliott Management, citing the big run-ups NXP's peers have had since the company agreed to sell to Qualcomm, insists that NXP, which currently trades around $116, is worth over $135 per share. Whether or not one agrees, NXP only trades for 14 times a 2019 EPS consensus of $8.09, a valuation moderately below that of peers such as Texas Instruments (TXN) and Analog Devices (ADI) . That keeps a lid on NXP's downside should Qualcomm walk away -- particularly since NXP, like Qualcomm, could announce major EPS-boosting buybacks in the absence of a deal.

To be fair, some discount is warranted, since the tracking stock carries no voting rights and (in the event of a liquidation) doesn't grant its owners a legal claim to VMware's assets. But the current spread seems pretty excessive. VMware currently sports a $47.1 billion market cap, which would make a 53% economic interest technically worth about $25 billion. But the DVMT tracking shares are presently worth just $13.7 billion.

The spread widened in late January, as reports (later confirmed) emerged that Dell, which owns 82% of VMware, is thinking of going public or doing a reverse merger with VMware. While VMware shares have fallen as investors registered their disapproval of a merger with Dell's massive hardware operations, the tracking stock fell harder still. Investors hate uncertainty, and worries about how Dell's maneuvers could affect the tracking stock have taken a heavy toll.

Perhaps that toll has been too heavy, however. Not just because of the spread that exists between the tracking stock and VMware's regular shares, but because VMware's regular shares may have sold off too hard. Any reverse merger will have to be cleared by a special committee within VMware's board that looks out for minority shareholders, and there's clearly a lot of pressure right now for the committee to drive a hard bargain.

Moreover, it's not a given right now that Dell will opt for the reverse-merger route. Should it go for a standard IPO, both VMW and DVMT shares are likely to pop in response. There were also reports at one point that Dell is thinking of buying out VMware's minority holders to grow its exposure to the company. As a reader observed, should Dell want more VMware exposure, it makes a lot more sense to buy DVMT shares than VMW shares, given the huge discount the former trade at.

Plenty of unknowns clearly exist in all three situations. But all things considered, the risk-reward looks favorable in each situation as well.