Kimberly-Clark Corp. (KMB) was reviewed back in July where I wrote, "KMB hesitated in January and early February in the $122-$120 area on the way up and this might provide some temporary support on the way down. Better support, however, lies in the $116-$113 area."

KMB failed to encounter much support in the $122-$120 area and while some support developed in the $116-$113 area we saw further weakness down to $110. Prices rebounded into early December but failed at the underside of the declining 200-day moving average line and ultimately declined back to around $110. Let's close closer.

In this updated daily bar chart of KMB, below, we can see what could be a possible small double bottom pattern with lows in November and February. A rally above $124 is needed to complete the pattern.

While prices are back to their November lows the On-Balance-Volume (OBV) line is currently well above its respective low suggesting that prices fell more of their own weight, so to speak, than because of aggressive selling. This observation could mean that prices snap back quicker. In the lower panel is the 12-day momentum study which shows a small bullish divergence -- equal lows in momentum in January and February compared to lower lows in price.

In this weekly bar chart of KMB, below, we can see how the $110 area has stopped a number of declines. The volume of trading was heavier in February than December or January so we could say that the increased selling pressure was absorbed. The weekly OBV line has not broken down to a new low and the Moving Average Convergence Divergence (MACD) oscillator could cross to a fresh signal or reverse to the upside as the next move in prices will quickly influence this oscillator.

In this Point and Figure chart of KMB, below, a downside price target of $99.06 is shown but a trade down to $108.68 would be needed to weaken prices. 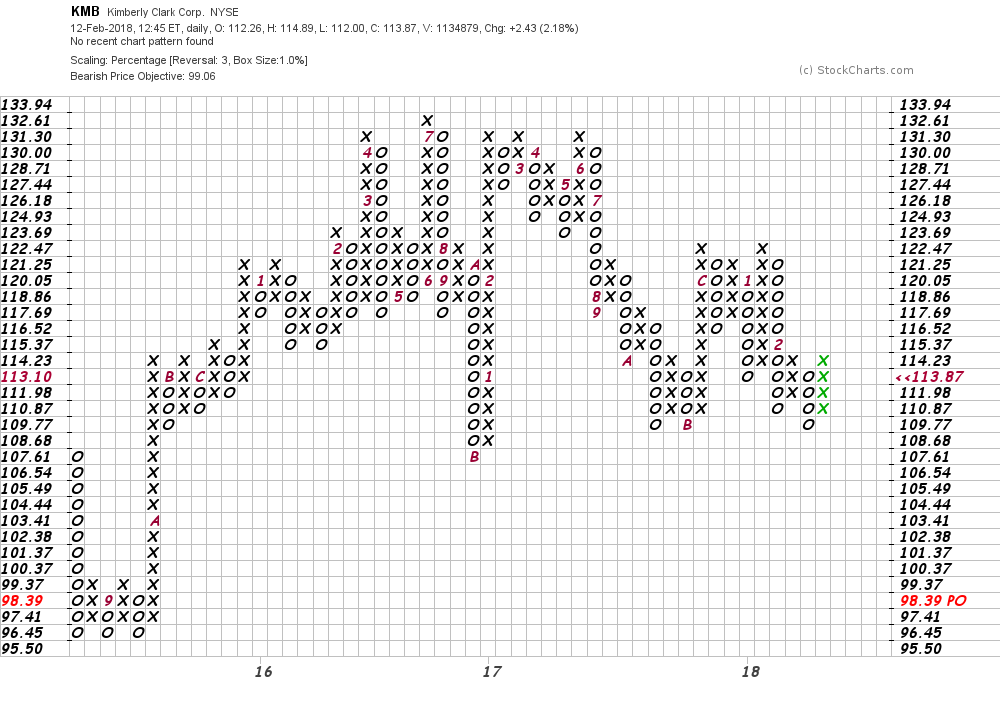 Get an email alert each time I write an article for Real Money. Click the "+Follow" next to my byline to this article.
TAGS: Investing | U.S. Equity | Consumer Discretionary | Consumer