It's all one big damn secret as to how much some companies rely on dying Sears Holding  (SHLD) for X number of their sales each year. You have to be thinking of this company's demise, even more so right now, despite the nifty press release Sears released on Friday about a $1 billion restructuring that sent shares booming as much as 50%.

Trust me on this one. After spending several days trying to find out this type of information -- either via contacts or poring over SEC filings -- this fella came up empty. And that's too bad, seeing as various companies, from toy maker Mattel (MAT) to boot maker Wolverine Worldwide (WWW) , do sell a good number of things at Sears and Kmart.

In turn, there is major risk -- both in terms of headline risk and financial risk -- to companies with exposure to Sears, and you need to understand the linkages. For, mark this down: if Sears goes out of business -- potentially likely within the next three years -- it will make global headlines and there will be major moves in the share prices of exposed companies. I am loosely calling these "Sears Death Trades."

The cost of insuring the dying department store's debt against default has nearly doubled over the last month, according to Bloomberg data. The credit default market is pricing in a roughly 50% chance that Sears will miss a debt payment and possibly go bankrupt by year-end. Shares crashed over 30% in January in the face of asset sale news. The market is saying some loud things here about the company's survival, and one must pay attention.

So, if Corporate America doesn't want to share its exposure to Sears, allow this writer to lay it all out for you in a tidy list. Thus far, none of these names are trading in lockstep with Sears. But if you feel strongly about Sears' death, then starting to make bets against these companies could prove fruitful.

Happy Friday, and you're welcome.

If Sears Goes Under 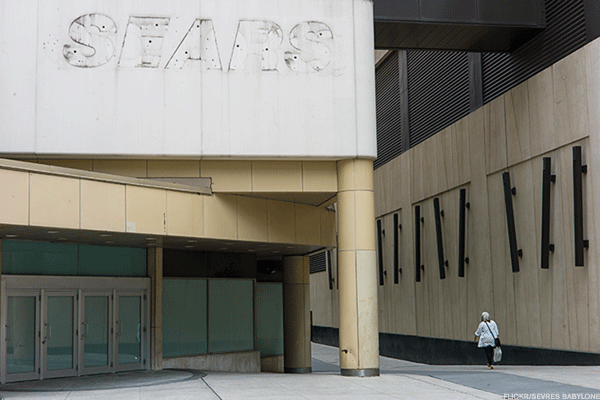 Lights out soon for Sears?

Appliances: Instant losers will include Whirlpool (WHR) and Samsung. Not only will each lose a major distribution channel, but will have to endure months of their brand being cheapened due to close-out sales. Think of this as the Under Armour (UA) Effect -- the sportswear maker lost The Sports Authority (it went bankrupt) and other distribution channels last year and has had to suffer through waves of discounted inventory sitting at TJX Companies (TJX) owned TJ Maxx and Marshall's.

Jim Cramer and the AAP team holds a position in TJX Companies for their Action Alerts PLUS Charitable Trust Portfolio. Want to be alerted before Cramer buys or sells TJX? Learn more now.

Tires: Not a huge loser, because Sears Auto Centers have been awful for years, but Goodyear (GT) will lose a distribution channel. It's unlikely Goodyear will be hugely affected.

Clothing: Step right up and pick your loser. Carter's (CRI) (baby clothes), Sketchers (SKX) and Wolverine Worldwide (work boots) are some of the most exposed clothing retailers to Sears. Nike (NKE) is also on offer at Sears, but not in a material way.

Land's End: One of the biggest losers from a potential Sears demise. Lands' End had 219 shops in Sears as of the third quarter ended Oct. 28. Those shops collectively had a brutal three months. Sales in the company's retail segment, which mostly comprises its Sears shops and its own retail stores, plunged 15.2% from the prior year to to $39.3 million. The Sears business now makes up about 14% of Lands' End's overall sales. All of that will vanish.

Electronics: Based on my prior analyst life -- which included covering the bankruptcy of Circuit City -- Sears going under could really depress prices for Microsoft (MSFT) computers, tech accessories more broadly and large-screen TVs from a Samsung. As a result, this not only presents risk to the manufacturers but also to Best Buy (BBY) -- it may lose business as people shop for closeout deals at Sears.

Camping and exercise equipment: Sears claims it's the largest fitness equipment seller in the United States (nothing to be proud of, as people are spending more to exercise in boutique classes and in discount gyms such as Planet Fitness (PLNT) ). When Sears goes bust, it could weigh on Dick's Sporting Goods (DKS) exercise business for several quarters. To Dick's credit, in recent years it has reduced its floor space dedicated to exercise equipment.

Lawnmowers, outdoor patio equipment: Discounting both at Sears and Kmart on these items could hurt Home Depot (HD) and Lowe's (LOW) in the near term. The same logic applies to the tool business.

Odds and ends: Target's (TGT) most profitable businesses -- home and apparel -- could be hurt due to liquidation sales. The standing of Seritage Growth Properties -- Sears top tenant -- comes into question. Now would be the time to start making bets against this REIT.

If Kmart Goes Under 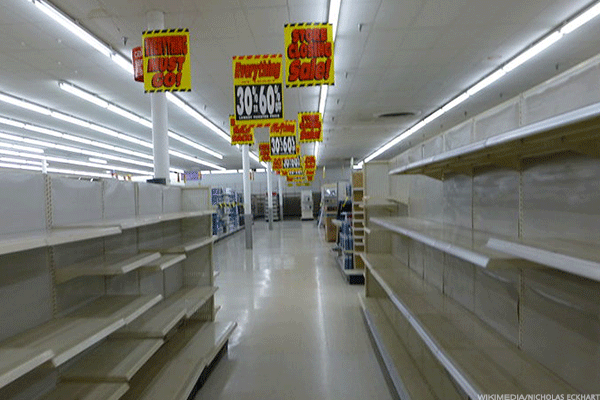 Liquidation sales at Kmart will hurt some

Dollar stores: Should Kmart go under, it may be a short-term disruption to the dollar stores such as Dollar Tree (DLTR) and grocery stores. Personal example: there are several Dollar Tree stores around my local Kmart, which will temporarily lose my business as I shop for discounted soup and toilet paper at Kmart.

Toy makers: Hasbro (HAS) , Mattel (MAT) and Jakks Pacific (JAKK) (more so Jakks) will be losers. As a result of the liquidation sales, Toys R' Us -- which in its own right continues to battle the shift to online shopping -- could be harmed.

Best Buy: The company will completely dominate the bricks-and-mortar electronics business, and to lesser extent appliances. Best Buy gained a good amount of market share after the Circuit City liquidation sales stopped and the chain went away.

J.C. Penney (JCP) will essentially be the department store left in many malls. Hence, it will win across the board.

The mall: Some of the best mall-based specialty apparel names like Foot Locker (FL) will win. Sears stores have been empty for years, and when these locations start to get leased out to traffic-driving grocery stores, movie theaters, H&M, Dave & Buster's (PLAY) , health centers and Dick's Sporting Goods, it could bring traffic back to the mall.

Get an email alert each time I write an article for Real Money. Click the "+Follow" next to my byline to this article.
TAGS: Investing | U.S. Equity | Consumer Discretionary | Consumer Staples | Bankruptcy | Markets | How-to | Risk Management | Sports business | Stocks