"The secret to winning is constant, consistent management." -- Tom Landry

OK, gang. One thing we never do, is act out of fear, right? We think about our environment. We start with a mental adjustment. We then move on to make decisions based on our own assessment of the always developing risk/reward ratio. Logic is our weapon. Emotion is our enemy. We spoke of Cerberus yesterday. The three-headed beast who was eating your portfolio. The beast lives, but after yesterday, has that monster's blood lust yet been sated? Is it time, or even past time, to "work" you way back in, assuming one is not already fully invested?

Of the many forces putting downward pressure on equity markets, the oil patch remains weak; however, we did tell you that for WTI Crude $64 was a gateway level, which if broken would send the commodity toward $60. Crude has seen $60 support now throughout the dark of night. Support here depends largely on dollar behavior. For the moment, the greenback looks tame. A crack here allows for $58. My instinct tells me that some oil shorts likely cover here, lending this commodity some help. U.S. Treasury's auction of $16 billion worth of 30-year paper yesterday afternoon was at least as sloppy as was the auction of 10-year notes on Wednesday. The good news there is that the Treasury department is not scheduled to try to borrow any money today. Huzzah. There is a broad, perhaps undeserved, fear of consumer level inflation that has spread across the realm. More on that in just a bit.

Other than those fundamental forces, the pressure placed on equities came from, shall I say, temporary forces. Though temporary, the threat of a government shutdown (an actuality for now), and the unwinding of crowded volatility-linked strategies are certainly capable of having an extended impact upon sentiment. On top of that, we just don't know how long it will take to flatten what is estimated to have been $1.5 trillion worth of these perverse strategies out there to de-levered. This one is the wildcard, and obviously a lot of folks were in these strategies without truly understanding them. That includes professionals. Worthless maggots.

Two stories caught my attention. While doing my prep work for the overnight session, I noticed in a Financial Times story the tale of the LJM Preservation and Growth fund. This fund had attracted $100 million in new funds in December alone. Assets stood at $812 million at the start of February. By Wednesday evening, that number was down to $141 million. The fund at that point filed with regulators that it would not only not be accepting new inflows, but would not be charging fees for investors seeking redemption. That hurts. There's more. There's plenty more.

This morning, I see Thomson Reuters' Lipper unit is reporting that for the week ended Wednesday, ETF outflows totaled $21 billion, with a B. Mutual fund outflows added another $3.0 billion to the washout. Obviously, money is moving out of equities in a hurry, and by the looks of things, simply moving into cash. The scary thing is that Thursdays' back yard beat-down is not even in this data, and this data is still the worst seen since Lipper started keeping track of these things in the early 1990s.

From my perspective, some of the recent money that just piled into equities in January has already headed for the exits. The retail investor may have been burned yet again, and that is most unfortunate, because folks like that will stay away from the marketplace for years now. We have already witnessed such behavior other times in market history.

My Thoughts and My Actions

I have no idea how long the inverse/levered volatility trade will take to truly unwind. I do know that equities are a lot less overvalued than they were in late January. I believe that though the environment has changed, markets are very close to becoming tradeable again. Late yesterday, I became a little aggressive, more so than on Monday through Wednesday. Remember that I had gone to higher cash levels a couple of weeks ahead of the January highs, so I missed peak valuation, but I also missed being dealt a knockout punch here.

Last night, I initiated long positions in Bank of America (BAC) and Goldman Sachs (GS) amid the extreme weakness in the financial space. I also initiated a long in Walt Disney (DIS) , as I thought earnings warranted better treatment than the name received. On top of this, I added to existing longs, Apache (APA) and International Business Machines (IBM) on the weakness. I shorted Tesla (TSLA) after the opening on Thursday, and will likely pair the winnings there off with some of my losses and get both off of my book. I was thinking General Electric (GE) , but if that one's not finally priced correctly then, hey, Flannery ... "sell something."

Both Action Alerts PLUS charity portfolio holding Nvidia (NVDA) and Activision (ATVI) behave well this morning, after solid beats last night for their respective quarterly results. We gave you those names yesterday with target prices. If NVDA hits the primary target today ($248), we take off three eights of the position, and reset.

Upon Further Review (Flag on the Play)

This whole ball of wax was set in motion by that "inflationary" January jobs report released by the Bureau of Labor Statistics last week. Was it really so inflationary? C'mon, gang. Let's take a look at the Establishment Data (Table B), shall we?

Hmm. I see that 2.9% annual increase in year-over-year wages that has everyone and their uncle all agog. Oh look, what's that? Average workweek dropped from 34.5 hours to 34.3 hours. Why is that important? Because the average weekly paycheck printed at $917.18, down from December's $919.43. That's right. People made less money in January on average than they did in December, and the media, along with all of those who do not actually buckle down and do their homework told you that the BLS January data was inflationary. How could it be, if folks made less money? All folks had to do was use their heads. January Core PCE and CPI already told you that consumer level inflation was lukewarm at best (In fact the PCE told you that there was almost none). We'll get some more data on this on Wednesday.

Let's go to Table B-2. Apparently, there were fewer hours available to employees working in the mining, construction, manufacturing, transportation, retail, information, and hospitality fields. See where I'm going? There was simply less demand for labor in January, and this was broad, not at all confined to one corner of the economy.

You say you prefer the household data (Table A)? OK, then let's go there. Oh, I see the unemployment rate went higher for adult males, teenagers, African-Americans, Asians, Hispanics, and high school graduates with no college. Just a few folks spread across those demographics. The number of folks working part-time for economic reasons also increased. You may have notice U-6, the broadest measure of labor force underutilization, rise from 8.1% to 8.2%. Those numbers are seasonally adjusted. Take away that adjustment, and the number actually increased from 8.0% in December to 8.9% in January. Now, a seasonal adjustment for the post-holiday period is indeed reasonable, but "full employment"? You sure you don't want to re-think that one? Hey there, sport... I'm talkin' to you.

I am not going to over-analyze this chart, because that would be stupid, and I try to live in the real world. Obviously, the broad indices are short-term oversold right now. If anyone tries to "reveal" this to you today, try to tune them out for life -- unless they're in high school.

This is what you need to know: start a traditional Fibonacci model with the wobble the blue chip index experienced last April (its most serious test of 2017), and you quickly see that a 50% re-tracement shows up just around 23,500. Crank up a Fibonacci Fan model with Election night 2016, and guess what? The index is still on trend. Poof. The 38.2% re-tracement off that trend line land you where, gang? Oh, right, around 23,500.

What does this mean? It means that there could still be some downside. It also means that we have already sawed a lot of wood. You do what you want. If you read this article, then you know that this battle is afoot, and I am already on the field. 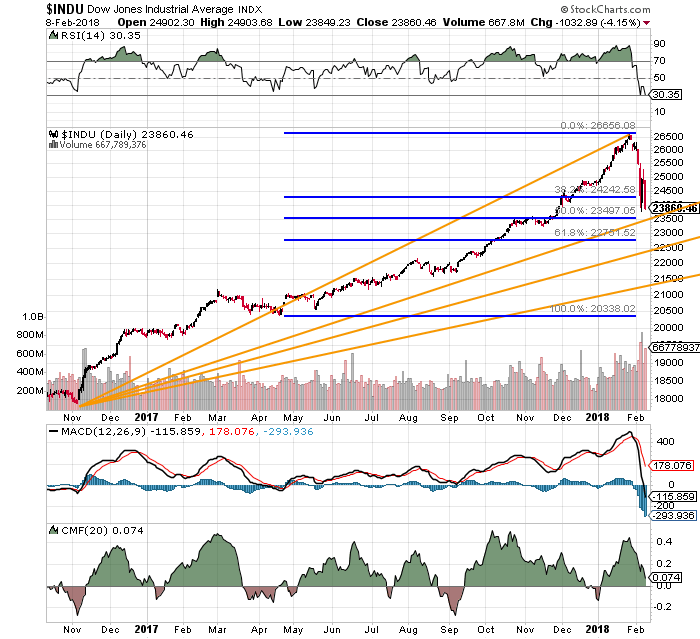 Get an email alert each time I write an article for Real Money. Click the "+Follow" next to my byline to this article.
TAGS: Investing | U.S. Equity | Markets | Economy | How-to | Risk Management | Stocks