Estee Lauder Cos. (EL) was under selling pressure for much of last year. Recently, prices have stabilized and improved a bit, but is this enough to cover up the blemishes? A closer look is warranted.

In this 12-month daily bar chart of EL, below, we can see a peak in April and a long decline until prices touch a bottom in December. Prices stabilized from November into January and have even rallied a bit, turning the 50-day moving average line positive. The slope of the 200-day average line is still bearish.

The On-Balance-Volume (OBV) line declined sharply from July and tells us that there was some aggressive selling and liquidation of EL. The OBV line has stopped going down but it has not improved much in the past two months. The Moving Average Convergence Divergence (MACD) oscillator moved above the zero line in January for an outright go long signal.

In this weekly chart of EL, below, going back three years, we can see that the stock is trading below the declining 40-week moving average line. The weekly OBV line has been weak for months and only has an uptick in recent weeks. The MACD oscillator has crossed to a cover shorts buy signal.

This Point and Figure chart, below, has good news and bad news. The good news is it shows a potential upside price target of $97 but, or BUT (for emphasis), there is considerable resistance above the market from $89 to $94. 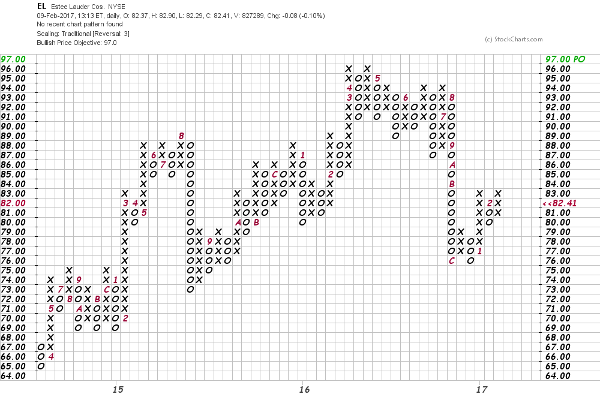 Bottom line: EL could work higher but I don't have much confidence in it. A pullback below $79 will probably mean the upside move is over.

Get an email alert each time I write an article for Real Money. Click the "+Follow" next to my byline to this article.
TAGS: Investing | U.S. Equity | Consumer | Stocks