World Wrestling Entertainment (WWE) continues its impressive resurgence. I don't think I've seen this much excitement around the company since Hulk Hogan took down the Iron Sheik. This morning, the company reported adjusted earnings of $0.21 per share, slipping a penny past estimates. Revenue of $211.6 million also exceeded estimates by nearly $3 million.

Profits were driven by the increased monetization of video content as paid subscribers continue to grow. WWE estimates it will have 1.53 million paid subscribers as of the 2018 first quarter. The company continues to benefit from its diversified revenue streams of ticketing revenue, merchandise, monthly subscriber fees, license fees, and advertising revenue.

The WWE story isn't about today, though. It's about tomorrow. Well, more specifically, it is about TV rights. All eyes are focused on the company's next TV rights deal. I couldn't get through a single analyst's report without seeing it mentioned.

WWE has more social media followers than any other sports property. Combined with a strong direct-to-consumer revenue, WWE can grow outside of just this TV deal; however, the majority of any increase in the TV rights deal will go toward the company's bottom line. This should translate to additional EPS growth of 5% to 20% in addition other internal growth. 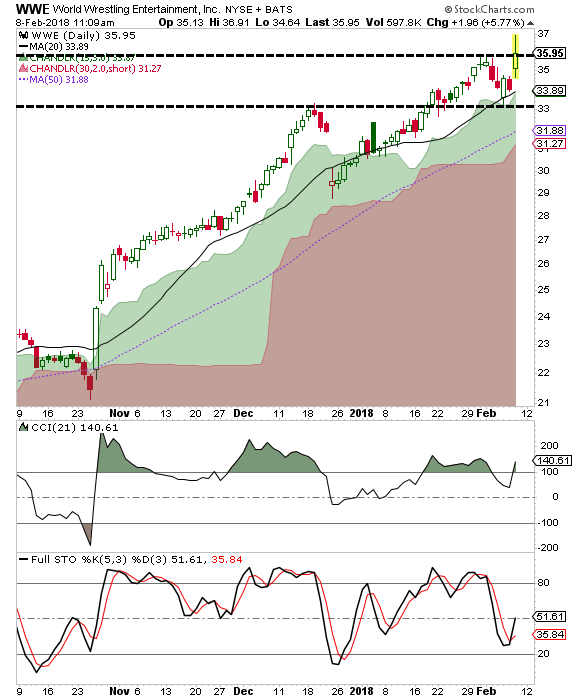 The shares are holding up well today, despite the mid-morning selloff. WWE may fail at a breakout though. The weight of the market has pushed the stock back into the $33 to $36 trading range. I would want to see it close above $36 before playing the long side. We'll see some scant resistance above $36 from the folks who bought early this morning, but that shouldn't amount to much.

What matters is anyone who bought this stock before today is not in a losing position. That translates to no one feels a pressure to sell. The only internal (shareholder) pressure I can foresee is if CEO Vince McMahon sells additional shares to cover the new XFL venture. I do anticipate heavy cross-marketing of the XFL and WWE brands, so I expect any weakness will be offset with a benefit to the company as a whole.

On the downside, I would not want to continue to hold the shares if WWE closed below $33. I would use that target as my stop or strike to hedge shares. A close under $33 targets $29 as the next stopping point.

While I don't expect WWE to have another 70% move over the next 12 months like the last 12 months, I believe it will outperform the market and the nearly 11% short interest should help propel shares.

Unless the company completely drops the ball on renegotiating TV rights, a push into the lower $40s is realistic assuming the overall market doesn't crater. Should the overall market falter, I still expect WWE to outperform. That's a fancy way of saying it will fall less than its comparable index.

Get an email alert each time I write an article for Real Money. Click the "+Follow" next to my byline to this article.
TAGS: Investing | U.S. Equity | Earnings | Entertainment | How-to | Stocks

Buyer Beware, as We're Nowhere Near a Bottom in Cockeyed Market Optimism

It appears many market participants are willing to take on risk at the worst possible time.