"Nothing endures but change." -- Heraclitus

Do you remember meeting Cerberus? Surely you must, for it was only late yesterday that the Hound of Hades tore into the meaty flesh of thy portfolio, turning what had been a decent day for the net long crowd into one that saw the major equity indices close at or near the bottom of the daily chart. Why? Oh, why did markets turn ugly, and why so quickly? You can boil that question down and find three likely culprits, just as that beast guarding the underworld of Greek mythology bore three ugly, ferocious heads.

The first sign of weakness came earlier in the day from the oil patch, and markets, after wobbling a little, seemed to recover. Everyone pointed to the weekly inventory number that the EIA put to the tape. Problem with that is only that the 1.9-million-barrel increase in national supply was actually below estimates. It was more the Energy Information Administration's report that U.S. production had risen to 10.251 million barrels per day last week, screaming past the psychological 10 million level. This is the same EIA that predicts U.S. production to hit 10.6 million per day this year, and an incredible 11.3 million next year. As a trader, this has me somewhat less confident in my recent entry into Exxon Mobil (XOM) , but extremely satisfied with the prospects for my already existing long in Schlumberger (SLB) -- which is also a holding in Action Alerts PLUS, which Jim Cramer co-manages as a charitable trust. My thought is that oil services will be were investors will benefit the most in this environment. For those trading the WTI futures space, $64 was the gateway level; now a $60 test becomes just as likely as a re-test of that $64 level. Do not be surprised by that.

The weak auction did not help matters much, either. Mid-day yesterday (1pm), Treasury sold off $24 billion worth of 10-year notes. Bid to cover was less than impressive. The yield awarded was higher than the prevailing bid at the time of the announcement. Indirect participation hit the tape at more than two thirds of the accepted bids. This represents, for the most part, foreign participation, and is actually an acceptable number. I think what shook folks a little yesterday was the weak-ish overall demand, with yields at multi-year highs. Understand this: with levels of Federal borrowing only increasing and reinvestment of maturing securities only decreasing, the free market is going to take back control of interest rates. Folks may have forgotten, but credit, in a capitalist economy, does (and should) have a price that fluctuates based on the underlying financial environment. This is not wrong, nor bad. This is actually pure. We will accept and adjust to this change.

Tied into all of this was a suddenly resurgent U.S. dollar. Rising valuations for the greenback put the whammy on the entire commodity complex for the day. This includes oil. The upward pressure on rates also puts upward pressure on the dollar. Thought the Senate's stated intent to spend big would put pressure on the home currency, didn't you? You would not be alone. It would seem that the Forex gang was already pricing in a partisan divide. Mitch McConnell and Chuck Schumer acting the part of best pals was not a welcome sight for that crowd. This trade will remain volatile this morning. It looks as if China has done something overnight to weaken the yuan, and we will hear from Mark Carney at the Bank of England this morning as well. Carney is considered to be a hawk at heart (remember his policies at the Bank of Canada). Currency traders will listen for a clue as to when the BOE will next raise rates. It is coming. Maybe soon.

So Many Stocks, So Little Time

If I could I would literally write something like 15 articles for you this morning. There are just so many firms reporting, and so many of them are so very interesting. Thank goodness my parents bought me that Strat-O-Matic Baseball game when I was young. I really never would have developed the ability to interpret data and understand evolving probabilities without first becoming a fanatical fan of that game as a child. So, we can't profile everything. We can look at a couple of fan favorites, which are also favorites of mine.

First off, I am long this name. Nvidia was one of my top performers of 2017. I have regularly traded in and out of the name, and I recently added to the name in the midst of the Monday meltdown. Perhaps buy and hold would have been a better strategy for NVDA, but when you are a stock picker, you generally set targets. This is the only way that one may discipline themselves and enforce the occasional ringing of the cash register.

Investors, understand this: would you get in your car and drive around hoping to reach your final destination? No, you would have an address, and probably GPS, right? Why would you invest without a roadmap? Every position needs a planned destination, as well as a place where you'll abort the mission. Back to NVDA.

I truly love the job that Jensen Huang has done with this firm. Today, Wall Street looks for $1.16 a share (whispers as high as $1.22) on revenue of $2.66 billion. That will be growth of some 22%. We know that the strength is going to be in gaming GPUs. This unit represented 59% of the business last quarter. We also will watch for continued growth in the data center market. This is where machine learning, artificial intelligence and autonomous driving live, all hopefully growing businesses for the firm.

One thing that I will watch for, oddly enough, will be the firm's performance in the crypto-currency space. This is not a huge part of NVDA's overall business. In fact, for the third quarter, revenues for this segment dropped to $70 million from $150 million in the second quarter. I would let it go, but Advanced Micro's AMD recent comments on the matter lead me to believe that crytptos are indeed driving more demand for GPUs than previously thought. NVDA competes directly against AMD in this space, though does not have exposure to Bitcoin itself.

Chart of The Day: Nvidia

Upon first glance, one can see that since we last studied Nvidia (NVDA) , the name has largely played by the rules, and colored within the lines. Notice the continued positives in Relative Strength and Money Flow. Your daily moving average convergence divergence (MACD) did suffer a bearish crossover during the recent flash crash, but take a second look at that MACD. Yes, the nine-day simple moving average (SMA) has gone negative, but with both the 12-day SMA and the 26-day SMA so far above zero, I would be careful with any bearish position at this point. (I am biased to the long side.)

Keep in mind this stock's strict obedience to the Pitchfork model. Even during Monday's flash crash, that rising trend line was tested, but ultimately held. I did get long a few down there. The stock also seems to obey our favorite Italian mathematician, Leonardo Fibonacci. Notice the precise 50% re-tracement experienced in early December, and the nearly precise 61.8% re-tracement seen just the other day.

You know who also sees that? The guys that the algorithmic traders pay to read their charts for them. That's why trading levels are so much easier to determine in the modern era than they ever were before. These guys read their charts, the other guys write their algos, and then everyone goes back to reading the sports page. We, who do not sleep at the wheel, can hunt these guys down, because they have forgotten how to compete. Nvidia is also a holding in Action Alerts PLUS, the portfolio that Jim Cramer co-manages as a charitable trust. 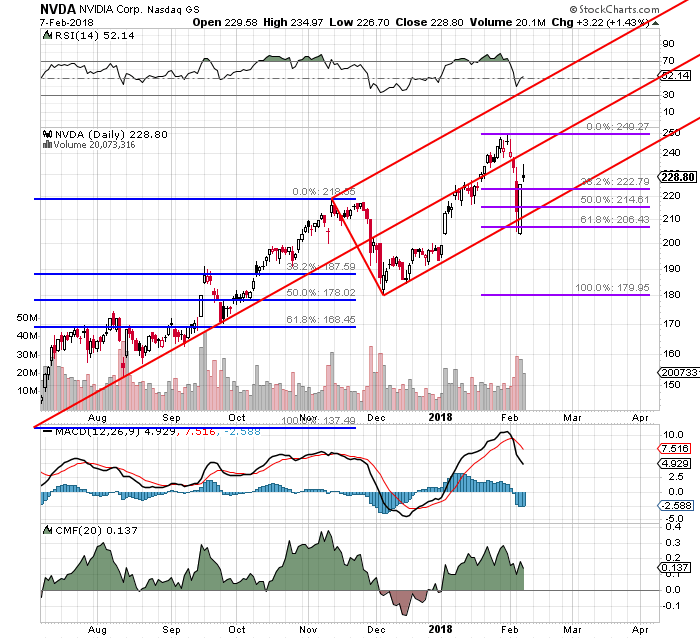 Another holding of mine that reports tonight is the video game maker Activision Blizzard (ATVI) . I know you're tired and time is short, so I'll try to keep this brief. Wall Street is looking for $0.94 per share with whispers running a few cents to the upside. Revenues for the quarter are projected at $2.55 billion. Everyone and their uncle is watching the numbers for player engagement, a metric for how many hours of their life folks are willing to throw away in a fantasy world. No offense, dude, especially if I make some money.

The focus will also land in three other places, I believe. Two recent releases are of the high-profile category: "Destiny 2" and "Call of Duty" WWII". In addition to those two games, we are sure to get some kind of an update on the Overwatch League, ATVI's venture into e-sports. Notice the January breakout, once the league got going ... or was that simply market performance? We'll find out in a few hours. 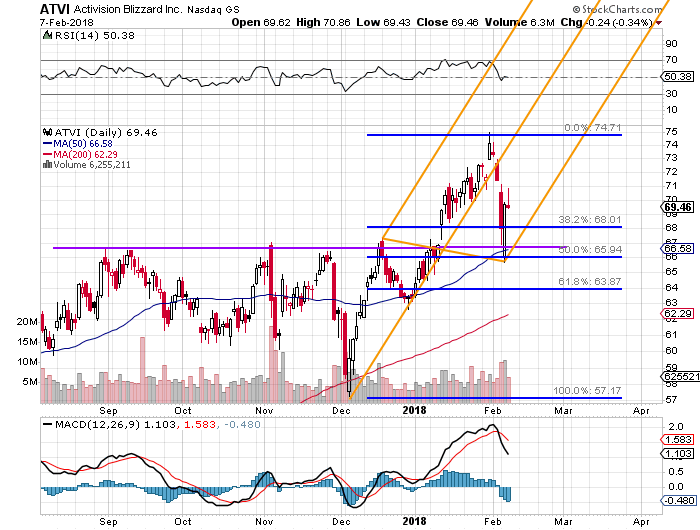 Aggressive Target: I don't think we need one.