3M  (MMM) is set to challenge its highs. Simple. Buy it here or buy the breakout.

In this daily chart of MMM, below, we want to focus on the past three months. MMM rallied in December and January and tested the $180 level. There were several attempts to break the $180 "barrier" and each challenge was rebuffed.

Now take a closer look at the On-Balance-Volume (OBV) line. As prices declined in late January, the OBV line rose. The only way the OBV line rises is if there is heavier volume being traded in MMM when it closes higher on the day. This rising OBV line in a decline tells us that investors used the dip to buy aggressively. In the lower panel, the Moving Average Convergence Divergence (MACD) oscillator is poised to cross, for a cover-shorts buys signal. 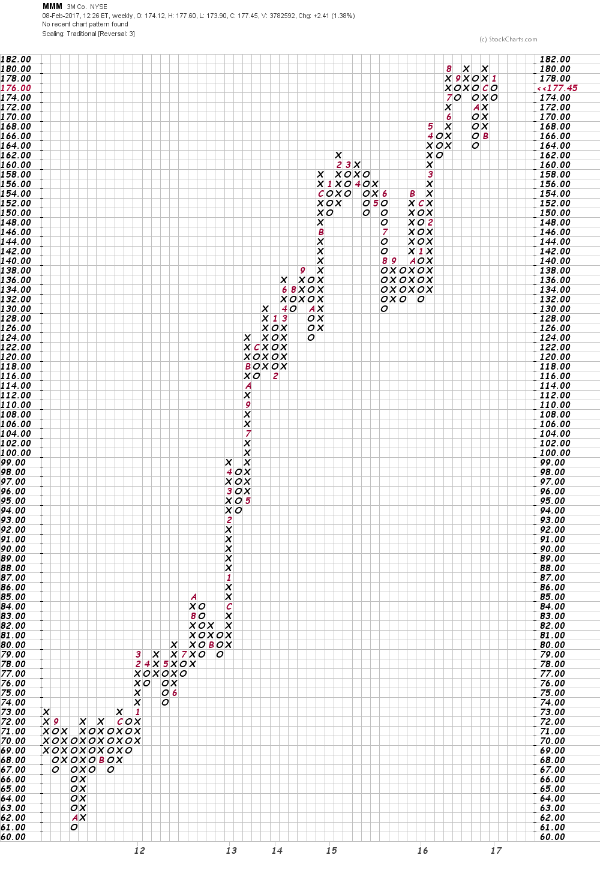 This long-term Point and Figure chart of MMM, above, shows that prices have nearly tripled since 2011. After the rally from $134, prices have been consolidating the gains. A trade at $182 will likely be a triple-top breakout and give MMM a real technical shot in the arm. A decline to $173 would mean I got it all wrong.

Get an email alert each time I write an article for Real Money. Click the "+Follow" next to my byline to this article.
TAGS: Investing | U.S. Equity | Industrials | Markets | Stocks