Williams Cos. (WMB) is still rehabbing from last month's gap to the downside. Our price-based indicators are neutral to positive but our volume driven indicators are suggesting that the bulls are not ready to drive prices higher.

In this one-year daily bar chart of WMB, below, we can see that prices tripled from the early 2016 low to September. Since September prices have largely traded sideways. WMB made a new high in early January and then gapped down below the rising 50-day moving average line. Volume was extremely heavy on the gap day but this did not start a sustained downtrend. The 200-day moving average line is still pointed up.

The On-Balance-Volume (OBV) line, above, has been weakening since early September and suggests that sellers were more aggressive for four months before the gap lower. The Moving Average Convergence Divergence (MACD) oscillator crossed to a cover shorts buy signal.

In this three-year weekly chart of WMB, above, we can see that prices are above the rising 40-week moving average line. The weekly OBV line was positive for much of 2016, but as we start 2017 the line has made a correction and signals that selling pressure increases as prices moved lower in January. The weekly MACD oscillator has been weakening since late October and shows a liquidate-longs sell signal and is not far from crossing the zero line for an outright sell signal. 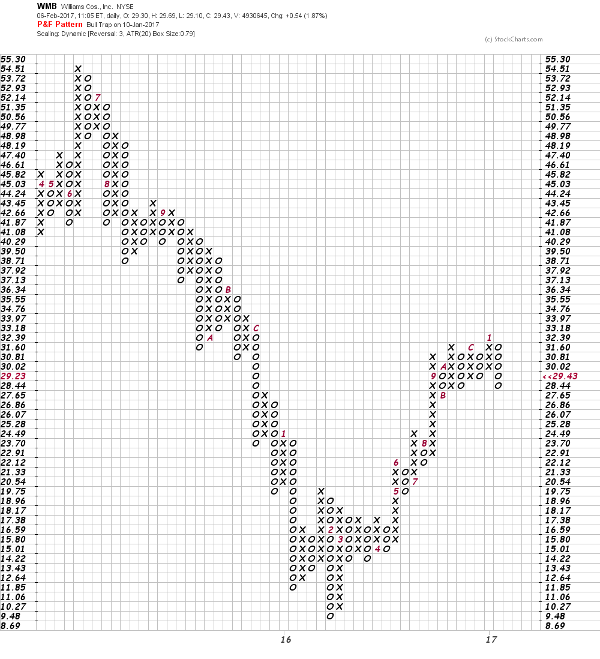 In this Point-and-Figure chart of WMB, above, we can see four attempts to trade higher (Xs) and four columns to the downside (Os). A trade at $27.65 looks like it will give the bears the upper hand and could precipitate further declines.

Bottom line: WMB has struggled to make new highs the past five months and the odds are slightly in favor of the bears. Longs should protect positions.

Sellers of RUN have been more aggressive this month.

BP's Dividend Cut Was Painful, But Better Days Are on the Horizon

BP has become an appealing stock for income investors.

Come on Market, Which Is It: Growth or Value?

October can be a tricky month. But all asset classes are linked to U.S. dollar right now.