"There are hunters, and there are victims. By your discipline, cunning, obedience, and alertness, you will decide if you are a hunter or a victim." -- James Mattis

Tried to watch the Super Bowl. S&P, Dow industrials futures, Nasdaq futures, all opened in the hole on Sunday. The trading was not only volatile, but violent. Asia was bad. Then, so was Europe. People try to talk football. Foreign media interrupts. Then, the worst of all possibilities happened. Yes, there was a bazaar halftime show, but no, that was not the worst of all possibilities. The football game actually held my interest. Trying to work through an interesting game like that is ridiculous. But, that early pressure on the futures markets was inescapable. Has sentiment changed this rapidly?

After a week that dragged most of your broader equity indices down a rough 3.5% to 4%, it becomes obvious that investors who were caught off-guard last week feel like they have something to defend. Now, after inflow upon inflow, folks suddenly seem to be hesitant to buy this dip. Instead, some have a hairline trigger on their outs. The truth is simple: the environment has changed. The easy money has been made. Is the market done for? No, I do not think so; but now you either adapt to what comes next and learn how to overcome new obstacles, or you go away.

Here lies the epicenter of our changed world. Our domestic economic picture remains fundamentally sound, and it's not just us, its everyone. So far, fourth-quarter earnings are screaming to a 78% beat rate for expected earnings per share. Revenue growth is running closer to 8.5% than it is to the expectations of 7.1%. It's not just performance; guidance is, for the most part, excellent as well. So, just what is the beef?

Gang, it goes like this. Much of the euphoric run to the land of overvaluation was accomplished in parabolic fashion as we headed into earnings season, and it was based much on the improved tax condition expected for corporations. The budget that this tax plan will be a part of will be highly reliant upon deficit spending. Reaching a budget deal doesn't really feel like it will be a snap now, does it. Throw in rumors that China will either slow down its purchases of Treasuries or start selling them. Mix that in with tariffs on both China and South Korea. Add a dash of a Treasury Secretary who makes public his view on the U.S. dollar and a change in Fed leadership. Wait a second, I thought that Jerome Powell was a Yellen/Bernanke clone. Hmm. Did you? Are you sure?

Jerome Powell is not an academic economist. Personally, I think that's a positive. The truth is that this is neither positive nor negative, but it is different. Different is an uncertainty to the marketplace. Powell has never dissented at an FOMC meeting. I get that. He comes from a business background. What would an economist do about the threat of rising inflation? Maybe take action. It is my highly biased opinion that perhaps a business person would be more aggressive in the role than an academic. I could be wrong, but we don't know. Let's not forget, the higher these yields go, the more expensive deficit spending becomes, and the ECB is less likely to lend us a peripheral helping hand in 2018 and beyond than they have been in the past. The BOJ? Yeah, they're still down the rabbit hole.

Need one more negative moving part? I thought so. How about the U.S. Treasury letting us know that their need is likely to reach more than $950 billion in borrowing this fiscal year, and then top $1.0 trillion in each of the next two years. For perspective, Treasury borrowed between $500 billion and $600 billion last year. Greater supply in the Treasury markets as interest rates start to rear their ugly heads, and the central banks pull back from loose monetary policy. Hmm.

Isn't Anyone on Our Side?

Actually, yes. Back to the fundamentals. After Friday's sell-off, the Dow Jones industrials are trading at "just" 17 times forward looking earnings. The S&P 500, 18 times. The Transports, just 16 times. Those forward-looking earnings have been ratcheted higher as earnings season has progressed, and market indices have surrendered roughly half of their 2018 gains. Quite simply, even by historical measures, valuations are considerably less perverse than they were just a week of two ago.

Then, that tax plan that we were discussing came with the idea of multi-nationals repatriating funds. Well, if those funds are earned in foreign currency, and the dollar is weaker...hmm, some of these firms may have a few more clams in the bank than previously estimated. Now, think. If those same firms must now borrow at increased cost and they have more cash than they thought overseas, then they just might be provoked to use that cash. What benefits? Capital expenditures, competition for labor ... not to mention that, coupled with reduced prices for their own shares, this might just bring those coveted corporate repurchases back to the fore.

You can do this. Environments change. Who do you want to protect your family's standard of living when the chips are down? Who do you think is cold as steel when everyone else loses their heads? Plainly, who would you hire? Be that guy.

Riddle Me This, Batman

The December Core PCE Price Index currently stands at 1.5% year over year. Core CPI? That one "popped" all the way from 1.7% to 1.8% in December. We'll get our January look next week (on Valentine's Day). Are inflation expectations starting to run ahead of actual consumer level inflation? Has this had an inappropriate impact on the longer end of the yield curve?

Yes, last week's FOMC statement sounded a bit wary of coming inflation. Yes, the BLS put a print of 2.9% growth to the tape for hourly wage growth in January. I can answer these points with two arguments that should lessen their impact: For one, the Fed has regularly misfired on inflation, for years now. Second, did not the BLS report also print a decline in the average workweek from 34.5 hours to 34.3 hours? If that does not take some of the shine off the implied increase for demand in labor markets, then nothing does.

What jumps out at you on this chart? Clearly, there has been a rapid decline in Relative Strength. Your daily moving average convergence divergence (MACD) has also taken a grotesque turn for the worse, and now sports a nine-day EMA that lives below zero. Money Flow? That still looks fine, despite the wobble seen over the past week.

Investors will have to adapt to everything already mentioned in this article. Traders are trying to figure out how and where to catch a falling knife. What I see here is a last sale left hanging out in the middle of nowhere, as of the closing auction on Friday. That leaves us either in the position of being short-term oversold, or headed for further bruising as unfinished business leaves us grasping for a toehold.

The Pitchfork model suggests possible support just under 2750. The 50-day simple moving average (SMA) also looks to be curling in that direction. 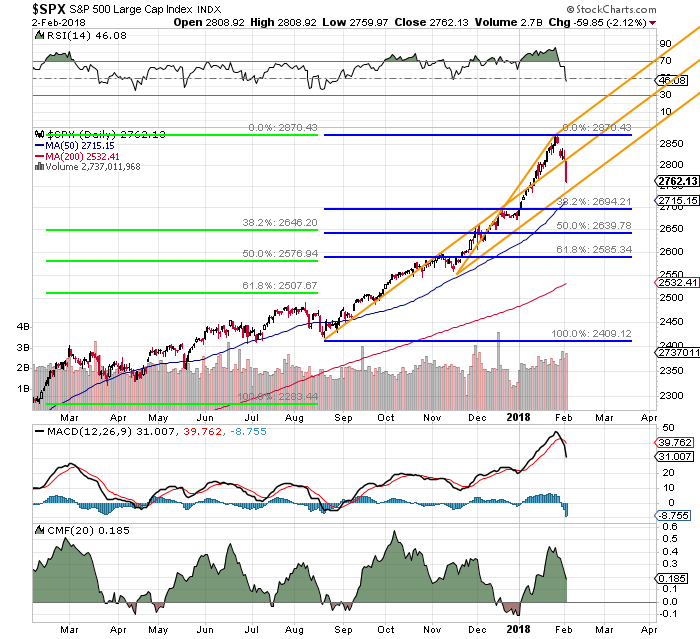 We get the help we're looking for right there, and guess what? The trend will remain unbroken. That spot cracks, and we end looking for help medium-term at the 38.2% re-tracement level of 2694.