"He who knows when he can fight and when he cannot, will be victorious." -- Sun Tzu

Equity index futures are trading deep in the hole this morning. With the exception of the Shanghai Composite, a risk off theme seems to be spreading across the planet, as American traders attempt to rip those oblong grapes of theirs away from the inviting warmth of their well-worn pillows. Yeah, I see the U.S. 10-year giving up more than 2.8%. I see Bitcoin looking for support above $8,000. Capital preservation. The struggle is real. I also see the macro that was released by both the Bureau of Labor Statistics and the Institute for Supply Management on Thursday.

You know what? Some of those numbers might not look so hot on the surface, but the truth is that these data are red hot and supportive of tighter monetary policy moving forward. Perhaps this morning's employment data will provide further foundation for such a concept. First, let's understand fourth-quarter Nonfarm Productivity and Unit Labor Costs. Those numbers painted what looks like a sloppy fourth quarter. Who likes unexpected quarter-over-quarter contraction in worker productivity? Who likes surprisingly high labor costs?

Let's think on this. Did American workers suddenly get paid a little more, and then become lazy? Not likely. This is indicative of what happens when competition for labor suddenly rises. Folks move to new positions, or adjust to their new roles as small unit leaders. Year-over-year productivity still increased 1.2% over 2016, and came after gapping significantly higher for the third quarter. Over a six-month timeframe, the number fits as it should. Are we at 1947 levels? Don't be silly. Still, in my opinion, this report supports the idea that economic conditions are improving for laborers. Perhaps rapidly.

Hot as A Pistol

Rising even faster than order flow is pricing. Thinking maybe the FOMC will hold off on the next increase for the Fed Funds Rate on March 21? Think again. The pricing part of the survey hit the tape with a 72 handle. 72! Raw materials that manufacturers need are broadly hitting prices not seen in seven years. Futures trading in Chicago moves the odds of that third 2018 rate hike from December to November yesterday. Just saying. November does not come with a press conference. Likely, futures traders are moving toward making room for a fourth rate hike. Balance sheet management will matter soon enough. Stay agile.

Now, by no means should this number be taken seriously. The Atlanta Fed is usually way out in front with gaudy numbers early in any quarter, and that can get folks like myself excited at times. Yesterday, Atlanta's GDPNow model upped its running, real time forecast for first-quarter GDP from 4.2% annualized to 5.4%. That's incredibly robust, even for them.

Their explanation for the sudden lurch higher in their model? Their forecast for real consumer spending growth jumped from 3.1% to 4.0%, and their expectation for real private fixed investment growth popped all the way from 5.2% to 9.2% based on this ISM data. The bottom line is that the economy is igniting, more significantly so than anyone expected it could be. When this inflation reaches the consumer as it inevitably will, that will put increased upward pressure on interest rates. I think you will see the 2/10 spread expand, and this will help the banks. For everyone else, the game becomes growth provoked by tax cuts versus rising borrowing costs provoked by inflation and competition for labor.

You thought this would be easy? Gang, we're just getting started. Worry about what? Enjoy the challenge of competing in a changing environment. No fear. Never fear. Who can do this? You can do this. We can do this. We will do this.

Of all of our celebrated FAANG names -- Action Alerts PLUS holdings Facebook (FB) and Apple (AAPL) , Trifecta Stocks name Amazon (AMZN) , Netflix (NFLX) and Google parent Alphabet (GOOGL) -- the one that concerns this guy the most is Alphabet. Oh, speaking or writing about this firm would be so much easier on the brain if we could simply refer to the company as "Google". Apple seems to have obstacles, and a plan to deal with them. Amazon is the beast, in a good way. GOOGL? Another good quarter, really. Revenues reported Thursday night above expectations, and up 24% on a yearly basis. I would love to earn $9.70 a share if I were nearly any other firm. For Alphabet, not really so wonderful.

The hiccup was not in Google properties. Their core business grew 24% year over year, and beat expectations. The problem, if you want to call it that -- since the firm is still cranking out the dough -- is in the operating margin; 24% is a decline from 25% in the fourth quarter for 2016, as well as larger decline from the quarter prior. The hiccups are twofold. Waymo is still a cost that does not come close to paying for itself, and traffic acquisition costs (TAC) are growing rapidly. These costs are representative of the cost of doing business. TAC costs more on mobile devices than on traditional internet. As more and more folks move from desktops to mobile, the firm expects these costs to continue to increase. As long as advertising grows alongside TAC, this is acceptable to the firm.

Chart of the Day: Alphabet

For one, I am up nicely in this name, as likely are most who are involved, even at this last sale. What that means is that I will take a couple of punches before I even think of adding, or cutting the name loose. The name is coming out of a technically overbought condition (What isn't?). That's not going to help. The daily moving average convergence divergence (MACD) looked like it was about to go experience a bearish crossover last night. It will on the open, and the nine-day exponential moving average (EMA) will likely submerge below the zero bound.

Two things stick out to this old dog. The pre-opening last sale is currently right around the lower trend line of the Pitchfork model. That line cracks, and then what? Oh, look, a 38.2% re-tracement of the September through January move, and the 50-day simple moving average (SMA) seem to be within pennies of each other. Hmm. That spot, at least to me, seems like it might just be a good place to find concealment, and set up an ambush. 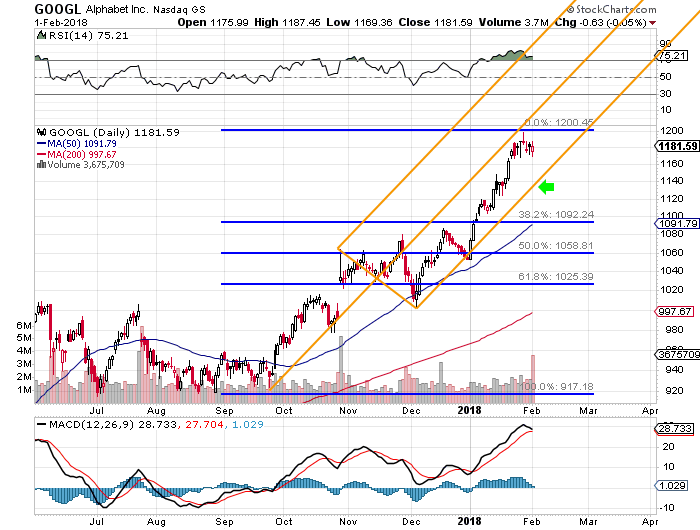 You kids do what you want. I'll take this challenge. The stock opens above the $1135 level, and holds, I do nothing. The spot cracks and fails on one re-test, I sell. The name contracts further, $1092 becomes my targeted point of entry. Right or wrong, I'm taking the next two days off.