Marathon Petroleum (MPC) rallied for much of 2016, regaining much of its previous decline, but what do we see going forward?

In this daily bar chart of MPC, above, going back 12 months we can see three "legs" higher. The first rally was from February to the end of April. The second advance lasted from June to September and the third from October to the beginning of 2017. The slope of the 50-day moving average line has been positive since late July and the 200-day moving average line turned up in early November.

The On-Balance-Volume (OBV) line moved up with the price gains, but turned lower in January, signaling increased or more aggressive selling. There is a bearish divergence from November into January, as prices made higher highs the pace of the rally slowed. The short-term picture suggests a pause or even a pullback towards support around $44. Let's look at the longer-term picture.

In this three-year weekly chart of MPC, above, we can see that prices are above the rising 40-week moving average line. The weekly OBV line hit a low in February 2016 and has moved up and down with the price action.

While the daily OBV line suggests increased selling, the weekly chart doesn't indicate that too. The trend-following Moving Average Convergence Divergence (MACD) oscillator is above the zero line, but the two moving averages that make up this indicator are poised to generate a liquidate longs sell signal. 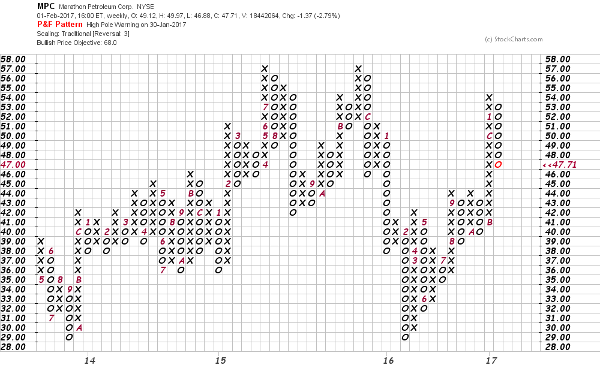 In this weekly Point and Figure chart of MPC, above, we can see that the most recent direction of prices on this chart is down, with a column of Os. Important support begins at $44. If the rally resumes, MPC has a potential upside target of $68.

Bottom line -- the short-term chart suggests that MPC could use a period of sideways to lower price action with declining momentum and a weaker OBV line. This potential correction is probably going to be shallow but I am not sure how long it might last. Let's remember to revisit the charts in a few weeks.

Get an email alert each time I write an article for Real Money. Click the "+Follow" next to my byline to this article.
TAGS: Investing | U.S. Equity | Energy | Markets

Drilling is not picking up, despite the rising geopolitical tensions.