Tesoro  (TSO) has declined over the past two months and has so far found buying interest or support around $80-$79 and the intersection of the flat 200-day moving average line. Will this support hold so that prices can mount a rally eventually, or will we see further slippage to the downside?

Let's check the charts and indicators in hopes of reaching a conclusion.

In this one-year daily bar chart, above, we can see that over the past year TSO has been in a broad sideways market. Recently TSO peaked in December at the same level it reached in March. TSO has slipped below the declining 50-day moving average line to retest the flat 200-day average line. The On-Balance-Volume (OBV) line turned lower in January, telling us that sellers of TSO had become more aggressive. In the bottom panel of this chart is the 12-day momentum study. This indicator shows the pace of a rally or a decline and helps to identify divergences. Unfortunately, there is no bullish divergence to suggest a rally.

We find mixed signals on this three-year weekly chart, above. TSO is testing the flat 40-week moving average line. It won't take much of a decline in price to close below the average line. The weekly OBV line has been moving sideways the past four months so it is more neutral than anything else. The Moving Average Convergence Divergence (MACD) oscillator crossed in early January, giving us a liquidate-longs sell signal. This can also be taken as a take-profits signal within a bullish trend. 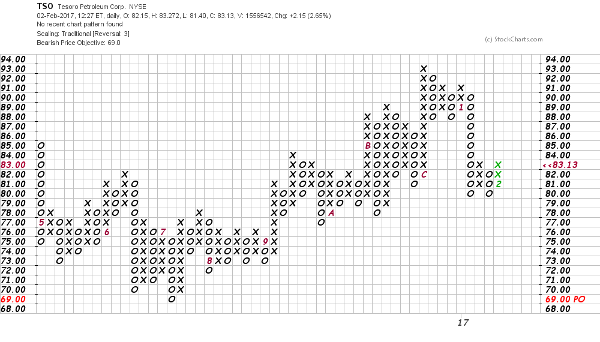 In this Point and Figure chart of TSO, above, we can see both the key $80 level and the $84 level. A trade at $79 would be bearish and a trade at $84 would be a short-term positive.

Bottom line: The price action is not clear-cut on TSO. It has failed to break support but it has not bounced convincingly either. Short-term traders could go long above $84 or short below $79.