"Even when I was playing, I never thought much about the individual honors. I wanted to go to the Super Bowl." -- "Mean" Joe Greene

Are You Ready for Some Football?

What a wild week this has been. Hard to imagine that there are still a couple of days to go. Between the president's State of the Union address, Janet Yellen's last policy meeting as chair at the FOMC, a massive pension fund re-balancing and the reintroduction of volatility into equity, debt and currency markets all at the same time, you could almost forget that the higher impact earnings releases and "Jobs Day" are still out in front of us. More than that, for some there is a big game still to be played this weekend.

On Dec. 20, 1969, my dad, whom some of you know as "the Colonel" took me to my first pro football game. That day, at Shea Stadium in Queens with this little boy in attendance, the New York Jets, on their last day (ever) as defending Super Bowl champions would be defeated by the Kansas City Chiefs in the first round of the AFL, (not the NFL) playoffs. There were two guys in New York cooler than cool at the time. One was Walt "Clyde" Frazier and the other was Joe "Willie" Namath. Every kid in Queens loved Broadway Joe. The Jets were the talk of the PS 162 playground. The team would become a certain kind of sustained awful as my friends grew up. The spectacle and attraction of pro football in this country, even in successive years of declining popularity, remains a driver of consumer spending as autumn turns to winter. Of the 50 most highly rated television shows broadcast for the entire past year, 33 will still be pro football games. Jets fans may no longer watch the pro game, but I do understand the phenomenon.

In December, the Walt Disney Company (DIS) put together a $52 billion deal that would include assets and content from Fox's Twentieth Century Fox (FOXA) television studios. Fox made it clear that it was hanging onto its news and sports programming. In jaw-dropping news yesterday, Fox agreed to pay $3.3 billion for the NFL's Thursday Night Football package for five years. This comes out to about $660 million per season, and is a 47% increase over what rival networks had paid just this last season. Incredible.

Yes, incredible when one considers that NFL viewership overall was 10% lower this season in comparison to last, and Thursday Night viewership was actually 12% lower. One must also consider that the package only includes 11 games, and allows for those 11 games to be simulcast by the league on their own network. The deal also allows for the games to be streamed via the internet elsewhere. Either Fox thinks that the NFL's declining trend in viewership is a short-term obstacle to be easily overcome, or, even with fewer folks watching, the deal is simply worth it for the company. You do have to wonder if it really required a 47% premium to nail this thing down. Kind of reminds me of taking Jeff Lageman in the first round in 1989.

The Super Bowl to be played this Sunday between the dynastic New England Patriots and the rising Philadelphia Eagles will likely draw more than an average of 100 million viewers. Even expecting the possibility of lower ratings off of last season (the conference championship games reported an 8% decline y/y), this will be the ninth consecutive year that the big game tops that 100 million-viewers mark.

This is not just the Super Bowl for the two teams involved, nor for their fans. This is the big event for advertisers as well, and many of these advertisers have shelled out more than $5.0 million for each 30-second spot during the live broadcast. I know many folks who watch this game just for the commercials and do not care all that much about the game itself. So, just who does invest in the chance to reach so many consumers, all congregated together at one time?

Oh, just about everyone, from all walks of commerce, that's who. Some -- such as telecom giant Verizon (VZ) , or online broker E-Trade (ETFC) -- will try to plant a seed in your head. Others will try to engage a gnawing, growing consumer need, such as saving money with Groupon (GRPN) , or Intuit (INTU) with its Turbo Tax spots. Others try to make you crave.

Then there's the" hit you over the head, because I need it now" crowd. The drive for immediate gratification, also known as a walk to the fridge, or a drive to a convenience store, will be spearheaded by Anheuser-Busch InBev (BUD) , Coca-Cola (KO) , and PepsiCo (PEP) . The attempt here is to push impulse, as each of these three will spend to have every one of you craving multiple brands within their particular product line portfolios.

AB-InBev will focus on the relief efforts of Budweiser and its employees to provide clean drinking water in the wake of last year's natural disasters. No, politics will not be hot this year. Bud will also push Bud Light, Stella Artois, and Michelob Ultra at consumers. The latter of those will actually put together the concepts of responsible drinking and physical fitness. KO will advertise for its headline Coca-Cola brand, as well as bring Diet Coke back to the NFL's big game for the first time in 21 years. Twenty-one years.

Word on the street is that while BUD may or may not bring back its famous Clydesdale horses this year, PepsiCo is bringing back supermodel Cindy Crawford to recreate her famous ad from the 1992 Super Bowl. This Action Alerts PLUS charity portfolio holding is making full use of celebrity endorsement this year, as the firm has also included Peter Dinklage, Busta Rhymes, Morgan Freeman and Missy Elliot is a full minute promo for its Doritos and Mountain Dew brands. OK, I admit it, I have heard of Morgan Freeman. I Googled the other three. Still no idea, even with photos, but apparently they are famous. No offense to anyone, but if you earned your fame after the death of hair metal, I probably never heard of you.

Chart of the Day AB-InBev ... Fork in the Road

So, you're saying there's a chance. Hmm. A chance for what? Anheuser-Busch InBev (BUD)  may be the most interesting chart that I have bothered to analyze in quite some time. Money Flow looks to have just gone positive. That said, the stock suffered a death cross at the start of the year, and relative strength is non-committal.

What interests me here is the strict obedience the stock's performance has paid to 61.8% Fibonacci re-tracements in the past (successive blue Fibs), and the fact that the last sale is at one of those inflection points right now (red Fibs). If those red Fibs are to be trusted, then that puts in play the orange Pitchfork model, where the current last sale can be seen in the crook of the elbow. Now, the danger exists in this. Those red Fibs might be too small to truly be considered. If that's the case, then the green Pitchfork model takes precedence, as resistance at the upper trend line is already being adhered to. Get it? Complex, huh? Awesome is more like it. What could be more fun than figuring out something difficult while the rest of the planet sleeps?

I don't suggest that home-gamers go short equity, unless they know who they are, and they know the limits to their own tolerance for risk. A directional shot at lower prices in my opinion should be taken through the purchase of put options. Less capital intense. Lets one sleep at night. However, for the net long crowd, one purchasing shares close to the last sale of $113.50 could see their net effective cost reduced through the sale (writing) of call options against the position. Last night, you could still get $0.80 for $116 calls expiring on Feb. 23. How's a cost basis of $112.70 sound for a stock trading at $113.50? 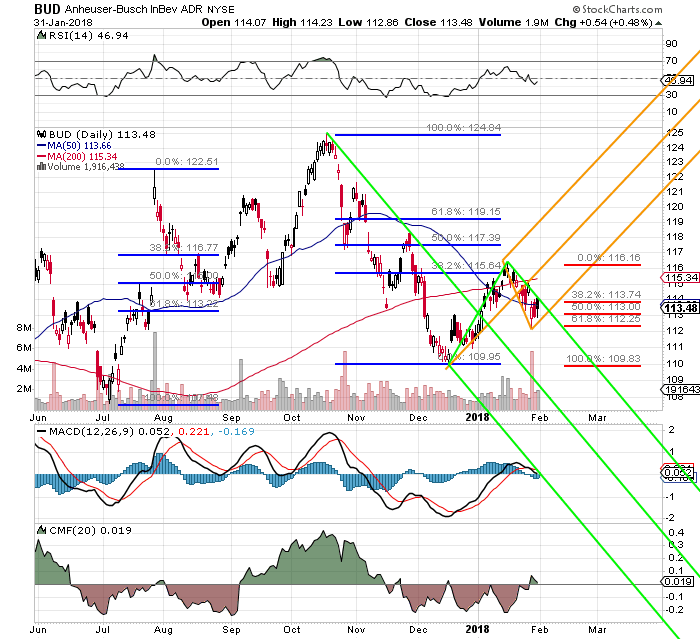 For the more adventurous crowd, $112 puts with the same expiration date closed last night at $1.37. You could (sort of) marry a put to the long. That protects you, but jacks up your cost basis to nearly $115. You could avoid the equity purchase all together and write (sell) that put. This brings in $137 per contract (at the last sale), and exposes you to the risk of paying $112 at the time of expiration, even if the shares are trading much lower. The shares go higher from here, you take the spouse out for a nice evening. You get run over, and at least you're running with an effective entry point of $110.63 for a stock you liked at $113.50. Dilly Dilly.

Get an email alert each time I write an article for Real Money. Click the "+Follow" next to my byline to this article.
TAGS: Investing | U.S. Equity | Consumer Discretionary | Consumer Staples | Markets | Economy | How-to | Options | Risk Management | Sports business | Stocks