Skyworks Solutions  (SWKS)  is set for another burst of strength to the upside as prices have made what technicians and chart watchers call a bull flag pattern.

Bull flag, you say? Sounds like voodoo, but these labels for chart patterns date back to around 1910 in a book on investments by Richard W. Schabacker, the financial editor of Forbes magazine and The New York Times back in the day. Schabacker may not have coined these names, but he is probably the first person to put them down on paper. But enough color and background -- let's take a look at the charts and indicators.

In this 12-month daily bar chart of SWKS, above, one can see a breakout from a five-month consolidation pattern, with a fairly dramatic gap to the upside last month followed by further gains. Like a runner or jogger who needs to catch his or her breadth, SWKS traded sideways last week.

A sharp move up followed by a few days of sideways to slightly lower price action is what characterizes a bull flag pattern. There is strong volume on the rally, then light volume as the market digests those gains. Another strong burst to the upside completes the pattern.

SWKS should move sharply higher again and soon. SWKS is above the rising 50- and 200-day moving averages. The On-Balance-Volume (OBV) goes up when the volume of trading is heavier on days when SWKS closes higher. The OBV line has been going up since late June and supports and confirms the price strength we have seen. The Moving Average Convergence Divergence (MACD) oscillator is a trend-following, math-driven tool that tells us that we should be trading SWKS now from the long side.

This three-year weekly chart of SWKS, above, is bullish. Prices are above the rising 40-week moving average line. The weekly OBV line is starting to move higher and the MACD oscillator has been above the zero line (bullish) since September. Prices could retest the $100 to $110 area, but let's see if there is a more bullish story from a Point and Figure chart, below. 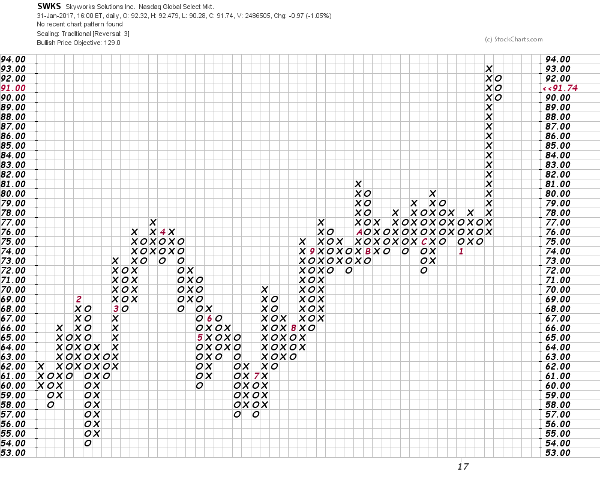 Bottom line: SWKS looks ready to break out on the upside again. I would buy it now and add on strength. A sell-stop below $87 would be how I would control the risk if my forecast doesn't work out according to my script.