Dollar General (DG) may need to have its Board vote on a name change -- as a weak chart picture could force a devaluation. Maybe "80 Cents General?" Or perhaps "Dollar Major?" Let's look at the charts and indicators.

In this daily chart of DG, below, we can see with hindsight a June/July/August top, followed by a severe decline from $96 down to nearly $66 in a couple of months. Not pretty. November saw and upside bounce, but those gains have been eroded. Slowly, but still eroded. DG is trading below its declining, 50-day and 200-day moving average lines.

The On-Balance-Volume (OBV) has been declining since last August -- and signals more-aggressive selling, as the volume of trading has been heavier for DG on days that it has closed lower. Heavy volume on a down day tells me that investors want "out."

This weekly chart of DG, below, is pointed lower. Prices are below the declining, 40-week moving average line. The weekly OBV line has weakened for the past seven months and implies a significant amount of distribution. The MACD oscillator in the lower panel is bearish. 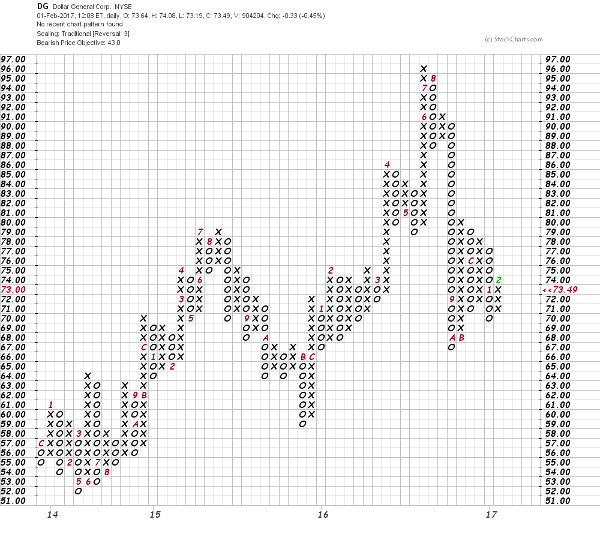 This Point and Figure chart of DG, above, shows a consolidation pattern with three up columns of Xs and three down columns of Os. A decline to $69 should break the decline and could open up the way for a deeper selloff to $43.