On the eve of Amazon's (AMZN) earnings Thursday and in light of all of the hoopla surrounding Walmart's (WMT) new free two-day shipping program, it's important to keep one thing in mind about the e-commerce giant.

The company is still flat-out dominating the world of retail, irrespective of efforts by old school, bricks-and-mortar retailers, to spruce up their stores and mobile experiences. Want a simple reason for Macy's (M) , Sears Holdings (SHLD) and others announcing sweeping store closures? Largely it's because of Amazon's increasingly long tentacles into our daily lives. And that's something nicely captured in data TheStreet received from the fine folks at Slice Intelligence.

Amazon, which is a holding of the Growth Seeker portfolio, accounted for an astounding 53% of all U.S. e-commerce sales growth in 2016, notes Slice Intelligence; quite impressive, in the sense that e-commerce is likely to still only account for 10% of consumer spending.

A sizable portion of the growth (18%) is coming from electronics, fueled of course by digital assistant Echo (which is making Amazon even more part of people's lives), and to a lesser extent by health and beauty products. At the core of the growth is Amazon's fast and easy shipping process and the fact that Prime continues to attract new users -- Slice estimates that the average Amazon package was delivered in 3.4 days this past December, compared to 5.6 days for everyone else.

And that gap stands to get wider as Amazon ventures further into building out its logistics network to relieve bottlenecks at key partner (UPS)   (UPS) .

Amazon revealed Tuesday that it plans to spend $1.49 billion to build its first worldwide air cargo hub at the Cincinnati/Northern Kentucky Airport in Hebron, Kentucky. The project, covering about 900 acres around the airport, would be the largest-ever single investment by any company in Northern Kentucky, Cincinnati.com reported. Last year, Amazon signed deals with two carriers to lease 40 Prime Air cargo planes to ship its packages around the United States. Right now, 16 of those Prime Air planes are in operation, with more coming online over time.

"There is no doubt that Amazon is hitting on all cylinders. From delivery drones to Alexa devices, Amazon's commitment to innovation is helping the company maintain its e-commerce dominance. The big question in 2017 will be whether Amazon can continue to execute well online at the same time that it embarks on its biggest challenge yet, imagining and building the store of the future," said Ken Cassar, Slice Intelligence's Principal Analyst.

It's hard to imagine Amazon doesn't increasingly dominate this year, which would send its stock bursting through the 52-week high of $847 hit on Oct. 6.

To all the Apple (AAPL) haters out there saying the company's best days are over, here's a simple chart to digest. It offers up at least two observations.

First, while the latest suite of iPhones may not be revolutionary, they are doing their part to trigger upgrades by existing users while attracting new users -- Apple just sold the most iPhones in one single quarter ever. That doesn't happen if the product sucks -- ask Blackberry (BBRY) or Microsoft (MSFT) about what happens if you make crappy smartphones. The takeaway here is that yes, Apple is still producing things at high price points that people around the world see a need to buy.

Secondarily, Apple remains an investment for the long-term. Sure, the tech king may miss analyst iPhone estimates for a given quarter -- and the stock dives -- but over time Apple has proven that the long-term trend for its most important product is higher. To be sure, the trend could soon be juiced if Apple releases a revolutionary iPhone 8 to mark the product's 10-year anniversary.

Apple is a holding in Jim Cramer's Action Alerts PLUS Charitable Trust Portfolio. Want to be alerted before Cramer buys or sells AAPL? Learn more now. 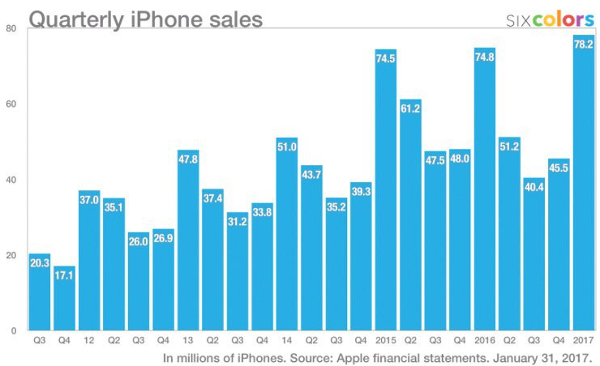 Get an email alert each time I write an article for Real Money. Click the "+Follow" next to my byline to this article.
TAGS: Investing | U.S. Equity | Consumer Discretionary | Consumer Staples | Earnings | Markets | Consumer | Economy | How-to | E-Commerce | Risk Management | Stocks

After a Wedding Dress Chuckle, a Return to Sobering Reality

The news out of the mortgage markets and cruise line business offers nothing to laugh about.

My Plan for Disney

My thoughts on the shares of DIS are this... Right here? I sit on my hands. Still, here's a trade idea.

A Pair Trade Is Shaping Up in the Fitness Realm

With people shut out of gyms and many now working out at home due to the coronavirus, the trade is to short Planet Fitness and go long Peloton.