Fresh off Tuesday night's State of the Union speech, the iShares Global Infrastructure ETF with the symbol (IGF) could be one way of participating in greater spending on infrastructure -- whether to the tune of $1.5 trillion in President Trump's agenda or a bigger global amount. Stock prices are likely to move up ahead of any legislation.

In this daily bar chart of IGF, below, we can see that the ETF's price has traded sideways since late July. Dips into the $45.00 -$44.50 area have been bought and prices have not been able to stay above $46.50 for long. IGF has crossed above and below the 50-day simple moving average line many times over the past six months. IGF tested the rising 200-day moving average line in late December and early January. IGF could test the 200-day line again but my (not very scientific) gut tells me we are probably going to move higher first.

The On-Balance-Volume (OBV) was pretty flat last year but it has turned higher since late November and points to a possible upside breakout. The Moving Average Convergence Divergence (MACD) oscillator has been trading around the zero line but further price strength in IGF would likely turn the MACD oscillator higher.

In this weekly bar chart of IGF, below, we used five years of price data to get a bigger picture of this ETF. Prices have been in a rally phase the past two years. IGF is above the rising 40-week moving average line and has successfully tested the line the past two months. The weekly OBV line has moved sideways since May but is close to making a new high. The weekly MACD oscillator has been in a take profits mode since October but could turn up soon for a fresh outright go long signal. 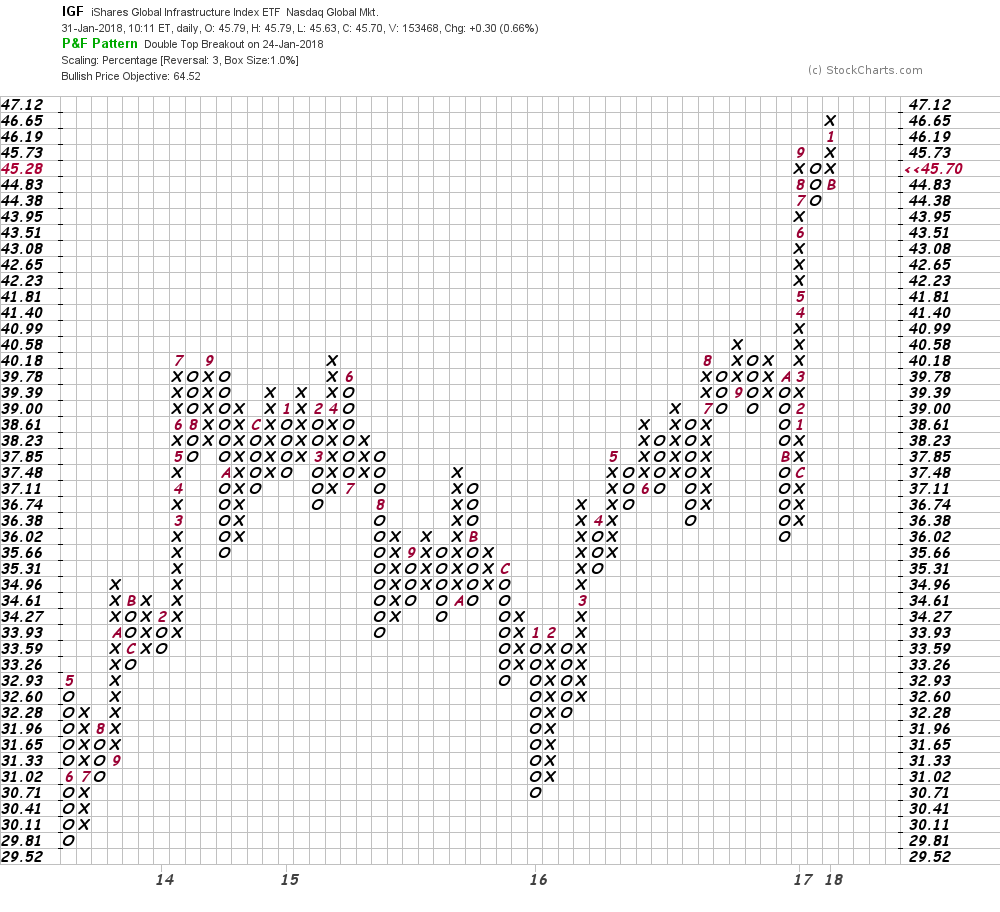 Bottom line: IGF looks like it wants to breakout above its sideways consolidation pattern. Aggressive traders could go long on a close above $46.50 and investors could go long around current levels. Stops should be below $44.50 for now. The mid-$60's is our longer-term price target.

Get an email alert each time I write an article for Real Money. Click the "+Follow" next to my byline to this article.
TAGS: Investing | U.S. Equity | Regulation | Markets | Industrials | Basic Materials | ETFs | Funds | How-to | Politics | Stocks

Here's how low the stock could go.

Chemical Maker LSB Industries Gets an Upgrade: Here's How to Trade It

Let's check the charts for the 'right mix.'

The Path for UiPath Could Be Headed Toward Single Digits

The shares are plunging after reduced guidance.

Put this one on your 'market minder' to watch.

3M Seems Glued to the Lows

Shares of MMM are getting stuck, according to the charts.