"I rewrote the ending to 'Farewell to Arms,' the last page of it, thirty-nine times before I was satisfied." -- Earnest Hemingway

I had been critical of ultra-loose monetary policy in its early days. I don't like the DH Rule in baseball, and have never been comfortable with the perversion of free markets in real life. Sometimes, I think that my criticism was spot on, other times ... not so much. Janet Yellen leaves the Federal Reserve Bank this Saturday, making today's FOMC policy announcement her very last. Yellen, whom I have often referred to as the Doctor, has spent the last 14 years at the nation's central bank, including the last four as its chair. As chair, she did not have to deal with a recession, though that is at least partially due to her own caution in unwinding the monetary policies put in place while her predecessor ran the show. Yellen did have a front row seat and supporting role as vice-chair while that predecessor was putting on display, his "courage to act." Yellen, for all of her caution, was plenty brave as well, and I mean that as a compliment at this point in the game.

I have known many brave people. Most do not tell you how brave they are. Yellen, quite honestly, and to her credit, told us late in her term that she was having trouble understanding labor markets and consumer level inflation in the modern era. In other words, as a career labor economist, she seemed perplexed that the Phillips Curve did not quite work out the way it was supposed to. I want you to take a second -- and though I admit to writing about that in a negative way at the time -- respect the kind of moral and ethical courage, as well as personal confidence that it took to say that. One could not be faulted for swinging and missing on the impact of e-commerce on consumer level inflation, as well as on wages. I once told a national TV audience (perhaps after QE2 had been launched) that they could likely prepare to pay $7 for a loaf of bread. I would bet nobody remembers what I said. As Fed Chair, more specifically as a female Fed Chair, everything she said was under the microscope, and ripe for comparison.

How did Janet Yellen do? My fellow Austrians (I am an Irish-Catholic kid from Queens) will not like this, but her grace in the process of departure, as well as her progress in reaching her goals leaves me with some deep respect as she rides into the sunset. Her primary goal was to tighten the labor markets. Well, there may be some folks still on the sidelines (62.7% participation), but with two millennial children in the labor force, I know that entry level employment is far easier to land now than at any point since the great recession. We have a way to go on wages, and inflation, but those arenas are, as we already mentioned, far trickier now than ever before. That Curve might look more like a stick in the modern era.

To the doctor's credit, the United States was perhaps the first major economy to withdraw from outright quantitative easing, and has now even begun the process of slowing down the reinvestment of maturing assets held on the balance sheet. We still have to see how that plays out as liquidity starts moving the other way this spring. We'll also have to see how wages (mired at growth of about 2.5%), and core inflation (stuck at 1.8%) play out. The ending of this story, however, will be the start of someone else's tale. This will be the hand that Jerome Powell is dealt. We have no choice but to wish him well.

You remember the Hydra? The second of the labors of Hercules in ancient Greek mythology. For those of you who don't, that Hydra was a many-headed monster that grew two heads in the place of each one that was cut off. There was a central, immortal head that when lopped off and buried, allowed Hercules to defeat that beast. Is the health care sector up against a hydra? If so, who is the central, most important head? You have heard from Amazon's (AMZN) , Jeff Bezos, the slayer of industries. You heard from Berkshire Hathaway's (BRK.A) , Warren Buffett, the sage of American business. You have also heard from Action Alerts PLUS charity portfolio holding JP Morgan's (JPM) Jamie Dimon, America's Banker. The three rattled more than a few cages when they announced plans to form a company "free from profit-making incentives and constraint" that would ultimately provide lower health care costs to employees of the three firms.

Perhaps it is the other way around. Perhaps, the slayers of monsters are these three titans of the U.S. economy and the heads being lopped off are biotechs, health care equipment manufacturers, health care providers, and Big Pharma. Who, out there in the health care sector, is safe? Houston, we have a problem. The Health Care Select Sector SPDR ETF (XLV) took a punch to the ribs yesterday to the tune of 2.1%. Cigna (CI) led all of the entire fund's holdings lower with a 7% beat-down. That firm, along with Unitedhealth Group (UNH) (-4.3%) provide health insurance coverage for JP Morgan employees. CVS Health (CVS) provides pharmacy benefits to JP Morgan. CVS was quoted in the Wall Street Journal as saying: "We welcome the opportunity to work with all market participants towards the goal of better health outcomes at lower costs." Hmm, I bet they do. You did hear the president last night? Infrastructure. Huzzah. Defense spending. Huzzah. Drug prices? Uh oh. Big Pharma, and those that sell Big Pharma's products, have a problem, and public perception will not be on their side. Perhaps, the move that CVS made on Aetna (AET) wasn't so crazy after all.

Chart of the Day: CVS Health

One thing we have to understand is that while the entire equity market had gone somewhat parabolic in mid-to-late January, health care had gone even more so. The sector was ripe for some rotation, even if the three amigos had not started landing kidney punches yesterday. It's plain to see on this chart of CVS Health (CVS) that the stock was overbought; the 12 and 26-day exponential moving averages have simply galloped out in front of the nine-day EMA. On top of that, positive money flow of late exacerbated a move that had started even while that flow was still negative.

I have no position in this name, nor do I intend to initiate one. What to do if you indeed are wearing this position on your sleeve, and suddenly realize that you were sucker punched yesterday? The possible good news is that though the lower trend line of the Pitchfork was tested yesterday, that line has not yet been truly broken. There is no scandal here, and the business is not immediately threatened. If $80 support cracks, you still have Fan support just below $78, and then again just above $75. 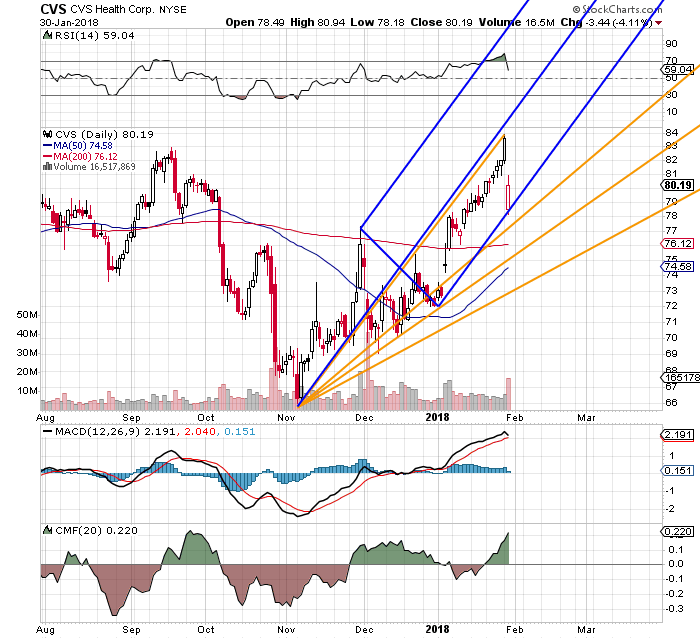 I don't think you need to throw your entire position overboard at one time. That said, I think if it were me, that I would start working my way out of these on any pops that might come my way. One can start by covering the position by writing something against the equity. The March 16 $82.50 calls went out last night at $2.07. That ain't so bad, gang.

Get an email alert each time I write an article for Real Money. Click the "+Follow" next to my byline to this article.
TAGS: Investing | U.S. Equity | Financial Services | Healthcare | Technology | Markets | Economy | How-to | E-Commerce | Options | Politics | Risk Management | Stocks