United Continental Holdings (UAL) has pulled back in recent days to retest nearby support. Prices could hold here and then rally again or we could have some additional price weakness. It is a little "touch and go" so let's look at the charts and indicators.

In this daily bar chart of UAL, below, we can see how UAL stalled at $70 at the end of November and the beginning of December. In early January, UAL pulled back to the $70 level again followed by another rally. In recent days UAL has dipped below the rising 50-day moving average line as it once again tests the $70 level.

By its actions and reactions the $70 level has become support. Prices may hold here and rally again or we could slide to around $65 or so. Tough call right now. UAL remains above the rising 200-day moving average line.

The On-Balance-Volume (OBV) has been rising since may and tells us that buyers have been aggressive. While momentum has slowed since November, this indicator doesn't suggest a decline.

In this three-year weekly chart, below, we can see that UAL has made a strong move above the rising 40-week moving average line. The OBV line on this timeframe is bullish and we can see that it made a new high for the move up. The Moving Average Convergence Divergence (MACD) oscillator is still bullish but as the rally has stalled the two moving averages of the indicator have begun to narrow toward a possible crossover.

In this Point and Figure chart of UAL, below, we can see how the $70 level has held. A trade at $69.00 or lower will tip the chart to the bear side. If $70 holds, then I would look for a slow grind back to the upside. A trade at $77 would be an important upside breakout. 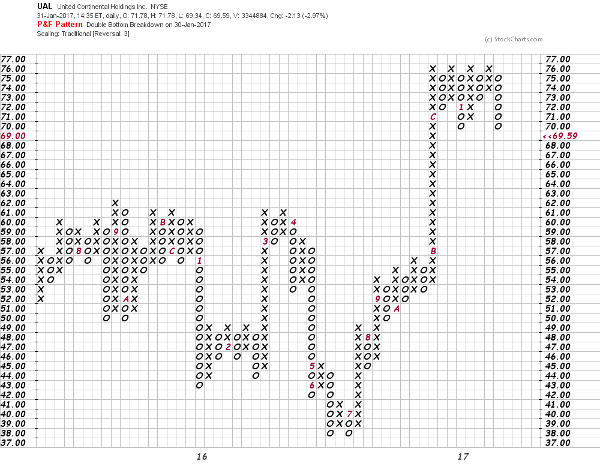 Go Full Steam Ahead on CSX

The rails, and other industrial-tied names are a little too cheap now.

Has the Classic Vroom of Harley-Davidson Returned to the Stock?

Let's check out the charts and indicators ahead of earnings.

The rail name looks like it could break out soon to new highs, according to the charts and indicators.