While Silicon Valley CEOs were up in arms against President Donald Trump's travel ban for citizens of seven countries, the silence was deafening in the corner of the big biotech companies, our political correspondent Adam Feuerstein wrote in a recent article. Still, some of the the smaller firms in the sector came out against the ban.

Nick Leschly, President & CEO of bluebird bio (BLUE) said, according to the article: "Disease knows no boundaries. We as a country and the U.S. life sciences sector specifically need more good scientists to continue to advance medical innovation and new discoveries for patients around the globe. We at Bluebird Bio emphatically support and celebrate a diverse population. We oppose any policies that inhibit our ability to attract and retain the best and brightest scientific and business minds from all over the world."

The company has been doing well, and the charts show its stock is about to fly, s our favorite technical indicators are getting set for an upside breakout.

In this one-year daily bar chart of BLUE, above, we can see two different price patterns. On the left side of the chart, BLUE is trading sideways in a relatively narrow range between $35 and $55. In August, the pattern changes. Prices are still in a mostly sideways pattern from August, but the up and down range spans $45 dollars. Volume is heavier. Prices are now above the rising 50-day moving average line and the rising 200-day moving average line.

There is more "action" in the On-Balance-Volume (OBV) line, indicating more aggressive buying. Last, the Moving Average Convergence Divergence (MACD) oscillator is above the zero line most of the time since August.

In this three-year weekly chart of BLUE, above, try not to focus on the big rally and decline. Pay more attention to the past year. Prices are now above the rising 40-week moving average line. The weekly OBV line has been stable and the weekly MACD oscillator is above the zero line (bullish). 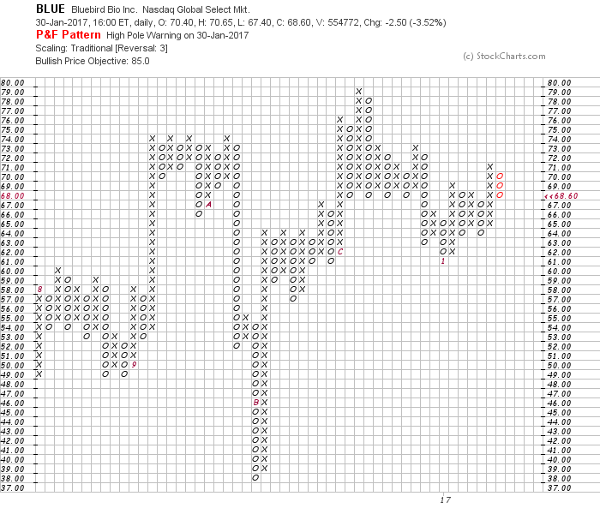 This Point and Figure chart presents the price action in a different way. Here you can see that a trade at $72 will be a breakout for BLUE and yield us a potential initial price target of $85.