Alaska Air Group (ALK) has rallied from a June low to new highs and the path is still pointed north.

In this one-year daily chart of ALK, below, we see a number of uptrends. There is one short uptrend at the beginning of 2016 followed by a leg lower. From late June there is an uptrend to the end of October where prices move gradually higher. From early November until now there is a sharper uptrend. Prices are above the rising 50-day moving average line and the rising 200-day moving average.

Volume is a little heavier in June and July around the low but it is unremarkable the rest of the time. Thank goodness the On-Balance-Volume (OBV) line rises to confirm the advance. Momentum is slowing from November to January but this divergence may not result in much of a pullback.

In this three-year weekly chart of ALK, below, we can see that prices broke out of a broad sideways pattern around $85. ALK is above the rising 40-week moving average line. The weekly OBV line shows a strong uptrend and the kind of accumulation or aggressive buying we like to see to maintain a healthy uptrend.

This Point and Figure chart of ALK, below, shows the breakout around $85 and the breakout at $92. The next possible upside price objective for ALK using the measuring technique for this kind of chart yields a target of $114. 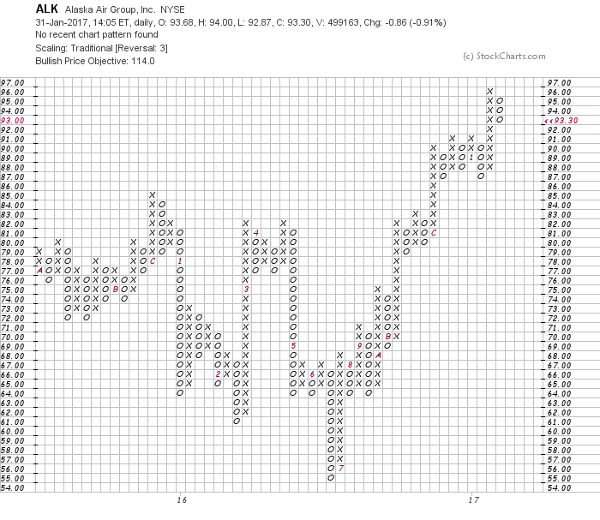 ChargePoint Could Bounce, but Is That Enough Juice for Investors?

Let's check on the charts of this company building out an EV charging network.

2 'Off the Radar' Names to Consider

Insiders have been adding to their stakes in Greenbrier Cos and Ring Energy.

Flight Plans for Southwest Airlines Are Up in the Air

The shares have been on a downward path since early April.