"Leadership is the sum of those qualities of intellect, human understanding, and moral character that enables a person to inspire and control a group of people successfully."

Once upon a time in this country, folks used to take a spoonful of castor oil every morning. Why? Because it was considered to be "good for you." For that very same reason, you might actually be grateful that stocks took one on the jaw on Monday. You might even be glad that equity index futures are trading well below fair value Tuesday morning, as this selloff (which really is not so great) reaches around the globe. The truth is that equity markets needed to move sideways or even lower just to have the ability to again move higher. This condition may or may not last very long. However, this all unfolds. There is no need to fear, my young friends. For whatever develops, we will adapt to, and we will defeat. That's what we do.

Equity markets take a break, as bonds sell off on the back of those comments made over the weekend by the European Central Bank's Klaas Knot. This forces competition to some degree between the long end of the U.S. Treasury yield curve and sectors such as utilities, telecom and REITs. Makes sense. We all know that Knot was speaking the truth. Traders are concerned about demand for Apple's (AAPL) latest iPhone offerings. I may own some shares. That's a play on the company's ecosystem, but, you know what, I'm not shelling out a grand for a cell phone. Apple, by the way, is also a holding in Action Alerts PLUS, which Jim Cramer co-manages as a charitable trust.

Did they think we were stupid? Hope not. On top of that, WTI crude has started to waver as the U.S. dollar has started to show some strength. Worried yet? Not yet. The gateway for oil is still $64. That spot may need to be tested from above. As of zero dark thirty this morning, the commodity still held above $65, which is pretty. Means less to me than $64.

I know it's tough. You would like to buy the pullbacks, but these prices are so far above your cost basis that you feel handcuffed. You could sell (write) call options against your holdings in names where you see respectable time premium. That's always an idea. You could also see how the rest of the week plays out. Plenty of earnings on tap. Most of them will likely beat expectations. I said likely -- no promises. Some of them may even raise guidance. I would actually like to see a little more price erosion before we get back on the horse. I welcome it, even. Might make the chart look, well ... a little more like a chart is supposed to.

Remember gang, as long as you're healthy, as long as you've got something to eat, access to clean water, and a reliable source of heat, then just what the heck are you worried about?

Shares of MetLife (MET) took a nasty tumble in overnight trading. The firm, originally scheduled to release its fourth-quarter numbers tomorrow, has postponed that event until Feb. 13, with an earnings call on tap for the next day. What gives? Apparently, the firm will expect to set aside reserves of $525 million to $575 million pretax, and will also revise previously released financial results.

Back in December, MET announced that it was reviewing its own procedures tied to some Retirement and Income Solutions group annuitants. MetLife made known that the firm is responding to inquiries from the Securities and Exchange Commission, as well as the New York Department of Financial Services.

The firm did release unaudited preliminary fourth-quarter results. Those numbers missed expectations badly. I am not going to try to tell where to catch this one. I'm not even going to try myself. For those of you who do own the shares, I want you to be cognizant of just how dangerous the $50 level might be.

The stock is trading around $50.75 in the early morning session. As the story unfolds, that $50 level could come under pressure, and a crack there allows for movement as low as 46 clams, so protect yourself: 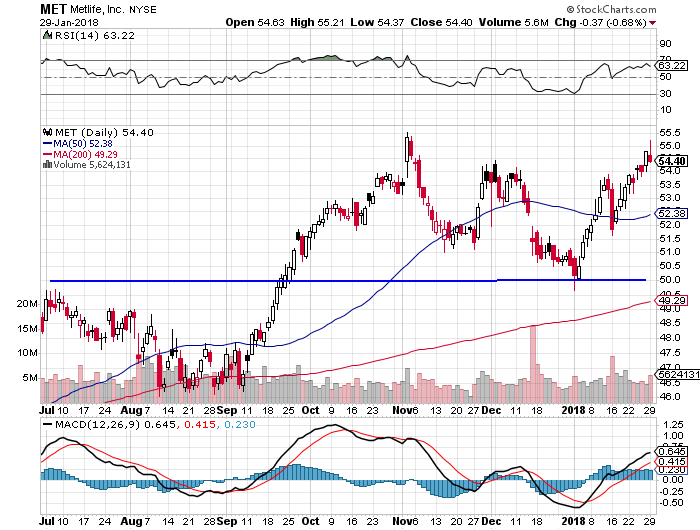 State of The Union

The media will be all over the State of The Union address today. Each outlet has their own agenda which will color their point of view. We will hear a lot how well the economy and the stock market are doing. We will hear about tax cuts. You can bet your tail that we will hear about immigration, and how there will be a bipartisan solution there. Free trade? He'll go there, especially after his well-received performance in Davos. Fair trade is the term that will be used tonight.

There are two areas on which I am looking for direction tonight in particular. Infrastructure and defense. We touched on the potential for an infrastructure build last week. I gave you my two plays there -- United Rentals (URI) and U.S. Concrete (USCR) . URI has come in on some profit taking since, by the way, despite those excellent earnings last Wednesday.

Now, defense is important, and regardless of how much the president touches on it tonight, I think that I need a certain level of exposure to the space. President Trump is expected to propose a $716 billion increase in defense spending in fiscal year 2019. That would be a 7% pop from proposed, but still not passed 2018 spending. You kids see Lockheed Martin's (LMT) results? Revenue was +10.1% y/y. By segment, missiles and fire control gained 31%, far more than any other slice of the firm's revenue. Now, check out Raytheon (RTN) . Revenue increased by 8% y/y for those guys. Missile systems scores a 15% gain. Again, far larger than any other segment.

You know what they use missiles for? Well, a lot of things, actually, but the ramp here could be in preparation for having to repel hostile fire. Without naming names, you know where this is heading. Reconnaissance is key. So is fire control. What could be more important to such fine tuning than unmanned drones? Now you know what I'm thinking, don't you? Kratos Defense (KTOS) , my old friend may be rising off of the mat, and is still cheap enough in dollar terms for the home-gamers to play along.

Now, keep in mind that due to the partially classified nature of these releases that many details are left incomplete, but the fact is that this firm is doing some business of late. Just in the last six weeks alone:

Chart of the Day: Kratos Defense

Check out this chart. In late November, the daily moving average convergence divergence (MACD) turns positive after a lengthy slumber. As the new year turns, the same is true for money flow. Relative Strength? Not even in the ballpark of overbought territory. This stock had a rough autumn. Is it finally waking up? I've traded in and out of the name, but I've always been a fan, and have not been completely flat in eons.

Now, look at the Fibs, gang. Wow! Precision. Both the orange and the smaller, more recent blue Fibonaccis display a 61.8% pullback after the name runs, almost like clockwork. Now, when the worm turns against you ... you'll know where the cavalry is. See the pitchfork pattern below? The stock is hugging the lower trend line: 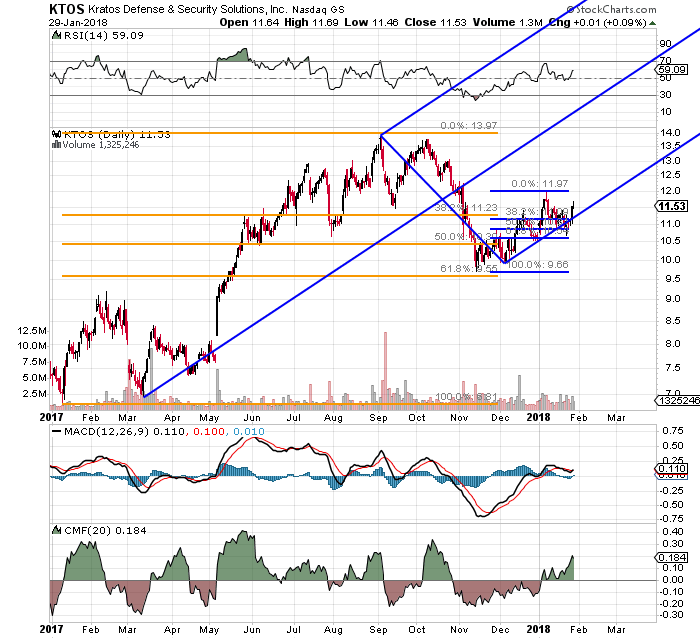 Could the share price see support rise toward $13 by the time spring rolls around? Yeah, I think so. I would love to see resistance retest that glorious $14 level, but let's not get greedy. Fact is this. The president wants to spend more dough on defense. The military is apparently quite comfortable going to these guys for solutions. KTOS sell something useful that not everyone else can. After you all have had the chance to read and absorb this article, I will add to my personal long position in this name. A lot of talking heads give you that? So there.

Get an email alert each time I write an article for Real Money. Click the "+Follow" next to my byline to this article.
TAGS: Investing | U.S. Equity | Transportation | Technology | Industrials | Energy | Markets | Economy | How-to | Politics | Risk Management | Stocks