One thing the FOMC knows is the behavior of its depositors, and its depositors have been decelerating their pace of lending in the past several months, in absolute terms and relative to growth in the nominal economy. Real disposable income grew at a slower pace in 2016 than it did in 2015 and 2014. Putting the two together, it is better to say the demand for loans has slowed, given how banks have more than adequate assets to accelerate growth in their loan books.

With less borrowing as a backdrop, the data coming out this week, most important the employment data on Friday morning, should reflect a slower pace of growth. The Fed, however, will nevertheless indicate how policy is on track for several more tightenings in the coming year. Barring a major collapse in equities or some key economic variables (neither is anticipated), the Fed will raise policy rates another 25 basis points in March. Given the slowdown in growth and borrowing pointing to lower core inflation rates in the year ahead, is Trump the only reason for the FOMC to raise rates?

The slowdown in commercial bank lending versus GDP is illustrated in the chart below. When borrowing was running six percentage points ahead of nominal GDP growth, the case could be made that the economy was starting to run hot. What occurred is that firms found themselves sitting with unwanted inventory, now they aren't and the spread to GDP growth has narrowed. Bank loans relative to assets are still well below normal if we count the excess reserves on deposit at the Fed -- if you don't, bank behavior is fairly normal. Easing back of the regulatory environment could unleash some of this excess cash, but let's wait to see what easing is enacted. 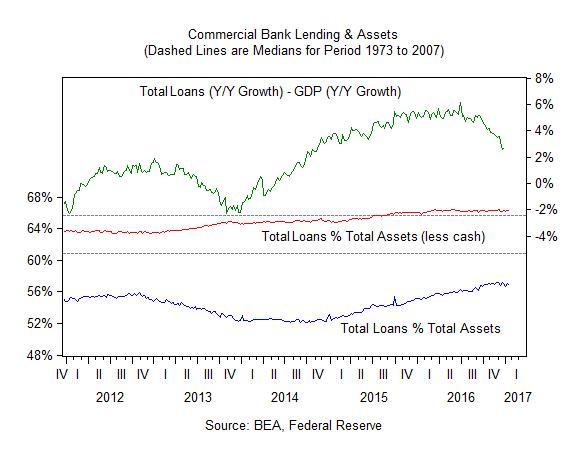 The drop in bank borrowing is evident in more dramatic fashion when looking at the three-month rate of change of the four-week moving average. 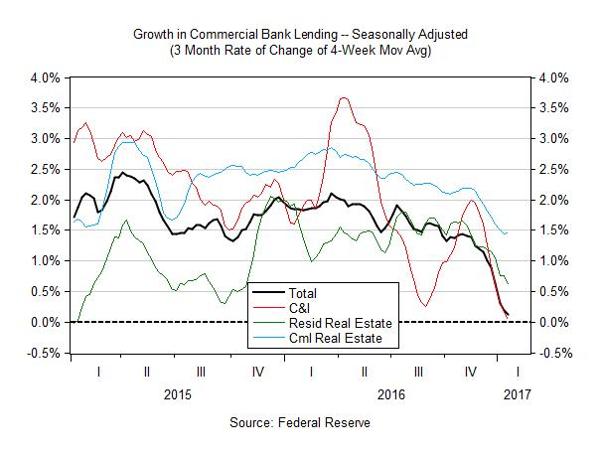 We could, perhaps, excuse some of the drop-off in borrowing growth as a combination of smaller inventories being carried and interest rates rising prior to the stimulus promised by the Trump administration. There is also the real-economy fact that real disposable income increased 2.1% in 2016 compared with 3% in 2015 and 4.7% in 2014 (see chart below). One can say this is growth regressing to the mean, to the economy's underlying potential, but that begs the question of inflation risk going forward and whether markedly higher policy rates are even necessary. 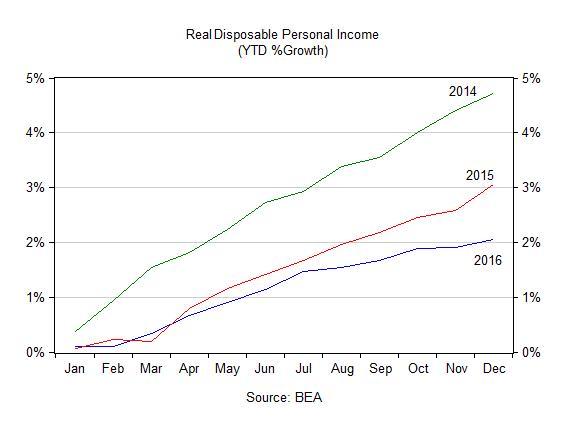 Fed Chair Janet Yellen backs away from the need to tighten a lot in her comments, but also recognizes the coming tax cuts and spending increases and doesn't want to have to play catch-up with that. What we surmise from the combination of slower borrowing and growth is that the confluence of Trumpian ideas hitting the economy has increased uncertainty. When firms can't quite figure the world in which they will operate, they spend less and borrow less. This could be a pause. The chief determinant of how long lies with the administration.

Get an email alert each time I write an article for Real Money. Click the "+Follow" next to my byline to this article.
TAGS: Financial Services | Investing | Economic Data | Economy

PagSeguro Digital Is Definitely a Weekly Chart to Watch, but Here's the Rub

If you don't have a strong gut, this may not be the week to trade.

Let's Go 'BAC' to the Banks

Last-Minute Ant IPO Suspension Is a Communist Show of Strength

Despite gaining regulatory approval, it's a message to management that it only operates at the behest of the Communist Party.