"The thing most people don't understand is that pitching isn't the same every time out." -- Tom Seaver

Shares of Wynn Resorts went into all-out whack-a-mole (any bid), beat-down mode on Friday, a day that saw equity markets roar. All 11 sectors closed in the green on a day when it seemed traders were rotating out of one troubled name and into everything else. The way the game plays out today will likely change for the broader markets. Yields are screaming higher, which could have the effect of finally pushing equity prices sideways or even lower. Could anyone argue with lower at this point? It is starting to feel like we may have to pay for this January to remember at some point. I was in the thick of it in October of 1987. Never will forget that feeling.

Treasury yields might be our lead story today, but the week ahead is just packed with potentially market moving macro-economic events such as today's PCE data, Thursday's manufacturing ISM survey -- and then, Friday is "Jobs Day" again. Again? Yes, again. Where the time goes, I have no idea. If the macro is not enough to make your little heart skip a beat, then the quarterly earnings releases will surely be enough to get you there. This week, of the 500 names that comprise the U.S. equity market's broadest headline index, 141 will lay their numbers out for you, including Boeing (BA) , Alibaba (BABA) , Action Alerts PLUS charity portfolio holdings Alphabet (GOOGL) and Apple (AAPL) , just to name a few. So far, a rough 78% of already reported U.S. companies have beaten EPS expectations to the upside, on revenues that are up 8.1% year to date. That number, if it were to hold, is also well above market expectations coming into the season.

You thought a plate full of macro and a boatload of earnings were enough to contend with? Think again. While you're at it, buckle your chinstrap and keep your flak jacket on. Policy and politics will put their stamp on the marketplace as the week progresses as well. Not only will markets absorb President Trump's first true "State of the Union" address on Tuesday night, but Fed Chair Janet Yellen's last FOMC meeting as well, on Wednesday afternoon. While the president's speech will likely be seen as a positive, particularly for certain sectors, Yellen's departure could provoke some profit taking, as her performance has been seen as generally good for equity markets.

So, you ask: why are yields flying? Why are bonds so weak this morning? You don't have to look very far. The European Central Bank was fairly clear last week. The plan is to continue buying at least 30 billion euros a month worth of assets, as their quantitative easing program "winds down". ECB President Mario Draghi has been non-committal toward that end, and has indicated that interest rates will remain at accommodative levels well beyond the end of this program. Enter ECB Governing Council member Klaas Knot.

Over the weekend, Knot, who also heads De Nederlandsche Bank (Dutch Central Bank) said "The program has done what could realistically be expected of it." While Draghi has been preaching patience on policy, Knot added: "The program is fixed until September, we don't have to communicate yet that it will be over after September, but I think that's where we're headed." Gotcha.

Yields have worked their way higher elsewhere, but that move is being felt in more extreme measure here in the U.S. U.S. Treasury borrowing costs have benefited from a foreign search for yield, despite a central bank that is well into a tightening cycle, a weakening home currency, and a fiscal policy that appears to be headed down the road toward much higher deficits. Thar be squalls ahead.

Now for the story of Wynn Resorts. One week ago today, WYNN reported fourth-quarter earnings of $1.40 per share. That was a two penny beat. Revenue for the quarter came in at $1.69 billion. That beat expectations by $120 million, and was up an astounding 30% year over year. Huzzah. The share price gapped much higher last Monday, and batted around between $200 and $203 all week until around Noon on Friday. The shares collapsed by more than 10% (a $1.9 billion kidney punch) on the day in just those four hours.

What happened? Media reports that pointed allegations of sexual misconduct at chief executive Steve Wynn, who also happens to have founded the company, spread quickly. In overnight trading, not only were shares of WYNN trading lower still (-4% close to 7 am ET), but shares of subordinate firm Wynn Macau were roughly 6.5% lower in Hong Kong trading as well.

Wynn Resorts has launched its own investigation into these claims. Mr. Wynn, while resigning his post as Republican National Committee Finance Chair has denied the allegations, terming them "preposterous". The story that broke in The Wall Street Journal states that Wynn owns roughly 12% of the firm and "is considered integral to its success". On top of that, The Rosen Law Firm announced over the weekend that it was investigating potential breaches of fiduciary responsibility by WYNN's management. Is the stock now toxic? What if you are still long the name? Let's take a look.

Chart of the Day: Wynn Resorts

While the performance of firms trying to navigate their way around difficult headlines may be almost impossible to predict, the good news for this one, is that technically speaking, Wynn Resorts (WYNN) is not yet truly broken, if you can believe it.

Not to say that the name is out of the woods, far from it; but if you bought the stock before last week, you probably should look to extract at least part of the position, if you have not already, while your P/L ratio still sports a P. For the short-timers, you might want to purchase some protection. I don't like that idea either, but in this case, unless you decide to lighten up, it may be prudent.

Trading volumes were enormous for the name on Friday. Does that mean that the blood is out? You really can't know that. To try to figure out where one might stand on this one, we'll start our models with the August selloff and run it right through Friday. The Pitchfork tells us that the lower trend line remains intact. The chart gets busy here, so stay focused. With the name lower this morning, the 38.2% Fibonacci re-tracement level becomes key. Should the stock remain above that spot and above that lower trend line, then the overall trend could remain unbroken. 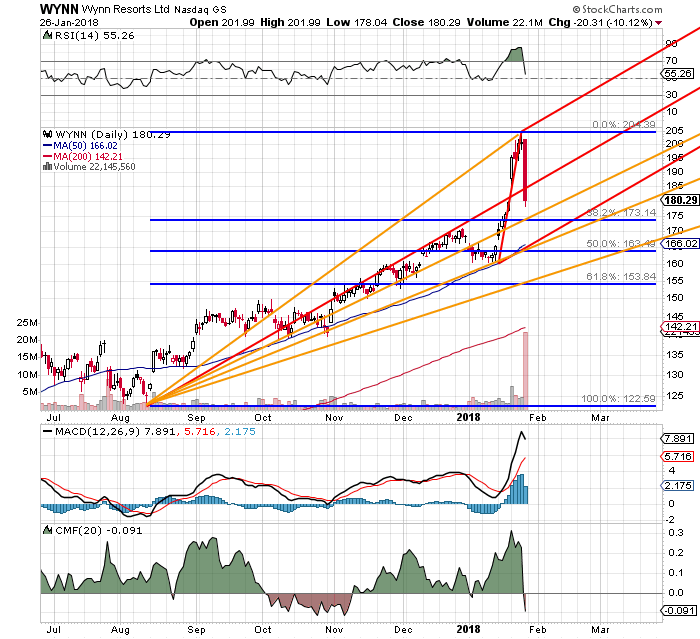 That will make the fan lines (orange) all the more important as time stretches through February and March. I would not call this positive by any stretch. I'll just say that if you own the name, you still have a fighting chance to extract yourself somewhat gracefully. For the volatility players, straddles going out three weeks bearing strike prices close to the last sale closed at $15 and change on Friday. These might be worth a look after they open today.

Get an email alert each time I write an article for Real Money. Click the "+Follow" next to my byline to this article.
TAGS: Investing | U.S. Equity | Consumer Discretionary | Industrials | Economic Data | Earnings | Markets | Economy | How-to | Gaming | Risk Management | Stocks