MGM Resorts Int'l. (MGM) has not been reviewed since June of 2016 when I wrote, "The weekly MACD oscillator is also bullish -- rising, and above the zero line -- telling us to trade from the long side. From here, MGM could retest the highs of 2014 in the $28 to $29 area. A strong close above $28 will be a breakout on a Point and Figure chart and give us price targets in the upper $30s. Risk a close back below $23." Looking back over the past 18-months or so we can see in the weekly chart (second chart, below) that our forecast played out nicely. Let's see what we should be doing now.

In this daily bar chart of MGM, below, we can see a rally from March to the end of June. We can also see a consolidation phase from June to early January where prices moved sideways around $32. Prices broke out of the $30-$34.50 trading range earlier this month. MGM is above the rising 50-day moving average line. This line was tested earlier this month. Prices are also above the rising 200-day moving average line which was tested back in October and early November. The volume of trading does not show any special features and did not expand when prices broke out to the upside this month.

The On-Balance-Volume (OBV) line shows a rising trend from early November and that suggests that buyers of MGM have been more aggressive. The Moving Average Convergence Divergence (MACD) oscillator has been above the zero line since early November but has recently narrowed towards a possible crossover or take profits sell signal.

In this weekly bar chart of MGM, below, we can see that MGM has doubled from its 2015/2016 lows. Prices are above the rising 40-week moving average line. The weekly OBV line looks like it just made a new high to confirm the price gains. The weekly MACD oscillator has turned up to a fresh go long signal.

In this Point and Figure chart of MGM, below, we can see a large 2014-2017 consolidation pattern with a potential upside price target of $51. Chart support can be seen in the $34 to $30 area. 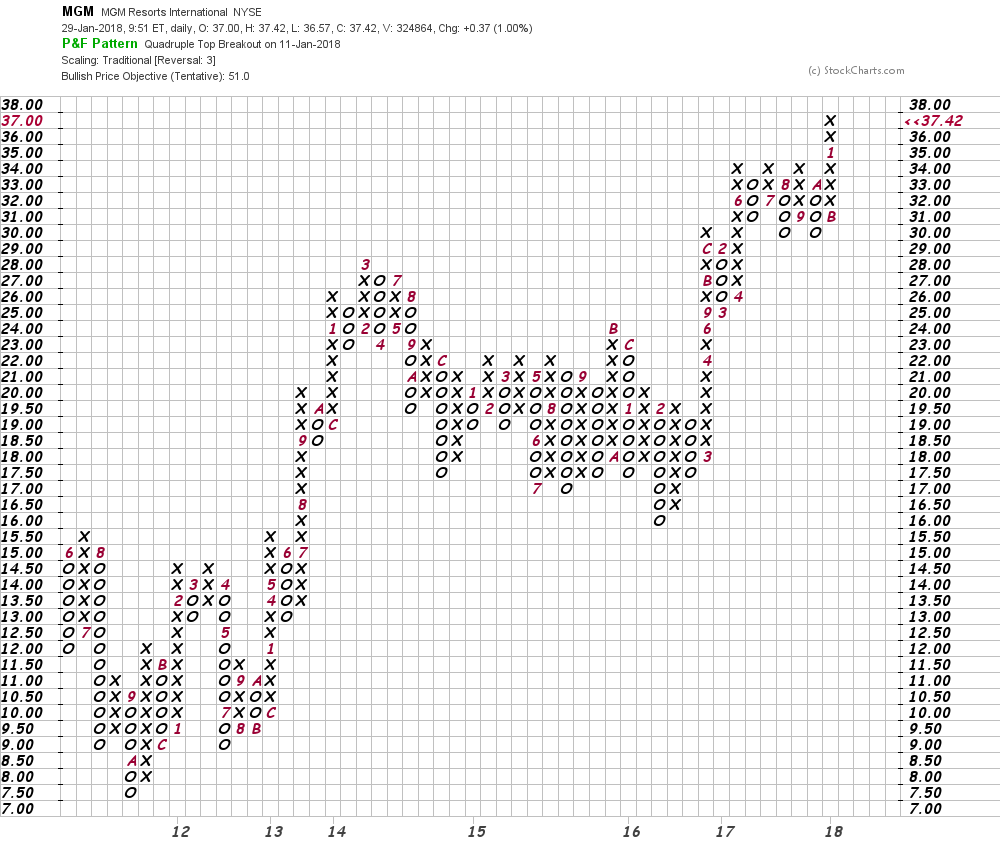 Bottom line: MGM might correct lower towards $35 or so before finding renewed buying interest. Our longer-term price target of $51 may not be seen until we have another period of sideways price action/accumulation. Traders should risk a close below $33.

Get an email alert each time I write an article for Real Money. Click the "+Follow" next to my byline to this article.
TAGS: Investing | U.S. Equity | Consumer Discretionary | Gaming

It has been nearly two months since we last reviewed NFLX.