Las Vegas Sands (LVS) has not been reviewed for almost a year, when I wrote, "Bottom line: It looks like LVS is holding a losing hand. A break below minor support in the $52-$50 area is likely to precipitate further losses toward $46. A rally back above $56 would suggest the bull is making a comeback."

With hindsight, we can see on the weekly chart below that the $52-$50 support area held and prices eventually rallied above $56 to stake the bull for another run. Let's check the latest charts and indicator to see if we should hold 'em or fold 'em.

In this daily bar chart of LVS, below, we can see a sideways consolidation pattern from early June to late October, with prices trading above and below $62. LVS crossed above and below the 50-day moving average line.

Prices stayed above the rising 200-day moving average line, and are now at one of the widest points above this indicator. The volume of trading this month has been heavier than it has been in a while. A price gap earlier this month tells us that buyers have become more aggressive.

The daily On-Balance-Volume (OBV) line rose nicely from February to the middle of June, showing aggressive buying. From June to the end of the year, the OBV was mostly neutral. This month, the OBV line moved up to new highs to confirm the price gains.

The Moving Average Convergence Divergence (MACD) oscillator turned bullish again earlier this month, but the two moving averages that make up this indicator have begun to narrow towards a possible take profits crossover.

In this weekly bar chart of LVS, below, we can see the rally in LVS that started in early 2016. The 40-week moving average line turned up in the middle of 2016 and has remained positive.

The weekly OBV line bottomed in early 2016 and recently made a new high for the move up to support and confirm the price advance. The weekly MACD oscillator is bullish.

In this Point and Figure chart of LVS, below, we can see the advance in LVS from its February 2017 low. A $77.79 price target has been reached and prices are currently pulling back (a column of "O's"). 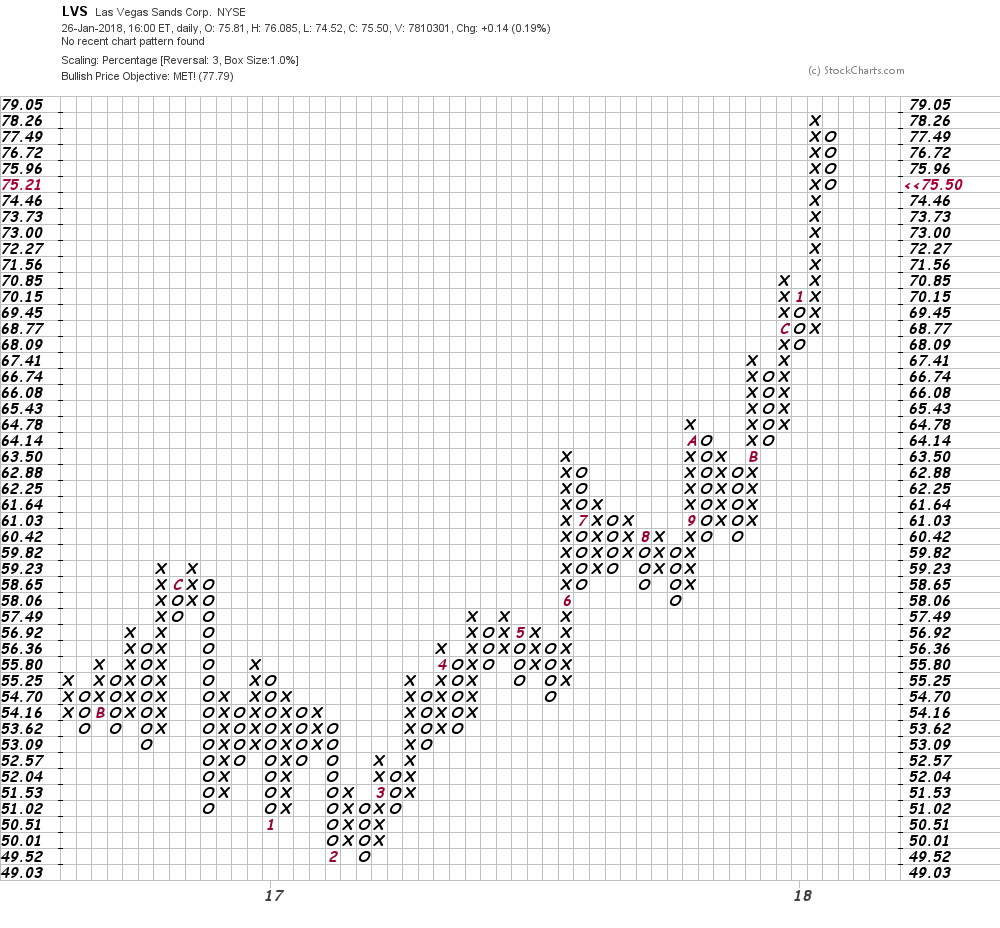 Bottom line -- prices look extended when compared to the 200-day moving average line, and with the MACD oscillator narrowing we could see LVS correct down to the $72-$70 area. Traders should be cautious about adding to long positions until we can see where buyers come back.

Get an email alert each time I write an article for Real Money. Click the "+Follow" next to my byline to this article.
TAGS: Investing | U.S. Equity | Consumer Discretionary | Industrials | Markets | How-to | Gaming | Risk Management | Stocks