"As treasury secretary, I don't see it as my role commenting on the dollar in short-term movements." -- Steven Mnuchin

This was the way they went this week. What a wild week, really. Though at times it did seem that a weaker dollar was forcing the small caps to under-perform for most of the week, the fact is that four days in, the Russell 2000, Nasdaq Composite, Dow Jones Industrials, and S&P 500 are all higher by somewhere between 1.35% and 1.5% over those days. Honestly, not too much differential when looked at as a whole. What sticks out, or rather screams out to me as we gear up for Friday trade is the resumed weakness of the U.S. dollar despite President Trump's attempt to support the greenback yesterday.

On top of that, you have seen surprise support for the U.S. 10-year after what were seen as dovish foreign policy non-events this week, and that has lent some out-performance to the beleaguered utility sector. Need I mention the transports? The Dow Jones Transportation Average has been slapped around to the tune of something like 2.7% this week, but within that group, it is the airline industry that has truly been taken out to the woodshed. That particular industry group is down more than 9% in aggregate over the past four days. Blame United Continental (UAL) for that one, as their three-year outlook on capacity guidance seems to be far more disruptive than rising fuel costs could ever be.

The President did, in a TV interview at CNBC, try to walk back the "damage" done by Treasury Secretary Steven Mnuchin on Thursday. At the time, the U.S. Dollar Index (DXY) did in fact respond, and that put a little swoon into equity, as well as commodity charts -- temporarily. Friday morning, it appears that currency traders are choosing to believe what they see, and not what they hear. And what they see is an administration that has embraced the manufacturing base, as well as the narrowing of trade deficits, through a weaker dollar. Declines have been steep of late, but I really do not see this as a problem at current levels. Should the rapid change in the slope of the decline in dollar values persist, then next week I might become more concerned. Short-term this remains a positive.

Basking in the Cold

Know who's enjoying the weaker dollar? Those long the commodity complex, as most widely traded commodities-based futures contract are priced in the U.S. currency. Know who's loving the cold winter? Those long Natural Gas. That's who. As most of the nation braces for another blast of cold weather, last sales for the February and March contracts for Natty Gas have gained this morning to more than $3.49 and $3.14 respectively. Tis' the season, and there's still two-plus months to go. Contracts out into June are still trading within a dime of three bucks.

You may have noticed the Energy Information Administration's (EIA) weekly inventory report yesterday that showed a draw of 288 billion cubic feet from the week prior. That print was, in fact, the tenth draw-down in the last 11 weeks, as well as being the sixth consecutive draw of more than 100B cubic feet. Supplies of this stuff are winding down faster than usual, gang. In fact, nationally, inventory levels are 17.5% below the five-year average for this late in January. Global demand for liquified natural gas (LNG) is not going away anytime soon, and as reported by the Wall Street Journal, the U.S. has actually imported Nat Gas from Russia for the very first time.

So, one more blast of cold air? Short squeeze? Some of that is likely already in. My play in the space remains Apache APA, which is a dual oil/gas play down in the Permian. I'll chart that one out for you below.

I sat in attendance last night at the big Gold/Bitcoin debate between Jim Rickards and James Altucher in New York City. Both performed well, and the debate was quite enjoyable from an entertainment perspective. I am sure you can easily guess who was defending what in this scenario. Rickards, with whom I am friendly, and who narrowly won the night based on audience reaction, made his case through the use of history and mathematics in an attempt to properly value gold. Altucher displayed the potential for crypto, while relying on comic relief as well as some math. I really do not think anyone in the audience had their own opinion changed much by what transpired in front of them.

One thought that Rickards conveyed while making a case against Bitcoin was in referencing an anonymous 18-year-old living in his parents' basement buying crypto with his mother's credit card. You might not know this, but I am sure that Jim did -- 18% of Bitcoin buyers have funded their investment through the use of a credit card. Now, I want you to think on how scary that is. According to data released by LendEDU and printed in the Wall Street Journal, 22% of those folks did not pay off their balance post-purchase, and instead let it ride. Roughly 90% of those folks intended to pay off their credit card balances using the profits made from said investment. Hmm. Seems to me that some crypto lovers have found a way to buy these "currencies" using credit cards as "synthetic margin accounts", only without the potential calamity of a margin call should things go awry. In that case, it's just a pile of debt that compounds at double digit interest rates. Oh, joy.

Some credit card issuers still allow cryptocurrency purchasers to link the accounts to crypto-exchanges. The ball does seem to be rolling the other way on this, however, as the story in the Journal states. Many issuers have either already curtailed this activity, or are reviewing just how to go about doing so. This should cut down, at least, on speculative buying by folks without the resources to do so, and should, at least in theory, remove a little something from the bid side of price discovery in the short to medium term. I do not own any crypto myself; I am invested in the miners as well as in blockchain technology across the equity space though. I am sure that many of our readers are at least similarly exposed if not more so, and I thought it important to bring this to your attention.

Is Apache (APA) breaking out? It might be, rabbit, it might be. You all know -- or at least those of you who read and listen to me know -- that I am long the name, and that I trade it sometimes frequently. In 2017, I recovered from what looked like was sure to be a painful long position in this name, as trading in APA churned in extremely regular and predictable fashion between August and year's end. This "gift" allowed this trader to catch his breath and repeatedly buy the stock below $40, as well as sell the name above $45.

The last time, however, I decided to make a sale, but hang on more than usual, as APA tried to break past what had been resistance for almost half a year. What does the chart tell us? The daily moving average convergence divergence (MACD) and Money Flow are both working in our favor. Relative Strength has never reached traditionally overbought territory, under-performing both the sector, as well as the broader marketplace.

This could be key. As mentioned above, Natty Gas is currently popping, and there is likely still to be upward pressure on market pricing for that commodity. Ever hear of Alpine High? Yeah, That's Apache, and that's natty gas. (By the way, Apache is also a holding in the Action Alerts PLUS portfolio, which Cramer co-manages as a charitable trust.) 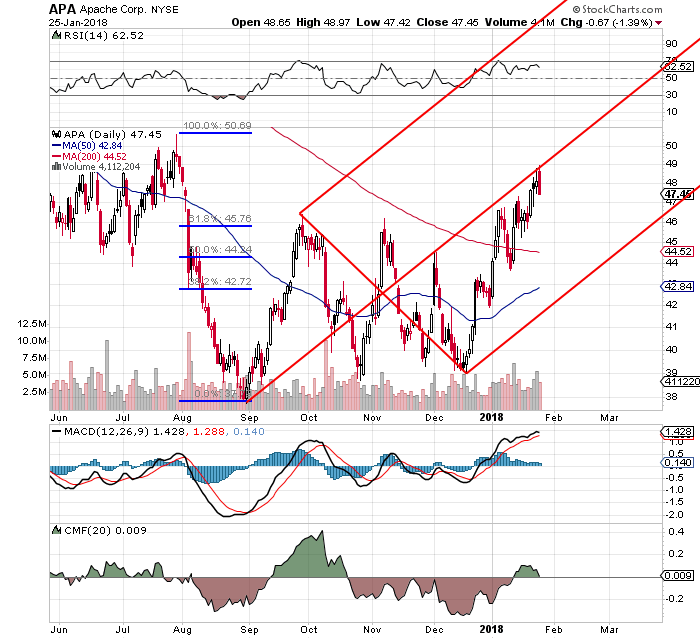 Three items stand out to me on this chart.

One. The Andrews' Pitchfork is a bit broad, but if accurate, the stock could test $50 on the next upswing for the commodity. This could happen early in February.

Two. We have already seen one fairly severe and successful test of former resistance as support. This is key.

Three. The 50-day simple moving average (SMA) is working its way toward the 200-day SMA. The two are still more than $1.65 apart, but that gap has been closing rapidly since the new year. You see a golden cross on this chart, at a time when much of the nation is freezing, and nat gas inventories are running low? Poof! You'll have the potential for a short-term pop.

Get an email alert each time I write an article for Real Money. Click the "+Follow" next to my byline to this article.
TAGS: Currencies | Markets | Energy | Investing | Gold | Commodities | Funds | Economy | Interest Rates | FOREX | How-to | Politics | Risk Management | Stocks