"Dow 20k is the rebirth of capitalism."

"It gets people excited ... they put money in the market."

"20K now becomes a launch pad rather than a ceiling ... There is nothing like rising stock prices to bring the public back into the market."

"Andrew, did you downplay the Triple Crown when American Pharoah won? ... Come on, there is something for everyone here ... Why did you get so jaded?"

I expressed my view of the lack of importance of DJIA 20k yesterday.

The market accomplishment of the Dow Jones Industrial Average finally hitting 20,000 fills the airtime in the media. However, much like being handed five $20 bills for a $100 bill, the 20k milestone in a relatively narrowly defined index is irrelevant to the markets over any time frame.

Yesterday, after five weeks of consolidation and several attempts, the threshold was eclipsed and the responses from the media, not surprisingly, have been peripatetic and giddy. I suppose the thought is that it attracts viewers and listeners.

20K Is Fodder for Market Cheerleaders

As is typically associated with a climbing market, ursine opinions are now being ridiculed as the pace of advance quickens and commentators are urging retail investors to join the party after a near four-fold increase in the indices since The Generational Bottom in March 2009.

Simply stated, to me and many others, the Dow milestone is nothing more than fodder for market cheerleaders.

The recent market leadership has been in the groups that outperformed immediately after the Trump election victory; these include financials, technology, transports, materials, industrials and construction.

I had expected a 2017 market peak in the first half of January while many (consensus?) looked for an inauguration peak.

We were both wrong.

The pluses in this week's market rise:

The negatives in this week's market rise:

Within a few days, or maybe even earlier, the market is likely to become overbought.

Back to Fundamental Reality

From my perch, the gap between economic reality and expectations rarely has been wider. Above all, the markets are now inattentive to the ideological, logistical and fiscal constraints that represent practical headwinds to the implementation of the administration's proposed initiatives.

Besides this and my other deep fundamental concerns expressed in yesterday's opening missive, "Beware the Trumpian Spring Training Illusion," there is another issue -- the length of time that the market has not had a correction.

Some Historical Perspective... and a Concern

The market advance is now almost eight years old -- over two times the average bull market's age. The last 20% correction was during the financial crisis and we haven't seen a 5% correction in almost a year. For that matter, there hasn't been a 1% decline since late October.

Not only has Mr. Market gone quite a long period without a meaningful drawdown, the recent advance is occurring at already elevated valuations that are well-extended by almost every quantitative metric (CAPE, GAAP, enterprise value/EBITDA, price to sales and market value/GDP).

Here is some interesting data from InvesTech on corrections that provide us with an historical perspective (Hat tip Zero Hedge): 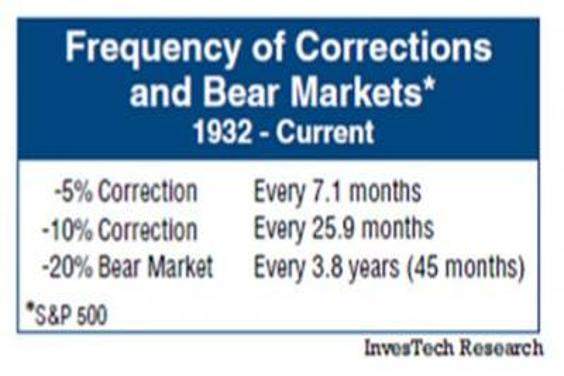 I have the following observations and investment conclusions this morning:

Get an email alert each time I write an article for Real Money. Click the "+Follow" next to my byline to this article.
TAGS: Investing | U.S. Equity | Markets | How-to | Stocks