"It takes great salesmanship to convince a customer to buy something from you that isn't built or isn't finished." -- Fred Wilson

Hail to The Chief

We'll hear from the European Central Bank Thursday morning. Until yesterday, the decline of the U.S. Dollar Index had actually had as much to do with expectations for European monetary policy as had anything said or done by this U.S. administration. The domestic macro is aplenty. The U.S. goods trade balance, December wholesale inventories (a bigger deal than you think), and new home sales will hit the tape. All of those will impact first-quarter GDP expectations. That's only today. Tomorrow, we, as a nation will get our first unadulterated look at fourth-quarter GDP, all while the parade of quarterly corporate earnings continue. All important, don't you think?

Maybe not quite as much of an impact event, from a global perception point of view, as a pro-business populist U.S. president landing among the planet's globalist elites in Davos and stealing their show. Why would this president, who has scoffed at these types of folks in the past, make such an appearance? Silly question. The man has something to sell. Before even getting to the president's much anticipated address on Friday afternoon, there will be meetings, and these meeting will not include just business leaders. The president will meet with heads of state as well, including Prime Minister Netanyahu of Israel, Prime Minister Theresa May of the U.K., and President Emmanuel Macron of France. Perhaps key will be a meeting with Rwandan President Paul Kagame, who will also be the next chairman of the African Union. Progress to be made after those insulting comments (that I will not repeat in this space) that either were, or were not made? Likely, that's the plan.

That's easy. America First. What did you expect? For the first time since Bill Clinton in the year 2000, a sitting president of the United States will rub shoulders with this largely globalist crowd. These are the kinds of folks that he ran his campaign against the year before last, and this comes just days after the U.S. launched protectionist tariffs against China and South Korea in defense of U.S. made solar panels and washing machines. This also comes immediately after the other 11 nations that were signatory to the TPP went ahead with the deal, sans the United States. The president has been disruptive, even cantankerous. I think it possible that the president often looks to open the process of eventual negotiation by knocking the other side for an unexpected loop. I will not get political in this space, but one thing the president's first year has been, undeniably so, is successful from a business and economics viewpoint.

As POTUS lands in Davos looking to attract investment from abroad, he can boast the hottest domestic economy in half a generation, and a roaring equity market to boot. Think he does not deserve the credit? That matters not one bit. The deregulation and tax cuts were his, so a lot of it is indeed to his credit, even if deficits do their damage eventually. The facts are that the president believes that he carries the big stick, and any of you that have ever tried to sell anything, know how important that is. Even better when the opponent consistently underestimates you.

The president has now started to ramp up enforcement versus trade partners that carry with them a consistently large trade surplus. This is a pet peeve for the U.S. chief. This is the president that walked away from the TPP and is currently pressuring both Mexico and Canada to renegotiate NAFTA. He obviously is not a huge fan of multilateral trade deals. The president must convince the world that "America First" is not "America Alone", that dealing with the U.S. "one on one" would be beneficial to both sides rather than enter into a broad, binding agreement that treats everyone the same even when one side brings far more demand than the other. Now, before getting all alarmed, I think this president put it plainly this week, when asked about the new tariffs being imposed by his administration. Donald Trump said, "There won't be a trade war." Simple. Know what? There probably will not be a trade war, at least nothing beyond the intention of making a point.

I think a lot on these matters, obviously. I think this president knows how to make waves. I think he also knows how to pal up to the other side if he needs or wants something. The president likes the positive attention when something "goes well". Who doesn't? Since tax reform legislation was signed into law late last year, many companies have invested in their labor forces. Much, likely, remains to be seen. There has been some foreign investment along the way, with pledges for more. To convince the rest of the world that this is where they want to be, the president would have had to have already displayed a pro-business environment. Check, the president gets very strong grades there. However, there is a problem.

The U.S. grades out very poorly on national infrastructure after several decades of neglect. Local politicians just don't go there, and voters generally avoid ballot items that will cost them money. To win over the rich and famous at Davos, the president will have to give the impression that the United States is committed to improving everything from airports to bridges to highways to railroads. Caterpillar (CAT) ? Yeah, that's obvious. I have been in and out of that name a couple of times since this president took the oath. The president alluded yesterday to a $1.7 billion infrastructure plan that is sure to have hair all over it. Let's take a look at two plays that I still have out there, and see what's playable.

This chart of United Rentals (URI) displays a stock that has benefited greatly from the very idea that there would be a boost to infrastructure spending at some point. In fact, Relative strength has literally been nailed to overbought territory since November, and has not gone below neutral since the summer.

The firm reported results Wednesday night, beating expectations for both earnings per share and for revenue. By the way, rental revenue increased 26.8% year over year. Rental gross margin increased to 47.5%. Chances are, I think, that should the president be successful, demand for what this firm does will only continue to increase.

That said, should President Trump fail, the stock has been on quite a tear and sports a debt situation that I am not in love with. Total debt still dwarfs cash on hand. Total assets come to a much larger number. That takes time to sell in an emergency, and usually at a steep discount. The current and quick ratios are weaker than my liking -- but I am old school. Sales growth is indeed strong, and net income growth needs to catch up. It very well may. 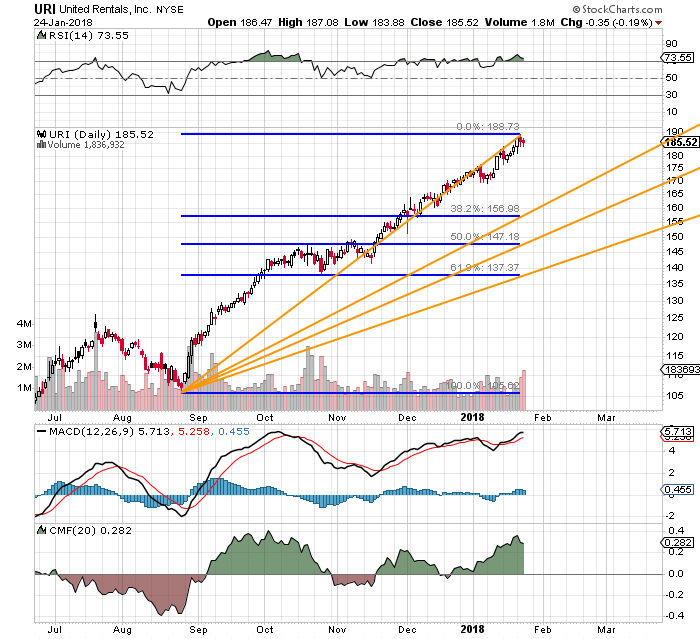 Back to the chart. Support is a long way off for a retail trader not already on board to "take a shot". I have tried to display for you rising lines of support, should the trend remain on track over the next 10 weeks or so. My thought is this. If you like the name here, then by all means leg in small. If you think you like the name, but you think this is a lot of money, and you're a little scared ... consider this.

My model shows first support rising to $185 by the end of March, and second support at $170 by that time. Last night, March $175 puts went out at $5.50. The thought here is that by making this sale, you can raise $550 a contract and benefit from a rising trend line without ever owning equity in the name.

Caution: You would be exposed to the risk of having to own the shares at $175 as the Irish take their annual stroll down fifth Avenue. At least in that case, your effective cost would be $169.50 in a name that you thought you liked at $185. No game is risk free. This may or may not be for you.

I know from your feedback that several of you followed me into this trade. U.S. Concrete (USCR) has not been a home run. We're up 3.7% in this name, which would be solid any other year. This firm does not report its fourth-quarter numbers for more than a month, so you can relax a little there.

On top of that, this stock behaves like stocks used to: with a little back and forth action, so it is tradeable as well as investable. By the way, these guys have their debt situation well under control, which as an older guy comforts me somewhat. Oh, U.S. Concrete borrows, to be sure, but all of its ratios point to a firm that will be able to meet both short and medium term obligations without issue. In addition, the shares trade at just 16 times forward looking earnings, making the name undervalued in this market. 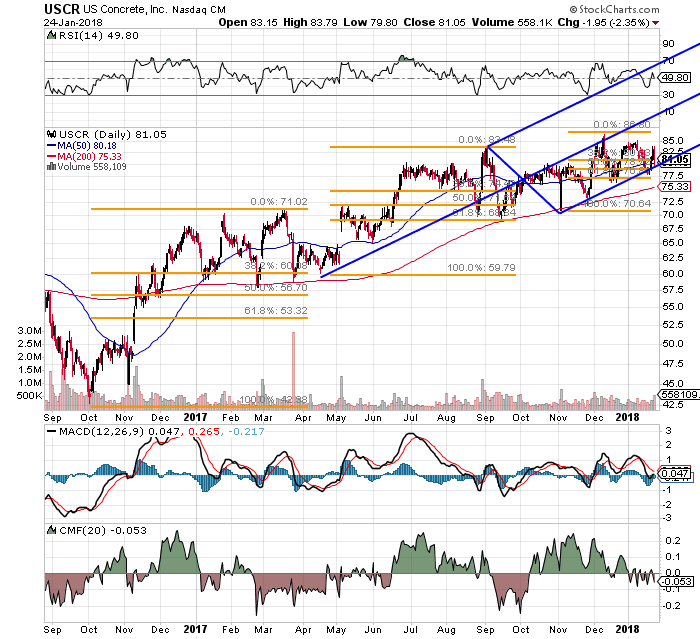 The chart illustrates just how technically this name trades, and this, my friends, is not lost on those writing the algorithms. The current Fib levels show us real time support at both $77.50 and $71 (ish). If already long the name, these are now what I see as panic points. Resistance lives around $85, but the name's strict obedience to the Pitchfork allows us to target $90, should a second attempt be made at breaking through the central trend line. I remain a fan.