Ford (F) needs to make some drastic changes and it has the perfect model to follow: General Motors (GM) .

Before I get into that, a quick look at the numbers the company reported Wednesday. Ford earned $0.39 per share on $38.5 billion in revenue. Despite delivering revenue ahead of the $36.99 billion in estimates, the company's EPS came in three cents short of expectations. The range for 2018 earnings estimates was lowered to $1.45-1.70 from expectations of $1.80. This was shared about a week prior to earnings, so it wasn't a surprise.

No matter how Ford tries to paint the results, there wasn't much to like. I suppose on could argue the dominance in the truck market via the F-series continued for the fourth straight decade, but exchange rates and commodity prices weighed on the quarter. Unfortunately, there are no expectations that commodity prices will alleviate in 2018. As far as exchange rates go, it is difficult to project where they will land during the next 12 to 18 months. That is one area I'm willing to be a little more forgiving for a company. 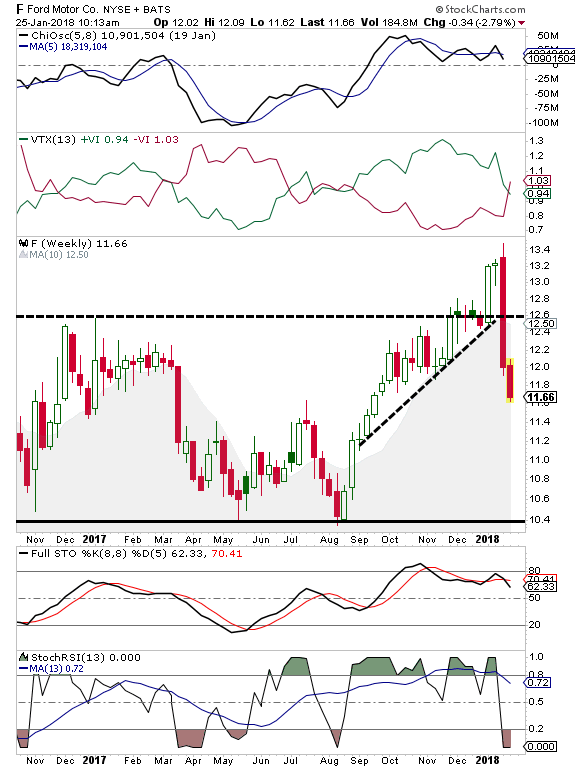 The past two weeks have been brutal in terms of Ford's technical picture. The stock has planted a firm top around $13.20 and lost support from the $12.50 area. We have now fallen back into a wide channel from the past year with $10.40 as the floor and $12.60 as resistance. There should be additional support around $11.40 and if I'm a long, I'm praying it holds. Otherwise, we appear headed to the lows from last year. Short term, Ford is oversold, but longer-term momentum and volume action indicate a longer-term downtrend is more likely than a reversal higher.

So, back to what Ford should consider. I'm being polite by saying "consider." Look to GM, which sold its European business and turned more focus toward autonomous vehicles (AV). Ford has taken some steps toward AV, and it has said 100% of its domestic cars will be built with connectivity by 2019, but this isn't enough. The company lost a billion dollars in 2017 with its business in Africa, South America, and the Middle East. Why? That billion dollars could help the company make huge strides in AV.

The business in China barely made a profit in the fourth quarter ($5 million). Europe isn't bad, but all things considered, non-domestic business is a drag on the Ford name. Sell it. Spin it. Something it. Don't keep the foreign business. It's a loss-leader.

Long-term and income holders probably won't like this next thought, but Ford should kill the dividend or at least cut it in half. And forget about stock buybacks. The company needs to invest heavily in technology and pay down debt. Even better, take that dividend and the sale of the foreign business to buy a name like Blackberry (BB) . Even better, make yourself attractive to a huge chip company focused on AV. The company needs to think differently.

Admittedly, none of this is going to happen. You can't domesticate a dinosaur and convince it to live in your backyard like a dog. Until things drastically change with the culture and the vision (aka management), Ford goes onto the trash heap with General Electric (GE) for me. There are simply better opportunities for your investment dollars.

Get an email alert each time I write an article for Real Money. Click the "+Follow" next to my byline to this article.
TAGS: Investing | U.S. Equity | Consumer Discretionary | Earnings | China | Markets | Dividends | How-to | Stocks