See that? Once upon a time, folks worried what would happen if the US Dollar Index (DXY) failed to hold 80. That really was not all that long ago. The index banged around in the low to mid 70s as recently as 2011, and did not truly blast away from the 80 level until mid-2014. Fears that the Federal Reserve's quantitative easing program would pulverize the greenback were premature as most of the planet's central banks would also engage in similar programs, some of them quite aggressively.

By January of 2016, technicians like Bruce Kamich and currency traders like Douglas Borthwick told us that the jig was up, that the area close to 103 was about as far as this pony could go. They were both right. The new U.S. President was a trade balance kind of guy. He was a manufacturing base kind of leader. In other words, without anyone from the administration embracing the idea, the new crew favored a weaker home currency.

Now, the Fed has started down the path of normalization. One might have thought that this would have put a bid under the U.S. Dollar. False. Again. The Bank of England and the Bank of Canada have now both started to move short-term interest rates higher. Though much of the planet can still post negative interest rates at the short end of the curve, as well as grotesquely perverse rates on the long end, those days do appear to be numbered.

Both the yen and the euro continue to gain versus the dollar. In both cases, economic conditions are improving enough so that both the Bank of Japan and the European Central Bank are in a position that withdrawal of crisis level policies is now appropriate, and we now have a U.S. Treasury Secretary publicly embracing a weaker dollar at the World Economic Forum in Davos. How about that? Steve Mnuchin did pull back from rooting against the dollar long term. What do I think? Honestly, as far as trade goes, and at these levels (which we can soften from without significantly damaging the economy, or the dollar's reserve status), I think he's absolutely right.

OK, gang, the numbers have hit the tape. General Electric (GE) -- a holding in Action Alerts PLUS, the portfolio that Jim Cramer co-manages as a charitable trust -- reported adjusted fourth-quarter earnings of $0.27 a share versus expectations of $0.29. Revenues missed by $2.66 billion and ran -5.4% year over year. There are a few things that matter right now. Obviously, the firm's own guidance for 2018 matters, probably just as much as segment performance. With rumors of breakup abounding for later this year, that information will attract plenty of attention.

As for the guidance, the firm sees 2018 adjusted EPS of $1.00 to $1.07, excluding non-recurring items. This is a reaffirmation of the firm's prior view and has been taken well, at least by the knee-jerk crowd. Wall Street's consensus is toward the lower end of that range, by the way. The Power segment suffered in the fourth quarter, as was expected; orders down 25%, revenues down 15%.

There was some strength in this release. Healthcare beat consensus and saw revenue growth of 6%. Aviation was flat, but also beat expectations. This is important, because these are the two areas where GE actually sees very attractive profit margins. Oil and gas was the big winner for obvious reasons. That segment of the business roared to a 69% increase, but that in fact only slightly beat expectations, and margins were far lower than they had been in 2016.

This is a very mixed report. John Flannery sees progress being made on the firm's initiatives, but that is what I expected him to say. Long term, the firm expects its effective tax rate to drop to the low 20%s, and the firm is targeting the removal of $2.0 billion worth of structural costs for full year 2018. These are positives. The firm posted a $3.5 billion fourth-quarter charge associated with tax reform, but you already knew that. Perhaps the most welcome will be a new board in 2018. Far from out of the woods, some parts of the firm clearly have some value.

It remains difficult for me to see a way for the firm to maintain the current dividend now that the train wreck that is GE Capital has suspended its own dividend that was to be paid to the parent company. The pension fund remains under-funded. For traders, we really have to see what the CEO says later on about shedding parts of this firm that are good businesses before we'll know if Wednesday morning's preopening pop was correct. I remain long, but have taken actions to reduce my effective cost basis.

I posted a similar chart a little over a week ago. Something significant has changed for General Electric and confirmed the validity of this analysis that I think important. Yes, all the weakness that had been there still is. Relative strength, money flow, the daily moving average convergence divergence (MACD) ... all gross. No doubt.

Remember I was concerned about the support level around $17.15? Well, that spot broke, and things got uglier. The stock bounced below $16. Where? Right on the central trend line of the Andrews' Pitchfork model. No kidding? Yeah, dude, this stuff actually works.

See where the name is trading pre-open? $17.20-ish? See the forward-looking Fib model? We get out the firm's earnings call above $17.15, and we could be looking at prices closer to $17.60. A huge call maybe, but I am in this trade with you, and this is what I think. A failure here, and we sell more calls. 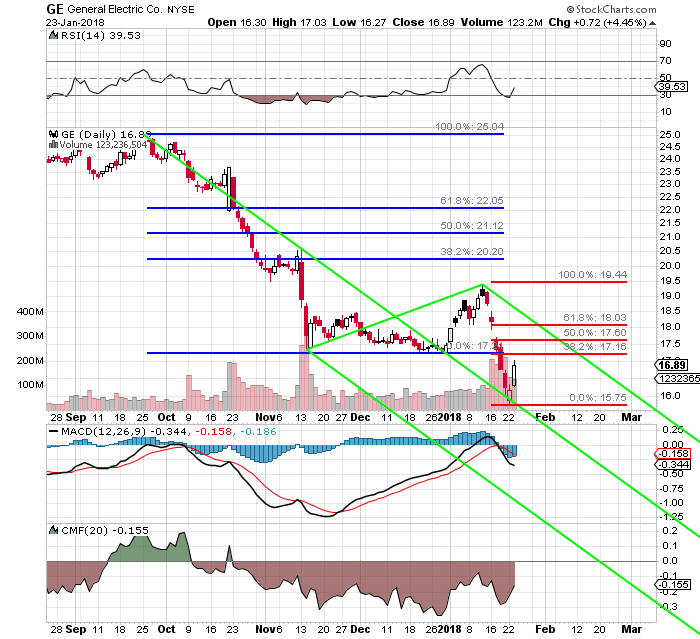 Get an email alert each time I write an article for Real Money. Click the "+Follow" next to my byline to this article.
TAGS: Investing | U.S. Equity | Energy | Industrials | Earnings | Markets | How-to | Stocks