Western Digital Corp. (WDC) was examined at the end of November, when we wrote, "WDC has arrived at the moment of truth, so to speak. Prices are trading softer Wednesday morning and we will see if the 200-day moving average line will again act as support. The risk becomes clear -- two consecutive closes below the 200-day average line would tell me to reduce my long exposure."

With hindsight we can see in this chart, below, that WDC did close below the 200-day line and has generally been on the defensive the past two months. What does the next two months look like for WDC?

In this daily bar chart of WDC, below, we can see that prices are currently above the flattening 50-day simple moving average line and testing the cresting 200-day line. Prices could close above the 200-day line but rallies into the $90-$95 area since June have failed. The daily On-Balance-Volume (OBV) line peaked in September and has been moving lower until early this month. The OBV line has turned up with the price action but it is far from a new high. The Moving Average Convergence Divergence (MACD) oscillator recently crossed above the zero line for an outright buy signal.

In this weekly bar chart of WDC, below, we can see that the slope of the 40-week moving average line has turned from bullish to neutral. Prices are testing the underside of the 40-week line and they may or may not break above it. The weekly OBV line has been neutral since April but the MACD oscillator is poised for a cover shorts buy signal and maybe an outright go long signal in the weeks ahead -- depending on the price action. 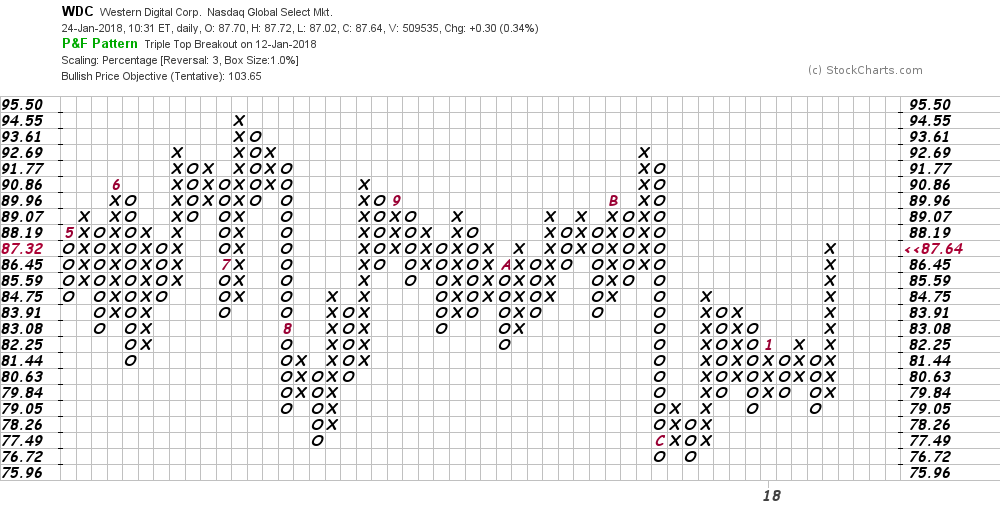 Bottom line: Has the sideways to lower price movement for WDC since April a distribution before a bigger decline or has it been just a correction before renewed strength? Tough call right now. I would be impressed with price strength above $95 and a close below $76.72 would put the bears in control.