Steel Dynamics (STLD) broke out of a long-base formation in early 2016. STLD has made two big rallies and two corrections and looks poised for yet another leg higher.

In this one-year daily chart of STLD, below, we can see most of the rally from the early 2016 low. STLD consolidated its early gains from April to mid-October in a trading range around $24. From mid-October to early December STLD rapidly climbed to $40 from $24. Prices are above the rising 50-day moving average line and the rising 200-day average line.

The On-Balance-Volume (OBV) line has been neutral in the most recent two months, but it was preceded by a strong move up signaling aggressive buying. In January as prices weakened the 12-day momentum study made equal lows for a small bullish divergence.

This three-year weekly bar chart of STLD, above, shows the consolidation/base pattern from 2014 to early 2016 around the $18 level. The 40-week moving average line has been tracking an upward slope since early 2016. The weekly OBV line has tracked the swings in STLD, both up and down. The MACD oscillator has been in a bullish mode all year but the two averages of the indicator have narrowed. The price strength in STLD today could reverse the narrowing and a possible sell signal. 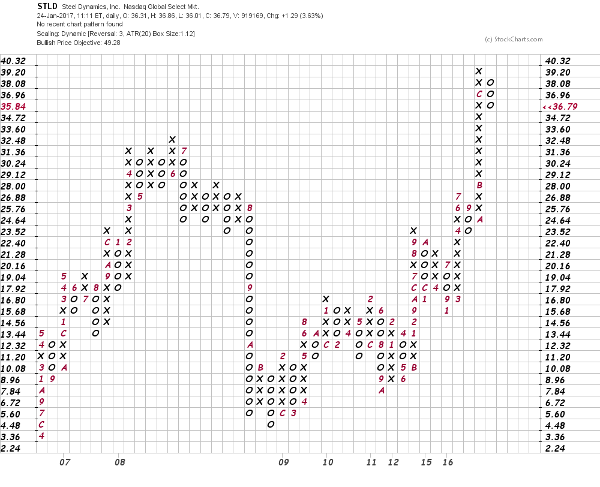 This long-term Point-and-Figure chart of STLD, above, shows a breakout over the 2008 highs and a possible long-term price target of $49 or higher.