AK Steel Holding (AKS) is poised for a major upside breakout on my charts. Really. Let's take a closer look at this comeback industry.

In this daily chart of AKS, above, we can see a stock that has rallied from just $2 to over $11. There is a three-letter word for that: WOW.

The climb in AKS is not a flash-in-the-pan rally in that prices traded sideways around $5 from April through October. This sideways consolidation formed the stable base for further gains. Prices are up strongly this morning, putting AKS back above the rising 50-day moving average line. The 200-day moving average is also rising.

In the past two months AKS stalled and pulled back and the On-Balance-Volume (OBV) line has declined, signaling some more aggressive selling. The trend-following Moving Average Convergence Divergence (MACD) oscillator has been declining the past two months but now could be set for a turnaround.

In this three-year weekly chart of AKS, above, we can see a large rounded-bottom formation the past two years. Prices are above the rising 40-week moving average line. The weekly OBV line shows a very strong rise and only a minor dip in the past month. The weekly MACD oscillator is positive but has narrowed. With prices up strongly today we may not see this indicator cross to a take profits signal. 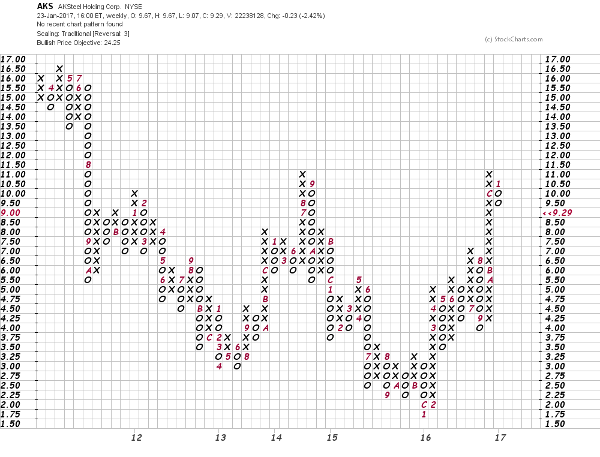 In this longer-term Point and Figure chart of AKS, above, we can see a base or bottom formation that goes back to 2011. A weekly trade at $11.50 will turn the chart bullish and generate a long-term potential price target of $24.25.

Bottom line: New longs and older longs should consider raising their sell stops to a close below $9.

Get an email alert each time I write an article for Real Money. Click the "+Follow" next to my byline to this article.
TAGS: Investing | U.S. Equity | Earnings | Commodities | Stocks

Everybody Loves a Comeback: Is GameStop's a Trick or Treat?

Let's see if this is just another head fake, or the real thing, like that of my personal fave A-Treat.

Shark Bites: Trulieve Cannabis Is High on My List Into the Third Quarter

TCNNF is a 'seed-to-sale' company that offers 155 products.

Here's Why FedEx Has Excelled

Looking at the shares or the options markets, there are several ways to play FDX.