"When somebody challenges you, fight back. Be brutal, be tough." -- Donald Trump

Did you think he was kidding? Whirlpool (WHR) is expected to report fourth-quarter earnings tomorrow after the closing bell. For holders of those shares, the president of the United States came bearing gifts on Monday night. After closing a first year in office, which from an economics and business perspective can only be described as incredible, President Trump got the ball rolling on year two by imposing steep tariffs on imported solar panels and modules as well as on imported washing machines.

The administration had been petitioned on washing machines by Whirlpool Corp., whose main competitors in the space have been South Korean: LG Electronics, and Samsung. The order states that for washing machines, the first 1.2 million units imported will see a tariff of 20% imposed. After that, the number ramps up to 50%. Know what that's called where I come from? That's called hardball. LG, at least in the early going, traded lower in response. Whirlpool gained 3.2% in overnight trade. Ironically, after that rocky start, shares of both LG and Samsung rose in Korean trading.

The administration also got aggressive with solar panels, this time a jab against not South Korea, but China. This particular tariff starts at 30% in the first year, and then tapers off over four years to 15%. First Solar (FSLR) screamed to more than a 5% gain in extended hours trading. Within this particular order is an exemption for the first 2.5 gigawatts imported.

What I think is that both of these orders are not nearly as tough as they could have been. They both seem to have short timelines, and as we just mentioned, there is this exemption that eases the first year of the solar panel restriction. Basically, this gives the U.S. firms involved a chance to get back in the ring and make a fight of it. Do these moves make people angry? Of course. Does this hurt U.S. consumers? Possibly at the start, but you know what? It's not as if nobody saw this coming.

This president has been talking about making moves such as this for a year. Both LG Electronics and Samsung are now building plants in South Carolina and Tennessee, which most likely is what the president was going for. It's no secret that President Trump abhors trade deficits, and with foreign competitors planning to build products domestically, that's a boost to employment, which is something else the president mentions often.

I don't. Two weeks ago, Secretary of Commerce Wilbur Ross completed his Section 232 probe of the steel industry and sent that report to the president along with his recommendations. The president has 90 days to respond, of which 79 are left on the clock. Then, there will be talk about taking action in regard to the intellectual property of U.S. firms. You did know that this president took office with an agenda, right? Now, get fired up. The game afoot for us is not to judge our environment. You may have feelings on policy. That's great. Never let them impact your ability to adapt to your environment. We're amphibious. We survive anywhere, anytime, and under any conditions. Now get out there, and bring home something for the family to eat.

All hail the mighty Netflix (NFLX) . The firm targeted 6.3 million new subscribers for the fourth quarter. The firm delivered 6.36 million subscribers outside of the U.S., and another 1.98 million domestically!! Crushed it; 117.58 million streaming subscribers globally. Say what? Want me to type that again? You could just re-read the number.

Despite raising prices and rising competition from the likes of Amazon (AMZN) , Apple (AAPL) , Alphabet's (GOOGL) YouTube, and eventually Walt Disney (DIS) , average streaming hours per account increased by 9% year over year. Know what else is up 9%? The shares overnight, that's what. This is precisely why you heard me say that I hung on to half of my long on CNBC yesterday on Closing Bell. So, what does the future hold?

Though I do have core positions in most of the "FAANG" names -- Action Alerts PLUS holdings Facebook (FB) and Apple, Trifecta Stocks name Amazon (AMZN) , Netflix and Google parent Alphabet -- I have largely looked at Netflix as more of a trade as opposed to an investment, as that rising competition, (by the way, the firm did mention in the call) is not going to go away anytime soon.

That said, the younger generation is not going to be coming back to traditional television anytime soon either. It seems to me that the limits of streaming entertainment are simply the limits of exposure to, and availability of, the internet. Netflix is looking to earn $0.63 a share next quarter. Wall Street is at $0.57 on this. The firm also looks to tack on another 6.35 million customers. Let's chart this one.

How about this for a chart? We start with the selloff that came to a conclusion in early July. The Pitchfork is so broad that it allows for anything, and tells us nothing. All of our supporting indicators closed in wild states of optimism, as cash flowed in. You know that I sold some ahead of the close last night, to protect what were already large gains. That's not a mistake, mind you.

The FAANG door swings both ways, and that was merely precautionary. What to do with your long? Or the rest of mine?

Adjusting my Fib Levels for an opening that I expect to be in the mid to high 240's (247ish), I certainly would not chase it here if I were flat the name. You might see a push as risk mangers make a call on those short the name. That could force an artificial high even higher than what we saw overnight. 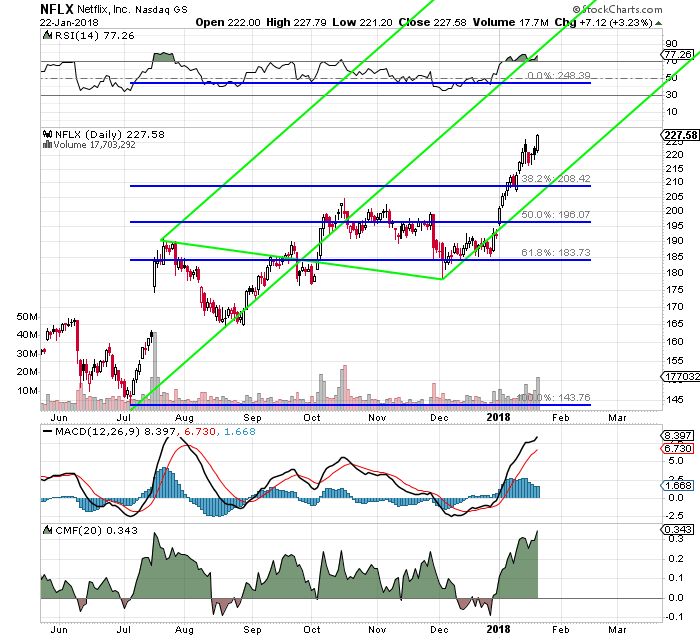 I'll tell you what. I see prices in the $250s, and I'll puke the rest of these with the intent to come back and get them back in house when we visit the $208/$210 neighborhood prior to the next quarterly earnings event in mid-April. We're about ringing the register in this neck of the woods. That's job one.

... because I love you, and because it's a good chart. 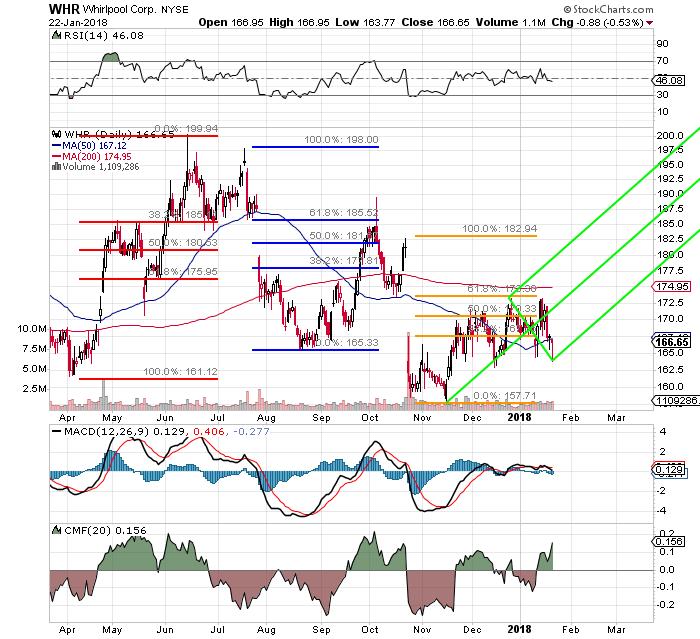 What do you see here, sportsfans? Not such a hot-looking chart, is it? Relative strength? Meh. Daily moving average convergence divergence (MACD)? Boring. Money Flow? Back and forth. Nothing sustainable. Now, check out the Fibonacci levels. I laid a few of them on you in historical fashion, just to show you how much attention the algo writers pay to the Fibs in this name.

Red Fibs, Blue Fibs, Orange Fibs. See the pattern? Like ringing a bell for dinner, it looks like you can count on these. The question now becomes: Where does the stock land after the actions taken last night by the president? Resistance appears to loom at $173.25. The stock is trading around $172 in the early going.

Is it safe to leg in there? I think $170 is a safer point of entry, and I think if you wait, you can get some there. If you go that route, $167 is where I see the panic point. Sell a $175 call expiring Friday? Interesting, depends on where those open, and certainly we don't go there naked. Capeesh?

Get an email alert each time I write an article for Real Money. Click the "+Follow" next to my byline to this article.
TAGS: Investing | U.S. Equity | Regulation | Markets | Technology | Industrials | Consumer Discretionary | Earnings | How-to | Gaming | Politics | Risk Management | Stocks