ServiceNow (NOW) rallied in 2016, with only short-lived corrections lasting around a week. NOW corrected for much of December before firming this month. Does this subtle difference mean prices are in a stronger or weaker position going forward? Let's look closer at the indicators and charts.

In this one-year daily chart of NOW, above, we can see how prices have reacted to the 50-day and 200-day moving averages in recent weeks. In early December, NOW broke sharply to the downside, breaking the flat 50-day moving average line but stopping short of the rising 200-day average. Prices rebounded quickly, to retest the underside of the 50-day before slowly declining to test the 200-day line again.

In the new year, NOW has rallied above the 50-day average and now dips to the average line are being bought. Throughout this six or seven-week correction, the On-Balance-Volume (OBV) line has only declined a little. The Moving Average Convergence Divergence (MACD) oscillator crossed in early January for a cover shorts signal and is now above the zero line for an outright go long signal.

This three-year weekly chart of NOW, above, is shaping up nicely. Prices are above the rising 40-week moving average line, which has been tested recently. The weekly OBV line has been bullish for much of 2016 and turned neutral in recent weeks. The weekly MACD oscillator is above the zero line and is poised to generate a fresh go long signal. 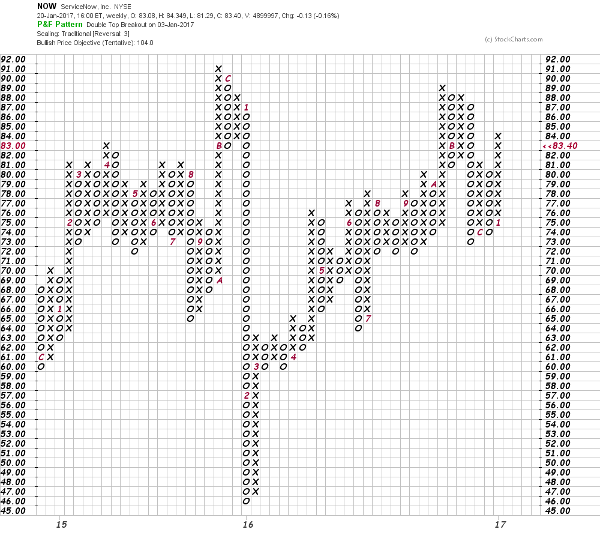 This Point and Figure chart of NOW, above, shows two important points. First, we can see higher lows on this chart for the past year. Second, an upside breakout yields a potential longer-term price target of $104.

Bottom line: aggressive traders could go long NOW at current levels using a close below $79 as a risk point. Add to positions on a close above $90.

Get an email alert each time I write an article for Real Money. Click the "+Follow" next to my byline to this article.
TAGS: Investing | U.S. Equity | Industrials | Markets